Doctor Who Review: The Wedding of River Song 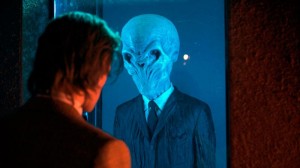 Tick tock, goes the clock…..But not any more. The silence will fall when the question is asked.

If you have been watching doctor who the past 6 years, tonights episode offered you little nuggets of fun that have appeared over the years. The doctors death is a fixed point in time, it cannot be changed and it always happens. As the doctors time ends he seeks out an old blue friend to find out what the question is. The question that will result in his silence. We find out that in the distant future the doctor is asked this question, and answering it would result in the destruction of the universe and time itself. Why does the doctor always find himself causing universe explosion?

The time has come for the impossible astronaut to kill the doctor. But River has a different plan and prevent the doctors death. But this is a fixed point in time, this cannot change. The result is time itself stops, The date stops, the time is 5:02 pm, always. All of time is occurring at once, and we see dinosaurs, the roman empire and ancient egypt all at the same time. The doctor is aging, but the rest of the world is not.

Amy comes and takes the doctor to the pyramid, where inside she explains the eye patch that they are all wearing. Its an external storage device that allows them to remember our creepy alien friends of the silence. Taken into the great room, we see River Song. The doctor is not happy she saved him. All of time is falling apart. He touches here and time inches forward by a second and she orders him handcuffed. You see, they are at the center of the explosion in time, touching results in time moving forward and results in the doctors death as it was suppose to be.

The silence have escaped their cages and are after the doctor, so Amy, River, Rory and the doctor go to the top of the pyramid where River says they sent out a distress signal for help. The doctor says what is the point? Nobody will care. River explains that he has done so much good, did he really think that in his hour of need they wouldnt come? She said the “sun spots” they are reporting are false, it is the whole of the universe here and responding “yes we will help”.

The doctor decides to go ahead and marry River Song and has Amy and Rory give him permission. And just as he does it he tells River a secret, he whispers it into her ear and she smiles. He says “that is my name”. They Kiss and time begins to move, the doctor dies and the story moves forward as we remember it. Or does it? We see Amy and River drinking, talking about the doctors death and the death of the silences Madam at Amys hand and how she wishs she could talk to the doctor, but hes dead. River responds with, “is he?”. When the doctor meet the second Teselecta in this episode, he did actually ask one thing of them. The doctor did show up to his own death as time demanded, but he wasnt the one who was shot, the Teselecta was. The secret he told River was to look in his eye and she found out he was inside the robot and he had tricked them all.

The doctor delivers the head of his blue friend back for save keeping and his friend realizes the doctor is alive and cannot figure out how. But he says, the future will still come and the question will be asked. The one question that should never be answered, the question that is as old as time itself…………………