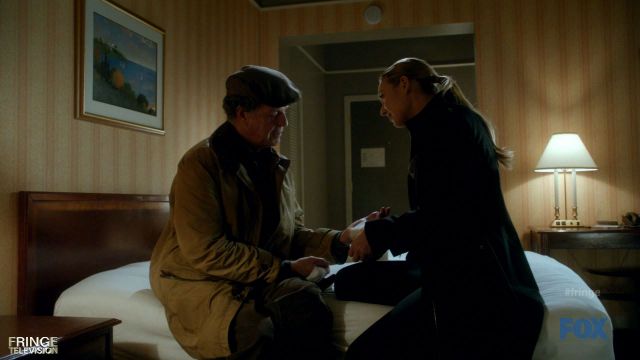 “Where is Peter Bishop,” is a question that fans of Fringe will no longer have to ask themselves as this week’s episode of Fringe, “Subject 9,” finally answered that question, in what was easily the strongest episode of the season so far.

“Subject 9” opened up in Olivia Dunham’s apartment at 5:59am, as she was awoken not just by the shrill sound of her alarm clock, but by a giant mass of blue energy that seemed to attract every bit of metal in her bedroom. The mass vanished as quickly as it appeared, and seemed to somehow reset the last minute of time she had experienced, once again causing her alarm clock to sound, just as it did right before the entity appeared. When she arrived at Walter’s lab and told him of her experience with the entity, he immediately sent Olivia along with Junior FBI Agent Astrid Farnsworth to take samples from Agent Dunham’s apartment. When they arrived, Walter watched their investigation from a camera that Astrid had with her. As Walter was watching, magnetic interference suddenly caused the video feeding back to his equipment to become distorted. When the distortion ended, the video showed Walter that Olivia was crying out for help as the entity returned just as she was taking a sample from her bathroom. The last thing Walter heard was Astrid crying out to Olivia, screaming her name. Walter was flustered, and asked her shakily what was wrong. But Astrid replied puzzled, and didn’t appear aware that anything had happened. But then that very same event unfolded, Oliva being locked in the bathroom by the entity, only this time we see it from her viewpoint, rather than Walter’s. Upon returning to the lab, Olivia realizes that Walter’s camera’s somehow recorded the event of the entity returning before it actually happened, just as the entity had somehow made Olivia re-experience the minute of time before the entity appeared.

While investigating the tapes of the events from Olivia’s apartment, he realized that the entity reminded him of one of the children from the cortexiphan trials that he ran with William Bell 27 years earlier (of which Olivia, then only 7 years old, was a part of). This particular child, whom Walter remembered was “subject 9” in the experiments, and that the child could astral project, with the side-effects being similar to the magnetic disturbances caused by the entity that invaded Olivia’s apartment. He suspected that the entity may be an astral projection of the now-adult Subject 9, who may remember Olivia from the experiments ran on them, and is trying to reach out to her for unknown reasons, and that the time warps experienced whenever it shows itself are side effects of the magnetic field that it is causing.

This scene was just one of many opportunities that this episode took to explore the differences in the new timeline caused by the erasure of Peter Bishop, this time being that Olivia had not yet met any of the other “cortexiphan kids,” whereas before Peter’s erasure she had come across some of them. Likewise, Agent Astrid Farnsworth didn’t seem to know anything about the experiments, whereas previously she had been. These changes, like all of the other ones that have been introduced (such as Olivia having never discovered previous Partner’s involvement in the creation of the virus that killed him, and the fact that she killed her abusive stepfather, rather than just wounding him,) work well within the confines of the story, and work as ways to enhance the story, rather than just as quick-fix “ret-cons” to previous stories.

Besides trying to figure out the cause of the mysterious blue entity, another plot line in “Subject 9” was that of Walter’s growing fear of being sent back to St. Claire’s mental institution, where he spent 17 years as a resident. Early on in the episode, Walter spies a form in Olivia’s Jacket pocket sent to her by the institution, requesting her evaluation of Walter, complete with her recommendation of whether or not he should be sent back to St. Claire’s. His fear of returning to the institution were so intense that he attempts to prove his sanity to Olivia by exiting accompanying her to track down “Subject 9,” to figure out whether or not he is causing the entity to appear, despite the fact that his crippling anxiety has left him holed up in his lab for three straight years. Oliva and Walter traveling together provide a lot of amazing scenes between the two, something that has been sorely lacking thus far this season. One such scene that was particularly powerful was a moment when Olivia arrived at Walter’s room at the hotel they were staying at, to find him smashing everything in sight, freaking out completely over the perception that there are millions of deadly germs out to kill him. Olivia calmed walter down immediately, making him feel better about his outburst, and even convincing him to go with her to get a root beer float at a nearby bar.

Eventually Walter and Olivia track down “Subject 9,” whose real name is Cameron James. Cameron quickly recognized both Olivia and Walter from his time during the cortexaphan trials. While he was relieved to see that Olivia made it out of the trials without any emotional damage, he had a great dislike for Walter, whom he blamed for messing up his life, giving him debilitating magnetic abilities that make it impossible for him to live a normal life. Eventually the three discovered that Cameron wasn’t causing the blue energy at all when the entity revealed itself to the three of them, but that he can disperse the the entity using his magnetic abilities. Walter then devises a plan for Cameron to tap into the energy of a nearby power grid and harness it to destroy the entity once and for all. The entity revealed itself again as soon as they arrived at the grid, but right when Cameron was about to destroy it for good, the mass of energy suddenly took a humanoid form – that of Peter Bishop. Olivia, still not remembering Peter but recognizing him as the man from her dreams, stopped Cameron from delivering the final blow that would kill the entity, causing it instead to simply disperse. It was a powerful scene, and Ana Torv did a great job showing Olivia’s underlying love for Peter, despite the fact the fact that she can’t remember consciously who he is.

Just as the blue, Peter-shaped entity disappeared, the episode cut to Riden Lake, the site where Peter was supposed to have died in this new timeline, where  saw the blue entity reappear, the energy having been dislocated there by Cameron. Only this time when the entity dissipated, Peter Bishop himself came bursting through the water to the lake’s surface, with a look of utter shock on his face. After a quick shot of a fisherman pulling Peter out of the water and onto his canoe, the episode moved back to Olivia, who received a call from Agent Broyles right as she was about to leave the power grid with Walter. Broyles tells her of a man (Peter) who was pulled out of Riden Lake, by a fisherman, who knows detailed classified information about Fringe Division that he couldn’t possibly know. What’s more, he says, he claims to know all of them personally. The episode ended with a scene of Olivia and Walter at the hospital, ready to meet this man who had been haunting the both of them for  so long. Peter recognized Olivia as soon as she entered his hospital room, and was relieved that she was there. “Olivia, thank god you’re here,” he said. Olivia, who still can’t remember who Peter is or how she knows him, simply responds by saying “Who are you?” The episode cut to black then, leaving us viewers hanging by our seats as to what would happen next!

“Subject 9” is definitely my favorite episode so far of the season. While it’s great to see Peter back on the show, the reason I loved the episode so much was because of the amazing scenes between Ana Torv and John Noble, who really did an amazing job of selling just how close Walter and Olivia are in this new timeline. Noble also did an amazing job of showing just how disturbed Walter has become without Peter to ground him over the past three years, and I’m excited to see how Peter will react to this version of his father.

Fringe airs on Fox at 9/8c and full episodes are available online at Http://www.fox.com/fringe