Fringe Review – And Those We’ve Left Behind 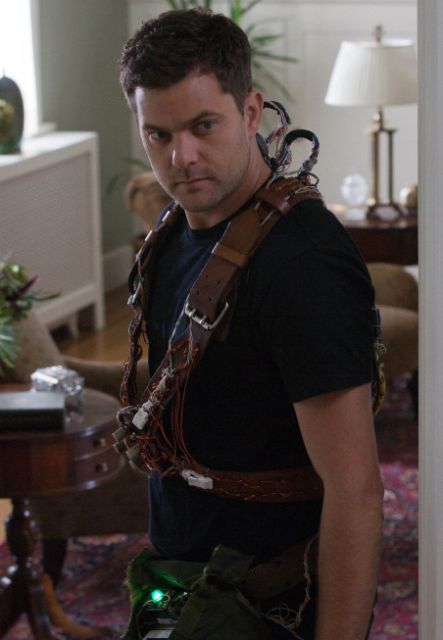 Throughout this season the concept of time has been a major theme that the show has been exploring. “And Those We’ve Left Behind,” continued this trend, as the Fringe team investigated a series of time displacement events that were happening around the city.

“And Those We’ve Left Behind,” saw the Fringe Team investigating a series of unexplainable occurrences of deja vu all throughout Boston. But when the gang comes to the scene of an apartment that reverted to a fire-damaged state from four years prior, they realize that these occurrences aren’t deja vu at all, but slips in time. At first it’s assumed by everyone that Peter was somehow responsible for the time slips – even Peter himself. After being deleted from, then re-inserted into, the timeline, Peter reasoned, it would make sense that such a thing would cause time to have some “hiccups.”

The investigation of these time slips was the vehicle that the show used to finally get Peter out of his cell for the first time since he was re-inserted into the timeline. It was really nice to see Peter taking an active role in the investigation of the Fringe case. Besides just giving Fringe fans a much-deeded Peter-fix, it also was a good way to show the changed dynamic in Peter’s relationships with his would-be friends. Walter, Peter and Olivia were slowly becoming something of a family unit before Peter was deleted, and it’s eerie to see how completely undone that’s now become. Walter is haunted by the very sight of him, and Olivia seems wary in the type of way that makes me think that she remembers him better than she’s willing to admit to herself.

As the team Investigated, they discovered that the type of radiation left behind at the scene of these time-slips was man-made. This, according to Peter Bishop mused after discovering this fact, meant that someone had created a device that was causing these events to occur. So, despite the eerie time-slip-connection, it appeared that his arrival was not the direct cause of the slips. Over the course of this investigation Peter himself had a few time-slip events, experiencing and re-experiencing the same event, then skipping ahead in time by a few minutes. While it was implied that this was due to whatever phenomenon was causing the other time-slips, it was never said outright. I couldn’t help but wonder if perhaps there’s something more at play with these time disturbances than the explanation eventually given in this episode.

What seems to support that line of thought is that in last week’s episode, “Novation,” Olivia had a brief time-slip very similar to the ones that Peter had during this episode. It was a small, blink-and-you’ll-miss it moment, but Olivia definitely seemed shaken after it happened. Like Peter’s slips, this could definitely be explained away by the causes of the deja vu incidents being investigated in this episode, but I’d think that if time was taken to film Olivia’s slip in the previous episode with the intent of paying off in “And Those We’ve Left Behind,” the moment would have…well, paid off during this episode. But the moment didn’t pay off – in fact, the moment wasn’t even referenced in “And Those We’ve Left Behind.” With any other show I’d say that this would be a case of me thinking far too deeply about things, but with Fringe, I’ve discovered that there really is no such thing as “too deep.”

As the investigation moved on, the team discovered, with Walter’s reluctant help, that there was a pattern to these time-slip incidents: they were all happening in a spiral, and all of them involved people or things shifting into the states they were in exactly four years in the past. Using Walter’s discovery, the team is able to locate the area where the device causing the time-slips is located: the basement of an Electrical Engineer living in the suburbs. The engineer’s name was Raymond, and he built the machine according to theories written by his wife, Kate, who was Physicist before succumbing to early-onset Alzheimer’s. The purpose of the machine was to create a “time bubble” that existed at some point in the past. Raymond created the machine so that he could be with his wife again, at a point before her mind was destroyed by her disease. What Raymond didn’t realize, however, is that activating his machine caused “time displacement” events, where other time bubbles were created in random areas, where people would suddenly be in pockets of time that were in the past. These “displacement” events were what was causing the strange events that the team had been investigating all episode.

It was Peter who figured out how to breech the time bubble to safely enter Raymond’s house and who eventually convinced him to shut the machine off by telling him of the havoc it has been wreaking, and would continue to wreak. The scenes between Raymond and his wife were heartbreaking – here was a man who wanted nothing more than to see his wife again. “All of the things that you did for me…that you were for me,” he said to her in the time bubble, “I never got to be those things for you.” Raymond may have been the one responsible for all of the chaos caused during the episode, but he was not a “bad guy.” He was simply a broken man, who wanted to be whole again.Throughout this episode, I found myself connecting to Raymond, and wanting him to somehow succeed so that he could be with his wife again, the consequences be-damned. His good intentions and honest emotions made Raymond a great antagonist. One of the reasons Fringe works so well is because all of the drama on the show is very organic; derived from characters, and how they are reacting to the plot, rather than thinly related plot-devices used to manufacture drama. “And Those We’ve Left Behind” is an excellent example of this.

The final revelation that “And Those We’ve Left Behind” presented before the episode came to an end, was that Raymond wasn’t able to get his machine to create time bubbles at all until the exact day that Peter was re-inserted into the timeline. So while it was Raymond’s machine that was directly creating the time-bubbles, it was Peter’s arrival that weakened the fabric of space/time to the point where such an event could occur in the first place. This fact, combined with Olivia’s time-slip in “Novation,” really seem to suggest that Peter’s arrival has affected the timeline in ways that are much bigger than the Fringe team realizes.

“And Those We’ve Left Behind” was an amazing episode, and one of the seasons strongest so far. It a really great job of telling a self-contained story that connected to the larger mythology of the show without being weighed down by shared continuity. There are definitely some big things brewing for the the Fringe team, and this episode really made me excited for what’s to come in next week’s mid-season finale.

Fringe airs on Fox at 9/8c and full episodes can be found online at www.fox.com/fringe eight days after their initial air-date.