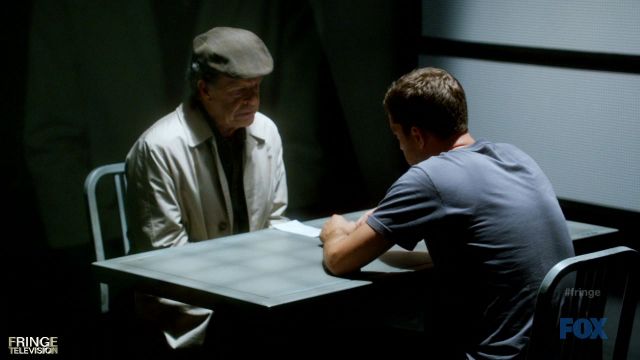 Last Friday’s episode, “Novation,” saw Peter Bishop wrestling with this question, as he dealt with returning to a version of existence very different than the one he left behind.

There were two main plot-lines traveling through “Novation.” The first involved the ramifications of Peter’s re-insertion into the timeline, and what his sudden arrival meant to all of the other characters. As the episode began, Peter was locked away in an FBI detention center and trying desperately to figure out why no one seemed to remember him. He pleaded with his would-be friends, rattling off government secrets one after another to try convince them that he was telling the truth about his identity. At first it only led to more frustration, as none of the Fringe team seemed able to wrap their heads around his claims, and continued to meet him with suspicion. Eventually it was Agent Broyles who decided to put Peter’s claims to the test, and ordered that a DNA be performed on him. While Broyles did not himself believe Peter’s story, he was far too familiar with situations where the impossible had turned out to be the truth to dismiss the possibility outright. When the test came back as positive, confirming that Peter was, indeed Walter’s biological son, Agent Broyles was at a loss. He went to Walter himself with the news, hoping that the scatter-brained scientist would have some sort of explanation for how, exactly, such a thing could even be possible. Walter explained that the version of Peter currently in the detention center must be from a third universe, where Peter had not died in the process of being transported from the other universe.

The scenes where Walter and Peter interacted were powerful ones. By the time Peter finally came face to face with his father, he had begun to realize the complications inherent in his return. “It all makes sense now,” Peter said. “I was supposed to die, on that night, in both universes. But when I didn’t, I became a paradox and now, for the two worlds to heal, I had to be deleted.” With this realization, Peter no longer wondered why his friends and colleagues couldn’t remember him. Rather a new, more frightening question came to mind: “But if I’m already dead in both universes, then why am I here? How am I back?” He begs Walter for his help to discover “what went wrong,” but the encounter with his son was too much for Walter to take. He broke down and stormed out of the interrogation room, returning to his lab and leaving Peter alone once again.

It was interesting to watch Walter attempt to make sense of Peter. Clearly, he was fascinated with this man who claimed to be his son, and yet at the same time he was completely terrified to accept that it was the truth, regardless of the DNA test. The guilt of unraveling the other universe weighs more heavily on Walter in this timeline given that in this version of events, the trip ended with Peter’s death rather than his rescue. Not only did he have to deal with losing his son all over again, but also that it happened as a direct result of his own actions. He felt as if he failed his son, and to come face-to-face with him after decades of guilt was just too much for him to take. To Walter, this version Peter was a walking manifestation of all his emotional struggles. Walter said as much himself, during a scene where he discussed his guilt surrounding Peter’s death with Nina Sharp. “I saw him, Nina,” Walter said. “The man. I saw my boy in that man’s eyes. The way he looked in the ice….floating away from me. God help me, I saw the eyes of my boy in a man’s face. It filled with… indescribable joy. But I don’t deserve joy. For anyone else, this would be received as a miracle, to get a glimpse of their dead son. But why should I be rewarded for what I’ve done?”

In one of the final scenes of the episode Walter once again visited Peter in his cell at the FBI building. Once there, he confronted Peter, telling him exactly how he felt about his apparent resurrection. “Every day, for the past twenty-five years, I’ve tried to imagine what you would look like as a man… my son,” Walter said. “But I don’t deserve this. I don’t deserve you. I realize now this was my punishment. You were sent to tempt me, to see if I would repeat the mistakes of the past. You shouldn’t be here.” From this line, the heaviness of Walter’s guilt is made clear. He went on to say to Peter that wherever he came from, it didn’t matter, and that he could not help him. “I tried to help a boy, a version of my son, twenty-five years ago,” Walter said. “But that boy was never my son, and neither are you.”The scene seemed to foreshadow that Walter’s search for the truth about Peter’s sudden existence will be representative of this emotional struggle. Only when he accepts his role in his son’s death, and forgives himself for it, will he truly accept that this version of Peter and the boy that died in the lake are one in the same, and that he was deleted from time by the observers. That acceptance will be what motivates Walter to help Peter solve the mystery of “what went wrong” in the Observers attempt to rectify the paradox created by his continued existence.

The other main plot-line in the episode was that of a murder committed by a female shapeshifter. As the episode went through its paces, the Fringe team discovered that the shapeshifter had kidnapped a scientist in the hopes that he could perfect a flaw inherent in her kind’s design. The team initially had trouble tracking down the biomechanical monster. It was only with the help of Peter that they were able to make any significant progress on the case at all. Hearing the team discuss the shapeshifter’s involvement in the murder, Peter saw an opportunity to prove his worth to the people who once trusted him. He called out to them, and revealed his vast knowledge about shapeshifters, and told them that with the right tools, he’d be able to figure out more about this new breed of the creatures. Eventually, while examining the dead and captured body of one of the new shapeshifters, he discovered a tracking device that allowed the Fringe team to track the shifter they’d been chasing. Unfortunately, they didn’t catch up to her in time. Not only did she get away, but she managed to force the scientist to fix her design flaw. What’s more, Peter discovered another terrifying aspect of this new breed of shifters. Unlike the previous model, these creatures are capable of replicating DNA down to the very last molecule, making it impossible to detect one.

It was fun to see Peter working with the Fringe team again, and reminded me just how missed his presence has been on the show. It also was interesting to see just how different the dynamic is between Peter and the versions of his friends in this new timeline. While there is a slight tone of familiarity between them all, his interactions with them feel very different than they were before. It won’t be easy for Peter to reconnect with these people, and I can’t help but wonder if things will ever be the same again between Peter and the rest of the Fringe team.

The episode came to an end as we caught up with the escaped, and newly cured, shapeshifter as she reported back to her handlers in the other universe that the mission to find a cure for her kind’s flaw was a success. Her handlers reply by saying, through the two-way typewriter she is using to contact them, “Understood. Begin preparations. We are sending the others.” It was an ominous ending that raised a question as it answered one. We now officially know that the shapeshifters are being sent from the other universe. But is it Walternate who is responsible for their creation, or a rogue element of his government using Fringe Divisions resources? Only time will tell, and I’m sure that in true Fringe fashion, the answer will not be easy for the Fringe Team to discover.

Fringe airs on Fox at 9/8c and can be found on http://www.fox.com/fringe 8 days after their original air-date.