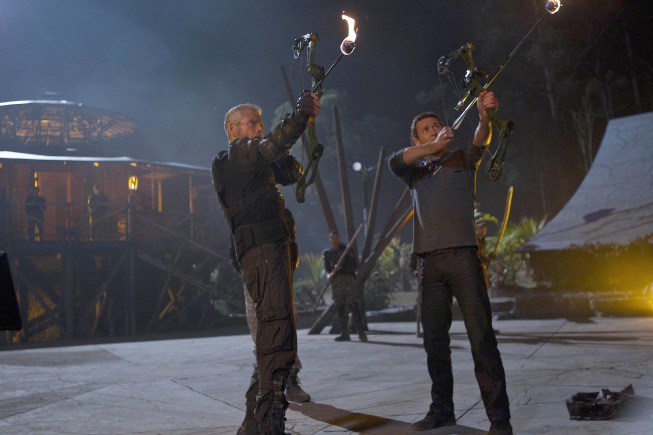 One of Skies friends is sick, having eaten an unformented fruit that could have killed him. But what the doc finds is far from a fruit issue, its a 25ft parasite in his gut. Dr. Shannon preps for surgery to remove the parasite. Meanwhile Jim and his youngest go to the “eye”. A computer brought with Taylor to Terra Nova that has earths entire history on it. Jim shows this to her and they look at where she was born and rollercoasters.

Maddie and her new boyfriend go OTG for the day, on a date. While out in a field, they notice something in the sky, a meteor. Everyone in Terra Nova sees it too and Terra nova is in for a surprise. After a meteor hits near by, an EMP caused by it fried all the electronics, leaving Terra Nova unable to defend itself. Word makes its way to Mira and she is ready to strike.

Jim is trapped in the eye room with his daugther and Dr. Shannon must now do the extraction of the parasite the old fashion way, by hand. The sonic blast from the meteor also brought in scores of wounded people into the medical center and everyone was having to work without any technology. Their rover dead, Maddie and her boyfriend had to make their way back, and hide in a tree overnight as they made the neary 6 mile treck back to Terra Nova.

Once Jim gets out of the room, thanks to a little wiggling through a tunnel by his daughter, he catches up with Taylor to find out that an attack by a large dinosaur is coming. They use an old fashion (for them) compound bow with flaming arrows to start a fire just outside the gates to fend off the animal. Just as they do that they notice the animal was being herded to them, meaning Mira was already here.

Jim and Shannon find Miras men taking the box she was after and they fight them for it. Shannon runs after the man with the box but falls short and Mira now has her box. With the circuit chip machine up and running, and new circuits being made, things start coming back online at Terra Nova and Taylor and Shannon are left to wonder who tipped her off as to exactly where to find the box.

Meanwhile Mira meets in the woods with a mystery person……Taylors son. Upon getting the box, he opens it and shows that its a computer of sorts. And on it, are all his calculations..but for what? A way home or is it a way to Terra Novas downfall?