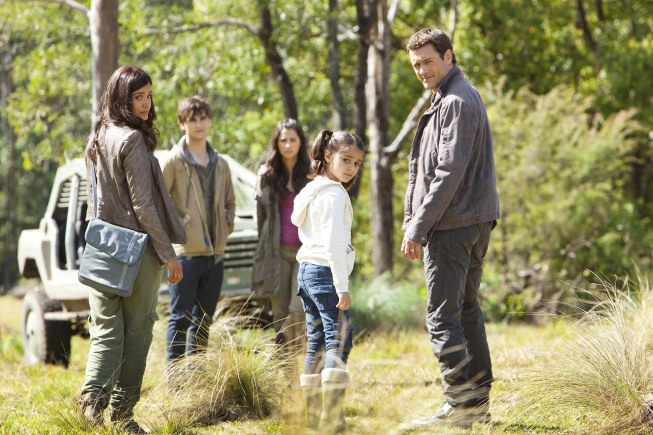 Now you see me, now you….wait never mind you saw me. This week we find out rather easily who the trader was inside Terra Nova and frankly, does that surprise anyone? The day she told Josh she knew someone who could help, I had my doubts about Sky. So now that the obvious is out of the way, the real story this week was also in the title, but focused on two different characters, Taylor and Mira.

Taylor decides to leave the camp for a few days to “do some personal things” and leaves Jim in charge of Terra Nova and finding the spy among them. Jims search gets a big break when they notice someone in the woods shining a light towards Terra Nova and they notice a return light. Upon making it to the spot, the trader, Sky, had run off but not before having cut herself on the very glass she was using to communicate, leaving a single drop of blood in some paint thinner that Jim hopes can be used to extract the identity of the spy.

OTG, Taylor goes to the falls where his son has written all of his calculations, and much to his disappointment his son is nearly finished with the math needed to make the portal go both ways and result in the future stripping Terra Nova of everything there is. And wouldnt you know, Mira was near by and caught Taylor off guard. Seems she likes to visit here too to check on his sons progress. Mira takes Taylor to her rover  but not before Taylor attempts an escape and grabs a plant blade he can use to cut his ties. During the long walk Taylor and Mira talk a bit and we learn a little more about eachs persons motivations and the fact that Mira isnt much different from Taylor.

Mira is an ex-convict, arrested for fighting against the government of 2149. Because of that conviction she would never have a chance to get on the pilgrimage to terra nova to protect her daughter and give her a better life. Then she was given a chance with “a powerful group, that have deep influence” and they rigged the lotto and got her along with a large portion of others on the 6th to come to Terra Nova and take out Taylor and make sure his son finishes his work and gets the portal working both ways. 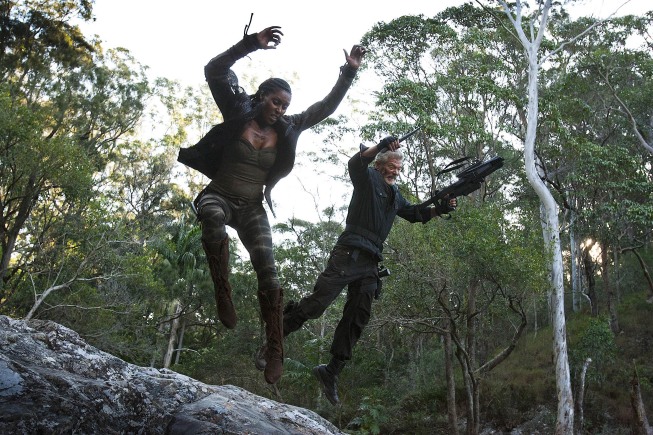 Taylor and Mira soon realize they are being followed and Taylor uses the distraction to take control of the gun and take Mira instead. They arnt able to get far when they are ambushed by 2 adolescent dinos trying to mark their territory and we see Mira and Taylor jump over the falls to get away. The gun lost and only 2 knives, they must work together to survive the night.

Back in Terra Nova, Dr. Shannon is running the blood sample to find out who the trader is and Sky is very nervous. Sky got on the work detail OTG with Josh so she could sneak away to the Sixers. We find out the reason is because she needs medication for her sick mother, a medicine the Sixers have and Terra Nova doesnt. It seems Taylor and others think her mother is dead and Sky is hiding all of this and giving them intel in return for medication. Once back in Terra Nova working on her night shift in the infirmary, she uses an acid to destroy the sample when nobody is looking. The testing got far enough to tell them it was a female and with the list of those who had lab access, they narrow it down to 47 possible people. Jim is closer but will Sky slip up?

At the camp site Taylor and Mira discuss Taylors son and her daughter. She talks about wanting to give her Daughter a better life and that she isnt sorry for whats shes doing if it helps her. Taylor may be upset with his son but still cares about him and if he is okay. Taylor tells Mira in many ways they are a lot a like and could work together some day, if not for this divide. Mira simply answers that we will see how it all ends once his son finishes his work.

This week, I felt the reveal of Sky was weak and just too easily given to the audience but at the same time was obvious from episode 2 and needed to be revealed sooner rather then later. Now we see the Sixers arnt so bad either, and the previews for the upcoming finale prove that we will have a 3rd group with which to fight and the question remains, who will make it out alive?