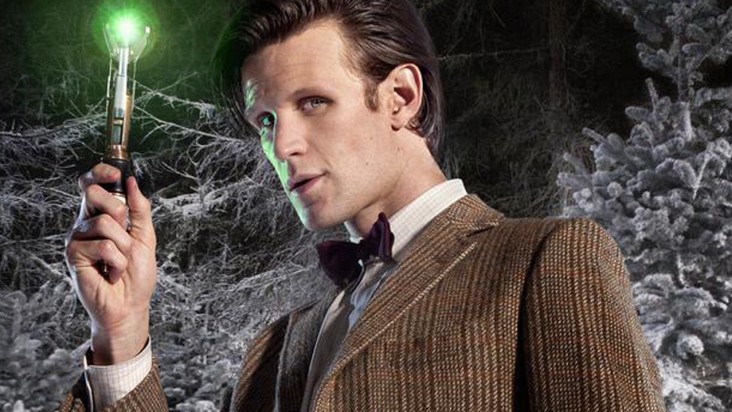 This years Doctor Who was aptly named The Doctor, The Widow and The Wardrobe. For those who dont know, its a homage to C.S. Lewis’ Narnia book The Lion the Witch and the Wardrobe.  The two children Cyril (Edmund) and Lily (Susan) are sent away from the bombing that are beginning in London at the start of world war 2. Their mother Madge had met the doctor 3 years before the war, when he fell to earth in a space suit. After helping him, the doctor told her if she ever needed anything, just make a wish and he would hear her.

3 Years later the war had begun and Madge got the sad news that her husbands plane had gone down and he died. She dared not tell the children with Christmas so close. So they left to a home outside of the bombing area to meet the caretaker of the home. What she didnt know is the caretaker was her spaceman from 3 years before, the Doctor.

The Doctor went all out to make stay fun for the kids and exciting, but Madge yells at him and the kids and tells them to go downstairs. She is upset over the news of her husband and the fact that she knows she will have to tell them at some point but cant bare telling them now, as they would forever associate Christmas with the death of her father. 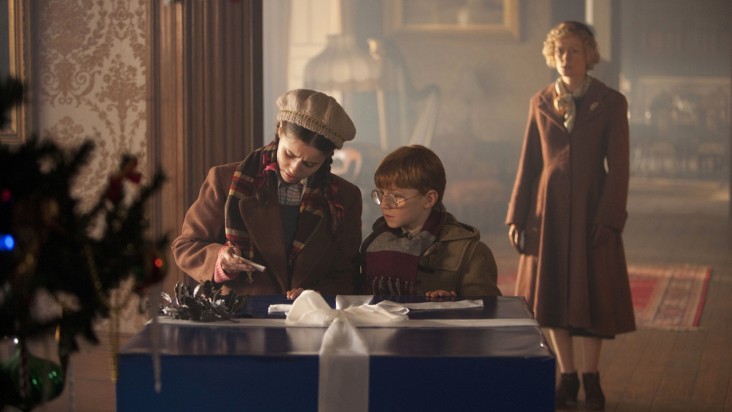 Cyril notices a large blue present next to the tree and sees it glow. That night when sleeping he sneaks out to see whats inside, while his sister goes upstairs to see what the Doctor is doing. Cyril opens the box and notices a forest on the other side, complete with snow. After a little hesitation and grabbing his “torch” (those of you who have seen or read Narnia, know what i mean), he enters the forest. The Doctor has a device (when doesnt he?) that seems to detect something going on, and asks Lily if her brother is sleeping. In the forest Cyril notices what looks like an ornament grow on the tree and he grabs it. But it begins to grow in his hands and he drops it. It breaks open and we pan away to Cyril running. We dont get to see what was in it, but Cyril decides to follow the little foot prints and see what it was.

This is the moment we are all screaming at the TV, dont follow it! The Doctor and Lily catch up to see Cyril go into the box, and when they enter he is long gone. The doctor tries to explain the fact that crossing dimensions like that there is a time difference but Lily just looks at him funny. Cyril finally finds a tower in the middle of the forest where the footprints end, and he enters it (again us all screaming at the TV).

The doctor is concerned by the fact that as they follow the trail, Lily points out the footprints that arn’t Cyrils are getting much bigger. Lily keeps asking where they are and the doctor explains they are on another planet. He thought it was a safe and quiet place that he could surprise them with on Christmas but something is wrong, the Doctor can hear the trees speaking and whispering. 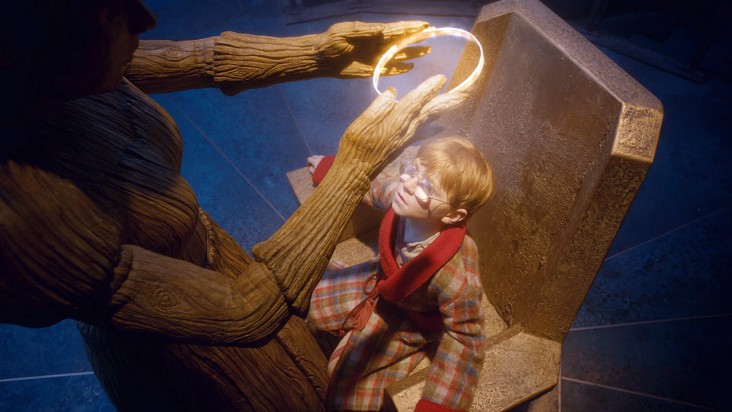 Inside the tower, Cyril sees a large wooden person sitting on a seat and he decides to venture up to the top of the tower. Once he arrives at the top, he is greeted by another wooden creature, what looked like a queen. She corners him forcing him to fall into the seat and puts a crown of sorts on him. The doctor and Lily arrive just as this is happening and they cannot get the door open to find out what is happening to Cyril. Meantime Madge goes looking for the kids in the house and finds the box open and sees whats inside. She is now in the forest looking for her kids.

She is stopped in the woods by a machine and armed guards. It seems they plan to harvest this forest using Acid Rain and they must all leave or risk getting killed. But she is determined to find her kids and takes them hostage but they beam out before she can use them to help take their ship to where her kids were.

Inside the tower, the doctor talks with the trees and finds out all the spirits of the forest are trying to escape, from the rain that burns. But Cyril they said is too weak. So the doctor tries to take the crown and it burns him and he is unable take the crown either. They said he is also weak. However when Lily takes it, she has no problems and they say she is strong. The doctor urges Cyril that they must leave but he refuses to move until their mother arrives. 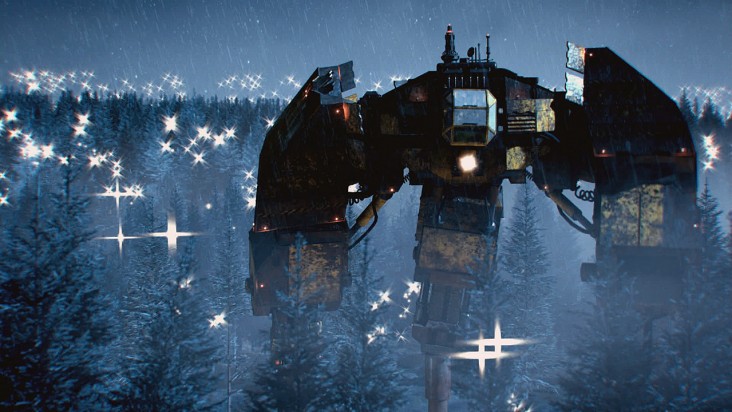 Outside they hear a large machine and the doctor realizes what it is and that they are used to harvest these forests. But what makes him smile is who is controlling it, Madge. She makes it inside and the trees give her the crown and she starts to take in the entire forest spirits. The doctor finally understands why he and Cyril were weak but Madge and Lily were strong. They were female, and Madge was the most powerful of all for nature, a mother. The trees launch the top of the tower into the time vortex and they speed off.

The Doctor helps Madge remember her husband in order to get them back home but she ends up showing the children that their father may have died in war and she hadnt told them yet. But this is doctor who and the impossible normal happens. Well when she was traveling through time back to home, the ship gave her husbands plane a light to follow and it guided him safely home and he was waiting outside for them.

The episode ends with the Doctor and Madge talking and Madge remembers he was the spaceman. She urges him to stay and not be alone for the holiday. Nobody should be alone. The doctor decides to make a stop at an old friends home. Remember all of time thinks the doctor is dead, and when the door opens its Amy Pond. She is upset, its been 2 years since the doctor was last seen and both refuse to hug each other. At least for a minute and then they hug. Just before coming in, Amy says we have a place set for you, and the doctor says but how did you know i was coming? She replies we always have a place set for you. And for the first time the doctor crys happy tears……how human!