Once Upon A Time Review – The Heart Is a Lonely Hunter

By: Robert Prentice
fairy tales once upon a time review the huntsman the queen

It wasn’t pleasant to watch Emma find out about Graham and Regina’s affair last week, but now things are reaching a breaking point. We begin this episode with Sheriff Graham drinking away his woes while throwing darts at a picture of a deer with incredible accuracy. When Emma enters, her defenses kick in and she tries to leave the bar without making a scene. Graham aims a dart right next to her head, kicking off an argument that ends with Graham confessing he doesn’t feel anything for Regina and then kisses Emma. She wants to have nothing to do with him, but something has happened to Graham. He is beginning to remember something. But as Emma leaves him, he goes crawling back to Regina’s house. 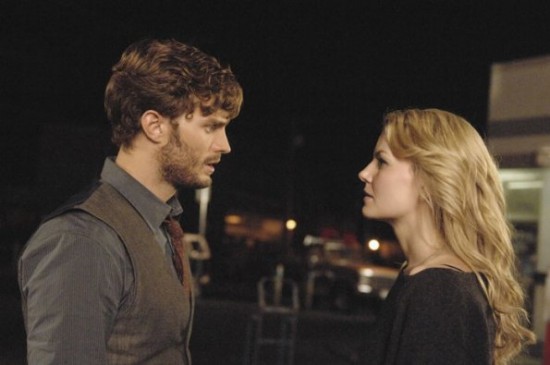 In the Enchanted Forest, the Evil Queen and Snow White mourn the passing of Snow’s father. The Queen promises that she will console Snow, but then consults with her mirror, claiming that half of her revenge is complete – all that is required now is to kill Snow herself. The mirror suggests to use a Huntsman, someone without a heart, and finally we are introduced to Graham’s counterpart. The Huntsman kills a deer and thanks it for its sacrifice, and is joined by a wolf with two-colored eyes.

Graham awakens from a “dream” in which he describes his hunting experience to Regina. She urges him to stay, but he leaves and runs into the wolf from his dream – the same wolf that caused Emma’s accident.

In the morning, Emma finds flowers on the table and throws them in the garbage, only to learn they are Mary Margaret’s, given to her by the doctor. Mary warns Emma about the wall that keeps out hurt – and love. Meanwhile, Graham goes into the forest after the wolf, and runs into Mr. Gold who has been doing “gardening” (I have to think he was burying a body!). Mr. Gold suggests that dreams are memories of a past life.

The Huntsman goes to get a drink and ends up in a scuffle with the local riffraff. The Queen, observing from her magic mirror, decides that he is “perfect.”

Graham finally catches up with the wolf he has been looking for. A pat to the wolf’s head and Graham sees a flash of Snow White. He runs to the school, to tell Mary Margaret he believes they know each other – from a different life.

The Queen has the Huntsman brought before her; while trading barbs, the Huntsman agrees to kill someone if the Queen outlaws the hunting of wolves, his foster parents.

Mary Margaret talks with Graham. While she also recognizes that she doesn’t remember how they met, she insists that Graham is ill with a fever, and that he needs to go home and rest. She drops a hint that Henry believes in past lives, that they are all fairy tale characters. 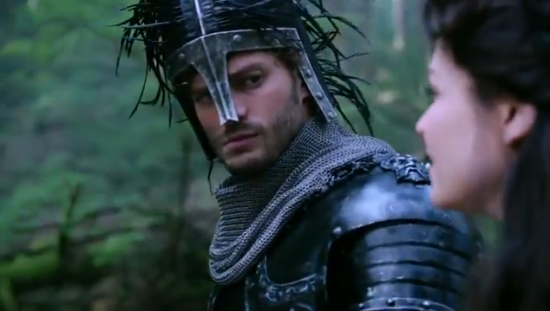 Finally, we get a brief exchange between the Huntsman and Snow White. Snow realizes that something is off about this new “knight” and realizes it is the Queen’s doing; she escapes for the moment.

Regina shows up at the Sheriff’s office to threaten Emma (hasn’t she threatened enough without results?) to stay away from Graham. Emma is putting “thoughts” in his head. Meanwhile, Graham shows up at Regina’s house – this time to talk to Henry.

The Huntsman catches up with Snow White, who is composing a letter to give to the Queen. After reading it, the Huntsman sends Snow into the forest with a whistle, promising it will bring her aid (I assume this is how the animals helped her find the dwarfs).

Graham visits with Henry and discovers his past origins as the Huntsman. Emma arrives, concerned that Graham is now seeking help from a little boy, and tries to convince him he does indeed have a heart. However, the wolf shows up again. Perhaps Emma will finally take the curse seriously? The wolf leads them to the vault in the middle of the cemetery where the Queen evidently kept the Huntsman’s heart.

The Huntsman reads Snow’s letter to the Queen; Snow says she is forever sorry and forgives the Queen for killing her. The Queen, in a rage, burns the letter, and we are given a clue as to Snow’s “betrayal”: the Queen told her a secret and Snow White did not keep it. The queen places the heart in a box and realizes it isn’t a human heart when a small drawer in the wall does not open.

After a fruitless search, Emma and Graham are interrupted by Regina. She wants Graham to return home with her, but he finally stands up for himself, saying that nothing would be better than their relationship. Regina blasts Emma, but Emma retaliates, saying it was Henry who came to find Emma and Graham who kissed Emma, and both, according to her, “were miserable.” Finally the argument comes to blows, but Graham breaks up the violence. Emma leaves, and Graham follows. Graham helps patch up Emma. Regina goes into the crypt to visit her father, and after pushing the lid off the coffin, descends the now revealed stairs.

The Queen rips out Graham’s heart and places it inside the drawer, telling him that from now on he is hers and she controls him.

Regina arrives at the wall of drawers, full of hearts, proving that she does know exactly who she is. Emma kisses Graham, and he immediately remembers everything that has happened – unfortunately he does not tell Emma the truth; instead he says, “I remember.” Regina does the dirty deed by crushing Graham’s heart into dust. Heart wrenching it is, but how could a show like this keep someone alive who knew the truth? Er, except Henry.

Once Upon A Time returns January 8.