Fringe Review – Back to Where You’ve Never Been 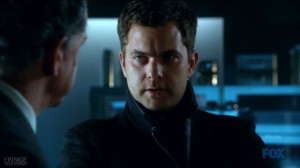 “Back to Where You’ve Never Been,” saw Peter taking a trip to the alternate universe, after realizing that Walternate (Walter’s “over there” double who, in that version of the universe, is the Secretary of Defense) was the only man who could help him get back to his home timeline, as “our” version of Walter was far to guilt-ridden to help him. Peter made the trip down the rabbit hole hoping that Walternate would help him gain a better understanding of the “doomsday machine,” that was used to join the two universes together in the first place. Along for the Ride was Lincoln Lee, was sent along with Peter by Olivia, who wanted him to do some snooping around to find more information about a recently introduced “new” brand of shape-shifiting solider. Namely, Agent Dunham was hoping that, while on the other side, Agent Lee would find proof that it was Walternate himself that had created these monstrosities.

A lot of important moments unfolded in this episode. First, there’s the fact that Peter for the first time stated in plainly that he felt no attachment to this new timeline. It was a point driven home by the episode’s opening scene: a dream sequence in which Peter is back in his own timeline, with “his” Walter and Olivia. While watching the episode, however, I couldn’t help but wonder if Peter has a “home” to get back to in the first place. When the observers deleted him from the timeline, it seemed clear to me that they weren’t creating a new universe where Peter died as a child, but rather changed the timeline of the existing universe(s) to set events on the path they had been destined to travel down in the first place. If this is true, then the versions of Walter, Olvia, and all the rest of Peter’s friends that he’s familiar have been wiped from existence completely. That being said, nothing is ever as it seems in the world of Fringe. It’s completely possible this new timeline is actually little more than a new set of Universes. I can see it going either way, and it’s a pretty powerful question: Is there a way for Peter to get back to his “home” existence, or is he little more than an accidental relic from a version of reality that has been completely unraveled?

Another important revelation in this episode was that Walternate legitimately had nothing to do with the creation of the new shape-shifters – he was just as wary of them as all of the other characters. Especially so, given that every level of his government has been infiltrated by these creatures – his chief scientist was replaced by one, as was Fringe Division’s leader, Agent Broyles. We discover this fact as Peter himself does, when Walternate states that he will do everything in his power to return Peter home, but only if he delivers a message to “our” universe: that he has nothing to do with the new shape-shifters. He will be believed, Walternate reasons, because Peter has no stake in the situation, as he is from neither of the universes.

The final, giant, revelation of the episode was that the creator of the new, biomechanical, shape-shifters was none other than David Robert Jones – a fearsome villain from the first season of Fringe, who was believed to be dead – killed by Peter himself, no less. But as the episode ended the twisted scientist was very much alive, and definitely up to no good. It was a plot twist completely out of left field, at least for me, but it’s one I’m really happy with I always loved David Robert Jones as a villain, and have long thought that he had the potential for a much larger role in the show’s mythology then he was at first given.

Overall “Back to Where You’ve Never Been” was a great episode. While the first half of season four operated very strongly in a “case of the week” format, with each case revealing the season’s overall story-arc little by little, this episode definitely demonstrated that the second half of this season will operate more on the serialized format that fans of Fringe are more familiar with. While I did love season 4.1, I do think that Fringe works much best as a serialized show, so I’m glad to see it returning to this format.

Fringe airs on Fox on Fridays at 9/8c, and episodes are made available on Fox’s official website eight days after their original air date.