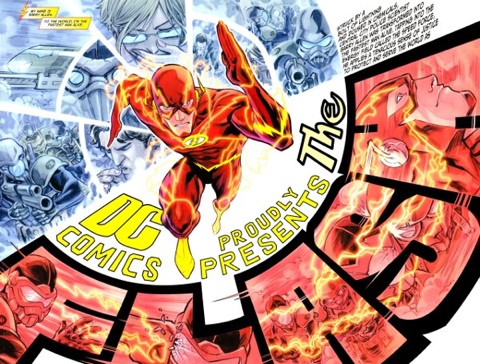 When the dust cleared after the wake of the announcement that DC Comics would be completely rebooting their lineup of characters and starting fresh with all new continuity (The “DC New Universe,” called “DCnU” by most readers,) I was mostly happy with what the company had planned for their flagship characters. One of the few things that I wasn’t quite so pleased with, though, was the decision to remove Wally West from DC Comics continuity altogether, and reinstate Barry Allen as the one-and-only scarlet speedster in the DC Universe.

Wally West is the nephew of Barry Allen, the original Scarlett Speedster (well, kinda). Wally idolized his Uncle Barry, and when he received similar powers (via an accident nearly identical to the one that gave Barry his abilities), he became his uncles sidekick, “Kid Flash.” Eventually, After Uncle Barry sacrificed himself to save the universe, a fully grown Wally decided to shed the “kid” moniker and became the new “Flash.”

Like many comic readers my age, I grew up with Wally West – he has been “The Flash” for as long as I’ve been alive. Barry Allen on the other hand, was just some old guy who died before I was born. I didn’t care about Barry, and didn’t have a lifetime worth of stories tumbling around in my head to connect me with him as I did with Wally.  So when I first found out that Wally was not only knocked out of the crimson and gold, but out of existence all together in favor of  Barry, I was understandably upset.

But then I read the DCnU Flash comics, and within the first few pages writer Brian Buccellato and writer/artist Francis Manapul won me over.

“The Flash” focuses on a younger and single Barry Allen who spends his time outside of the Flash costume working in the crime lab of the Central City Police Department. The first few issues focus on Barry stopping a mysterious group of soldiers who break into a scientific convention, and steal a device that modifies DNA. It eventually turns out that the group of soldiers are all clones of one man, Barry’s old friend from College, Manuel Lago. The origin of where these clones came from didn’t disappoint, and is one of the more original ideas I’ve seen come out of a DCnU comic so far. “Flash” writers Buccellato and Manapul are also doing a great job of re-establishing Barry Allen, and developing his character into someone that readers can (and should) care about.

The writing of “Flash,” makes it worth picking up all on it’s own, however the comic’s art is completely stunning. Francis Manapul is creating some amazing visuals in the pages of this comic that manage to enhance the story without overshadowing it. It’s not easy to make a static, two dimensional image look “fast,” but Manapul pulls it off completely; his “Flash,” is just as streamlined and fluid as the character should look. “Flash’s” colors are handeled by co-write Brian Buccellato, which are just as amazing as Manapul’s linework. He’s been coloring comics for a while, and it shows. The colors really “pop,” and make Francis Manapul’s clean and dynamic lines look even better.

And speaking of art: The Flash’s costume has also been updated as a part of DC comic’s continuity reboot, and while costume updates always have the potential to go horrifically wrong, this one didn’t. The Flash’s iconic look is preserved with subtle updates, such as a now raised lightning bolt symbol and streamlined boots, that make the character look better than ever. Like always, Barry stores his costume in a ring he wears on his left hand. Rather than a full spandex outfit super-compressed to fit into the ring and expands on command, allowing Barry to change into the costume at super-speed, the new costume is stored in the ring in pieces. As he runs, the pieces click into place on Barry’s body, and the seams where the costume fit together glow a brilliant gold whenever he’s moving.

Overall, “The Flash” is a very cohesive feeling book. Brian Buccellato and Francis Manapul collaborate on almost every aspect of the book and the result is a smooth, clear comic. I’ve read a lot of comics that had an amazing writer and an amazing artist, who clearly weren’t on the same page creatively, resulting in a confusing, hard-to-read mess. That’s not the case here, though, and it gives the book an “it-just-works,” quality that has been missing from a lot of comics in recent years.

So, Flash Fans, take it from a die-hard Wally fan: “The Flash,” is well worth picking up. It’s well written, well drawn, and a whole lot of fun to read.