Two teenagers are being chased through the forest, but one is barely making it – his friend is having to hold him up. They reach a river and the weaker boy falls in, trying to swim, while the other is recaptured. A bird comes across the boy’s body floating in the water and pecks out the eyes before it heads over the waterfall. Sgt. Wu calls Nick and Hank to where the body washes ashore. A cursory examination leads them to believe that most of the injuries on the body were post-mortem, due to banging against rocks in the river – but there are two holes in the side of the boy’s neck. Sgt. Wu wonders if anyone believes in vampires… and it’s obvious that Nick’s already wondering if they might exist.

Nick and Hank go to find out what the coroner has discovered, and she tells them that the boy drowned but he was about 7 pints of blood lower than normal, so most likely he was just too weak to swim. The puncture wounds look to be about the size of IV needles. They manage to find his name – Steven – and that his address was actually a PO box, so they go to check it out. While there, they see a girl come in who’s wearing the same shell necklace that the boy had been, so they get the information on the girl who makes them, Gracie, and pay her a visit. When they tell her that Steven is dead, she becomes very upset and her brother, Hanson, comes to her rescue. He calms down once he hears the news, and the two tell the detectives that the last they knew of Steven, he’d gotten a job as some kind of ranch hand and they hadn’t seen him since he’d gone to the local free clinic. Nick and Hank go to the clinic and speak to the office manager as well as the doctor who’d treated Steven when he’d last been there, but there doesn’t seem to be much they can tell them about such a brief visit. 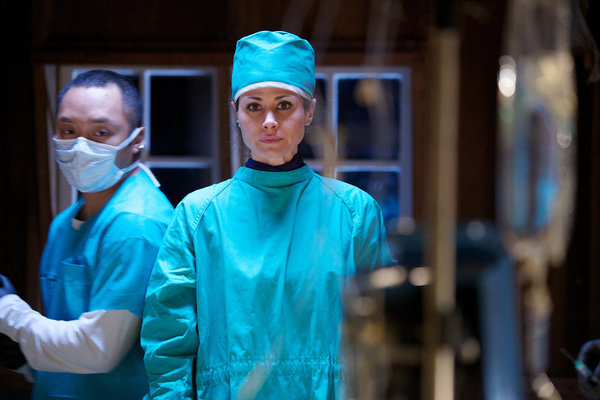 They’re then called to the scene of a car accident and quickly realize why – the man in the van was transporting human organs and blood, but he wasn’t any kind of medical professional. Nick sees him shift into a Grimm creature before he dies. Hank and Nick attempt to figure out who the man was, but his ID is fake and they’ll need a warrant to get any information on the cell phone he’d had in his possession. Nick goes to Aunt Marie’s trailer that evening and finds out that the man was a Geier, a vulture-like creature that harvests human organs and enjoys doing it while the victim is still alive so the most pain is caused. He then goes to see Monroe, who tells him that Geiers are basically the herbalists of the creature world – and the exotic animals they get parts from are humans. Nick asks Monroe to go to the shop he knows of that sells such items, so Monroe goes and makes a purchase of powdered gallbladder. Nick has it sent to the crime lab for analysis. 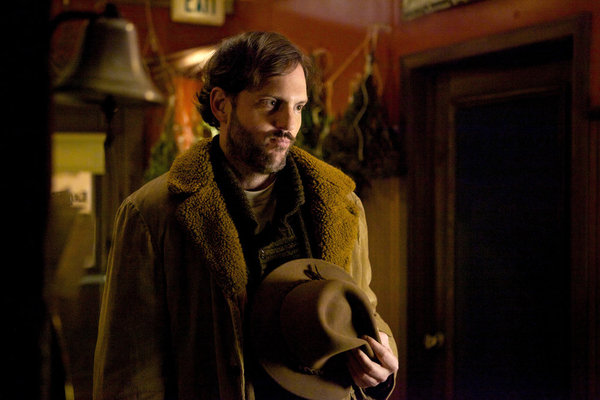 The next day, they get the results from the tests comparing Steven’s DNA to that of the blood and organs found in the Geier’s car. Some of the blood is his – but nothing else matches to him or anything else in the batch. Nick realizes they’re dealing with numerous victims. He then gets the results back from the jar Monroe had bought, and it’s confirmed that it’s dried and ground gallbladder. Nick goes to the shop, threatens the shopkeeper until he tells him the phone number of his contact and confirms that the delivery he’d been expecting the other day never arrived. Nick then destroys the cabinet filled with human parts and powders. 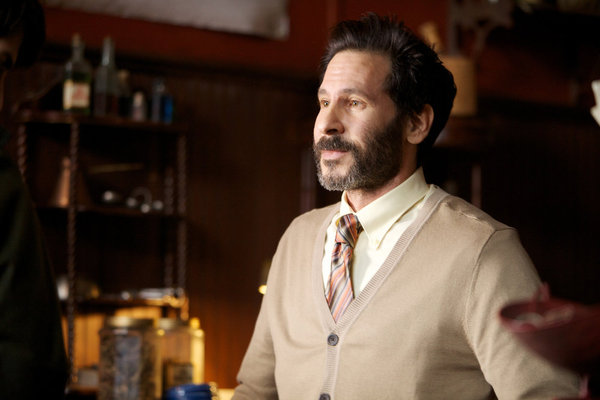 Nick goes home and gives Juliette the necklace he’d bought from Gracie and asks if she’ll go with him as he takes Gracie and Hanson to dinner. They find the kids and after a little coaxing, take them to a restaurant. After they eat, Nick asks if they know of anyone else who’s disappeared like Steven, and Gracie says yes – a friend of theirs named Kevin. The following day, Gracie goes to the free clinic for a bad sore throat and mentions talking to a detective about Steven’s death and Kevin’s disappearance. Dr. Levine sends her off with some antibiotics. Meanwhile, Nick, Hank, Sgt. Wu and Captain Renard are discussing the case – they’ve managed to trace the phone number off the dead Grier’s cell phone, and they head to the address. Someone shoots at them from the window of the trailer and is shot by Renard. When they go inside, they find an entire area room filled with human organs that are being dried. Then the man’s cell phone rings, and when Nick returns the call, he finds it’s the free clinic who was calling the now-dead man. 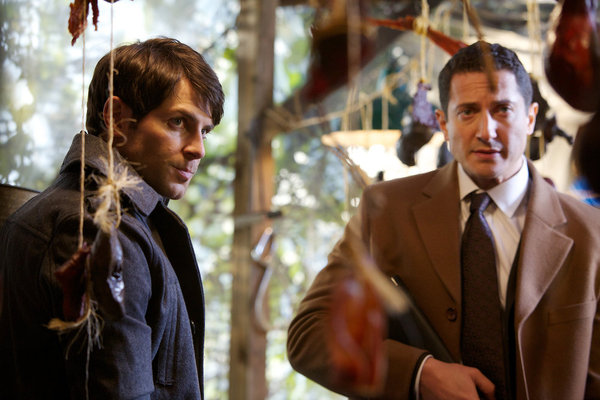 Gracie and Hanson are walking down the street when the clinic office manager stops them and asks to buy a necklace. Just then a white van pulls up and other men rush out and pull the brother and sister into the van and take off. When they’re pulled out of the van somewhere in the woods, Hanson breaks off the shells of his necklace and drops them as they walk, leaving a trail. The police are busy searching the clinic, but it’s quickly obvious that they’re not doing the harvesting there. Nick takes the office assistant – another Geier – into an office alone and threatens her with Grimm punishment, and she gives up the address where the kids are taken. Nick and Hank discover the trail of shells as they arrive and follow them back to the surgery area, where Dr. Levine is about to start on Gracie. They rush in, taking out most of the people, but Dr. Levine manages to escape. Nick chases after her, remembering just in time that Geiers like to sit in trees and leap down on prey. She jumps down and they fight, and he ends up pushing her into the fire pit. Gracie, Hanson, Kevin and others are rescued, and they find a refrigerator full of organs. 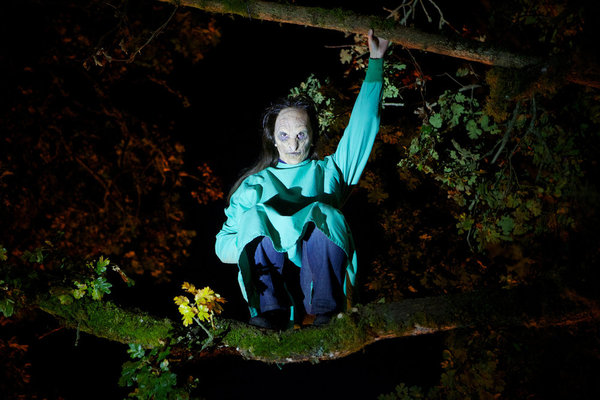 When Captain Renard gets back to his office, he finds a box on his desk. When he opens it, he discovers the Reapers symbol and a human ear. Then his phone rings, and the person on the other line asks if he likes his present and tells him that he needs to control the Grimm or get rid of him because the Ferrat aren’t happy with how he’s handling things. Renard doesn’t appear to be shaken by the conversation, but what could this mean for Nick? 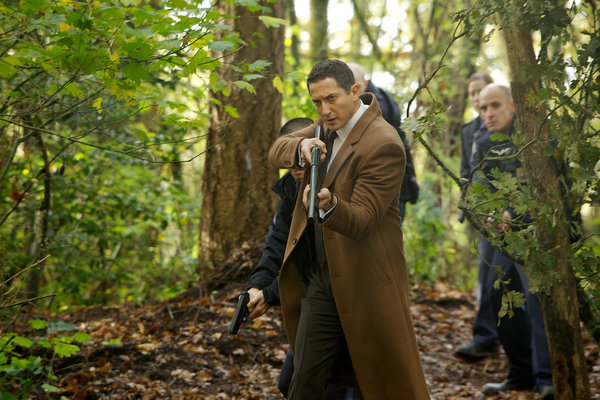 Also in this episode, Nick has a serious conversation with Monroe about whether or not he should tell Juliette that he’s a Grimm. He even asks Monroe if he’ll turn into his Blutbad self and show her. Monroe tries to dissuade him, explaining that of course, some humans have managed to see the various creatures and survive, which is how many legends began, but that most people simply wouldn’t be able to handle it – and they’d go mad. Nick seems to accept this, but he has a moment later in the episode where it’s clear he wants to tell her, but a phone call interrupts him. It seems that this issue may be coming to a head in the near future.

This was another stellar episode with a good balance of fairy tale and crime drama. The details they managed with the Hansel and Gretel tale within the episode were wonderful: organs being eaten=witch eating children; trail of shells=trail of breadcrumbs; Dr. Levine dying in a fire=witch burning in the oven; and of course Hanson and Gracie=Hansel and Gretel. I hope we’ll see more of these direct interpretations in future episodes.