One Fan’s Visit and Walk On Role on Falling Skies 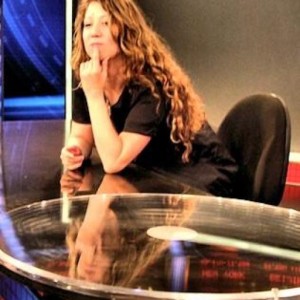 Last year Klout and Turner Entertainment hosted a contest where one fan of Falling Skies would win a walk on role in season two. The contest went for the entirety of the first season and I was lucky enough to be chosen as the winner!

On February 22nd, Turner Entertainment flew me out to Vancouver and put me up in a hotel for three days so that I could film that walk on role. The scene in question will appear in the two part season 2 finale of Falling Skies. It was an amazing trip and I’m pleased to be able to share some of the details with fellow fans of the show!

I was picked up at 12:15 PM on Wednesday and whisked to what they call the “Circus.” This is where the trailers for all the actors are as well as crew members like props, hair and make-up. The powers to be were kind enough to give me my own trailer.

Inside were my costume choices. All soldier’s camouflage but with a few different sizes to choose from to make sure I looked the part of a well dressed, decorated soldier. It was decided that I would be cast as part of the Militia, a group you all will meet next season!

After being fitted into my costume, I was giving a corporal decal and was actually able to pick a name from a few options. I went with Reddy which lead to some jokes on set: “Ready, Reddy?”

After I was dressed the part of a solider, it was time to put the final finishing touches so that I really looked the part. There’s a giant make-up trailer at the “Circus” where all the actors go to get all those fun special effect touches put on, like Antony’s scar or the remnants of Ben’s harness.

This picture was inside the make-up trailer. You can see some of the great work that the department has already done for season 2!

I was lucky enough to get similar treatment.

There may be an alien Apocalypse going on but there’s no excuse to not put your best face forward!

Mpho Koaho came over to say hi as I was being worked on. As you probably already know, he plays Anthony on Falling Skies and was probably the first actor from the show that I ever spoke to on Twitter. He’s a doll and you can tell he truly cares about fans of the show.

I was supposed to bring him Skitter cupcakes but sadly the TSA is suspicious of frosting. I wish I was kidding.

Step two, calming the hair! Poofy hair is not suited for battle and my hair was extra poofy thanks to Vancouver’s rain. Thankfully Falling Skies’ awesome team of hair stylists weren’t afraid to tackle my mane. I ended up with a tight bun, perfect for battle with a Skitter!

Once I was made over into the proper little solider, it was time to head to set. It was a quick drive from the “Circus” to the parking garage where they were filming that day. Previously in the week they were filming in Surrey but had since moved to Downtown Vancouver for the finale.

The long, spooky hallway to set. Skitters could be anywhere!

It wasn’t long after I arrived on set that I met Falling Skies director, Greg Beeman. You can tell he cares a lot about the show and he was kind enough to use me in a few scenes. The biggest of those scenes was alongside Sarah Carter who plays Maggie. The real shock was that I actually was given a line! Not to give too much away but my five seconds of fame involve handing her some guns before the Second Mass goes off to kick some butt!

I spent a lot of time with Mpho and Peter on set which was great as we had chatted a bunch on Twitter throughout season one. It was like meeting long lost friends.

Ryan Robbins and Colin Cunningham were hilarious on set and I wish I had more time to chat with them both. I did get a massive hug from Colin before he ran off to cause more mayhem as Pope. In the time I spoke with Maxim Knight, I was struck by how incredibly mature and dedicated he is for his age. You can tell he will grow into an even more talented actor as he grows up.

Sarah Carter was beyond sweet while we were filming together and would even sing a bit between shots. She has an absolutely lovely voice!

Drew Roy and I also chatted for a bit before production had to drag him back to filming. Mpho joked with my boyfriend Liam, telling him to spread on Twitter that Drew was “trying to steal his woman” and that he had to hold Liam back to keep him for fighting for me. It can’t be said that the cast doesn’t know how to have fun and play around on set!

The highlight of my set visit though was definitely meeting Will Patton. He’s a method actor so I was warned he might seem gruff as he would likely be staying in character as Captain Weaver. However, right after delivering a very dramatic line about “stomping some ass” with his “size eleven boot,” he made a point to offer a warm welcome to the set. He even told the crew that I needed to be in more scenes! I was just in awe and still am!

In the end, I was able to meet everyone but Connor Jessup, Noah Wylie and Moon Bloodgood. They seemed incredibly busy with filming and it was an honor to even watch them act. You could see how much care Noah put into every scene, going back to watch himself on play back and then adjusting his performance accordingly.

The set visit was certainly a whirlwind of action. The cast and crew were filming for 18 hours that day as the season officially ends early next week. I stayed for half of the shoot before I had to leave myself. What an amazing nine hours that was though! Despite the long day, everyone from cast to crew was beyond welcoming. Greg Beeman even jokingly asked if I wanted to come back for season 3. Beeman, if you’re reading this, let’s make that happen! 😉

Every individual who works on the show obviously cares about one another and I think all of us fans can see that in the finished product.

I can also say that season two looks like it will be even more action packed than season one with some brand new characters and darker plot turns. I think fans will absolutely love the direction in which the show is going.

I’ll definitely share more pictures and info as I get them from the cast and crew of Falling Skies. There will also be behind the scenes footage of my trip coming from Turner Entertainment sometime in the near future.  I will definitely say that this trip was an amazing, once in a lifetime experience that I will never forget!