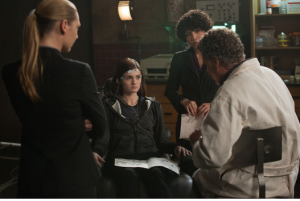 In “Forced Perspective,” Olivia is still reeling from the previous episode’s last minute revelation, when she was visited by an Observer, who told her that her untimely death was inevitable. While trying to figure out who, exactly, the mysterious man was (remember, in this new Timeline our heroes have never come across the Observers) a new case falls into her lap: a teenage girl handed a complete stranger a drawing depicting his death, minutes before his death occurred in exactly the way she predicted in the drawing.When the girl creates another drawing of a man she saw while riding a bus, this one depicting hundreds of people dead rather than just the one man, the Fringe team becomes involved, racing against the clock to stop this horrific event from happening.The team brings the girl back to Walter’s Lab, where he hypnotizes the girl into remembering her horrific vision more clearly, in the hopes that it could help them to figure out when and where the event would take place. 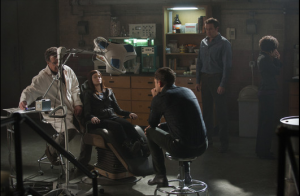 Olivia becomes somewhat obsessive about solving the case, hoping that the per-cognitive girl can give her some insight into the mysterious warning given to her by the observer. At several points in the episode she sneaked in time with the girl alone, eventually asking her if she had any visions relating to her. It was clear that the observers mysterious message to Olivia that she “had to die,” shook her up big time. 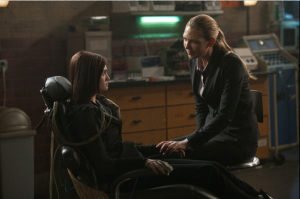 Eventually, the team figures out that the scene depicted in the drawing is that of a courthouse bombing, carried out by the man from the bus. While the team manages to stop the man from committing the crime, the young psychic girl dies by the episode’s end, succumbing to a brain aneurism caused by her abilities. It was a bittersweet moment, as the girl stopped the disaster and finally got peace from the chaos that her abilities created, but had to give her life to get it. 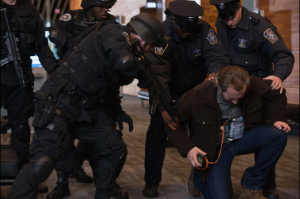 So far Fringe has been doing a very good job of creating episodes this season that are self-contained and easy to follow, and add to the show’s over-arching story line without becoming convoluted. I know a lot of people who started watching the show this season, and are able to enjoy it despite knowing little to nothing of events from past seasons. This episode is a great example of this. The episodes main plot of the team’s race against time to stop a psychic teenagers prophetic drawing of destruction is a strong story all on its own. There are plenty of goodies tucked away for long term fans of the show – such as more great moments between Peter and Walter. The two are starting to become close, and the dynamic between them is starting to edge closer to how the two were pre-Peter- deletion. And more than that, the rest of the fringe team is beginning to embrace Peter, letting him in on their cases. Slowly, he’s (once again) becoming a member of the team. 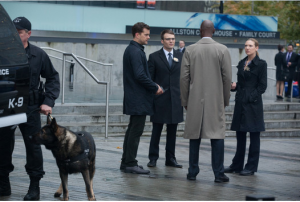 Overall “Forced Perspective” was a strong episode, and a good example of why season 4 is a great jumping on point for curious fans who have not seen past seasons of the show.

Underneath the surface of this episode I was getting strong vibes that some big things are coming for Olivia and the gang. It was nothing I can put my finger in specifically, but the mention of the show definitely seems to be building. So for all you Fringe fans out there who have friends and family curious about the show, tell them to tune in – this season is ripe for new viewers, and things are about to get (even more) interesting for our heroes!

Fringe airs Fridays on Fox at 9/8c and is available to watch online at fox.com