If you can’t get enough of “The Hunger Games” then this is good news for you.  Business Wire is reporting that Lionsgate and game developer Funtactix have announced the pending release of “The Hunger Games Adventures,” a Facebook-based social media adventure game which will launch simultaneously with the film on Friday, March 23, 2012.

An exciting component for fans is the fact that the game will feature the first official map of Panem, the world within which the story and game take place.  Upon first playing the game, players will be limited to District 12, but it is promised other districts will be unlocked as time passes.  It is also said the game will adapt as the second and third installments in the movie franchise are released.

Although the game won’t be released until the movie premieres, potential players can sign up by submitting their email address on the game’s website.  Because it’s played in a browser the developers say it should play nearly as well on almost any kind of computer, regardless of speed and power.

Below are two screenshots of the game in action.  You’ll notice it looks similar in layout to other Facebook games, which is to be expected given the platform. 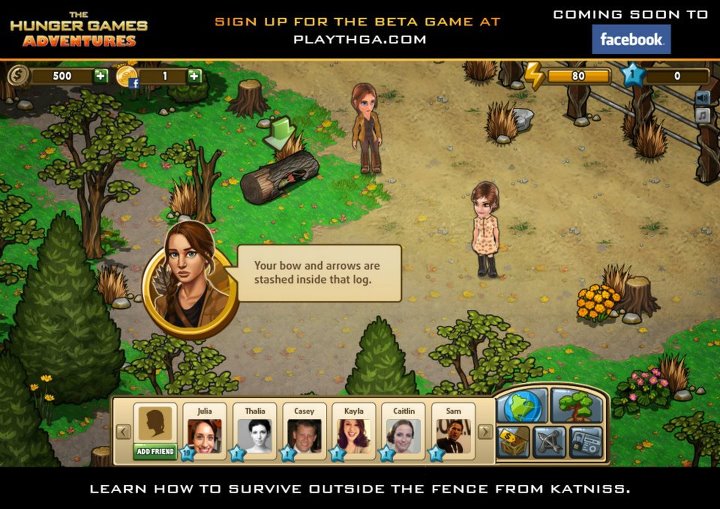 From the BusinessWire press release:

NEW YORK–(BUSINESS WIRE)–Funtactix, a worldwide developer and publisher of social games based on the world’s premiere entertainment brands, in partnership with Lionsgate (NYSE: LGF), a leading global entertainment company, today announced that THE HUNGER GAMES ADVENTURES will launch day and date with the highly anticipated film adaptation of Suzanne Collins’ runaway bestselling novel on March 23rd, 2012. The perfect companion for fans of the franchise, THE HUNGER GAMES ADVENTURES enhances the movie experience through an unprecedented journey into the fantastical world that has enthralled millions since the books first hit shelves.

THE HUNGER GAMES ADVENTURES is an adventure-based social game where fans can explore the world of Panem – the setting for The Hunger Games trilogy. Players will explore Panem and complete missions that will take them to each of the Districts and the Capitol where they will interact with the familiar characters from the book. With each mission they complete, they will advance their own storyline within the world. As the official game of the series, THE HUNGER GAMES ADVENTURES will be the first place fans can see the official map of Panem, and how the districts are laid out. Details for the Map of Panem will be rolled out in the game with a steady stream of chapter expansions as the game, and the world, reveals itself over time.

“As a company that wants to align itself with the most beloved entertainment properties and passionate fans in the world, joining forces with Lionsgate on The Hunger Games was a very easy decision,” said Sam Glassenberg, CEO of Funtactix. “Suzanne Collins’ amazing novel delivers an unbelievably detailed world that completely immerses the reader. Fans want to enter this world, interact with the characters and truly become a part of it. That is the magic that THE HUNGER GAMES ADVENTURES will provide to the millions of people who love the book series and watch the movie.”