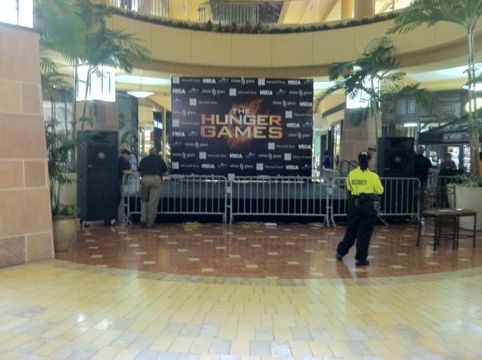 On Wednesday, March 7th the national Hunger Games Mall Tour, in which cast and crew members from the upcoming film visit mals from around the country to meet and greet fans, answer questions, and sign autographs, came to Scottsdale Fashion Square in Phoenix, Arizona, and threeifbyspace.net was there to check out the scene. 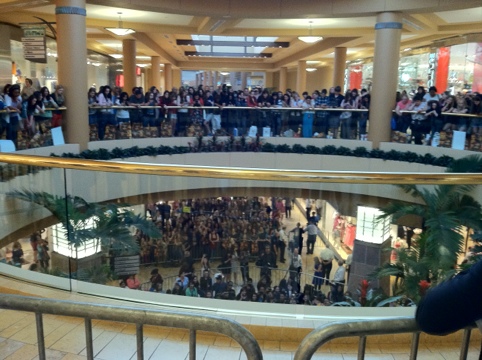 The atmosphere at Fashion Square was an intense one. The second I walked inside I was greeted by the screams of the hundreds fans, who were packed in tight, waiting to catch a glimpse at the guests of honor. When the MC announced loudly that the cast members had arrived and were ready to appear, a wave of joyful cries rippled through the crowd. When the crescendo of excitement reached a momentary lul the first cast member was annouced: Liam Hemsworth, who potrays Gale Hawthorne, friend and hunting partner of Katniss Everdeen, The Hunger Game’s protagonist (portrayed by Jennifer Lawrence, who wasn’t in attendance at the event). As Hemsworth stepped onto the stage neck’s strained, flash bulbs (and cellphone cameras) flashed, and teenage girls squealed. Leven Rambin (Glimmer), Dayo Okeniyi (Thresh), and Jack Quaid (Marvel) were also at the event, and the screams were just as excited when each one of them were introduced to the crowd. 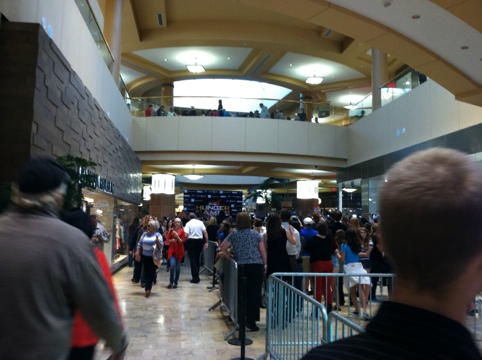 After a thirty minute question and answer session, the cast stuck around to sign shirts, posters, books, and a few body parts for another half hour until the event ended. One thing was perfectly clear when the dust had cleared at Scottsdale Fashion Square: People are excited for this movie.  As I walked around the rest of the mall fter the cast left and the crowd thinned, on the lips of more people than I could count I heard the words “Hunger Games.” With similar events in malls all across the country, leading right up until the film’s release, the writing on the wall for a huge opening weekend box office tally seems very likely to be in The Hunger Games future.

The crowd at Scottsdale Fasion Square, waiting excitedly for The Hunger Games cast members to arrive:

The crowd, as Liam Hemsworth stepped onto the stage:

The Hunger Games will be released nation wide on Friday, March 23rd.