Nick is starting to enter his own Wesen encounters in his Aunt Marie’s book, adding drawings and information for future Grimms. Then, there’s a scene of man hiding from another man in Washington, D.C., and catching up to him in St. Louis, where the man being hunted kills the hunter – who happens to have an odd tattoo that looks like two interlocking diamonds on the inside of one hand. The man takes off and the next morning, the body is found by another man – who also finds the first man’s bus information. When he gets off the bus in Portland, the new hunter is waiting for him and begins shooting at him. He ends up shooting him, but the man escapes, leaving behind a pool of blood and his rucksack, which the hunter takes. Captain Renard enters his apartment and is immediately help up by the hunter, who identifies himself as Edgar Waltz, a member of the Verrat who is hunting Ian Harmon, a leader of the resistance. Renard tells Waltz that the Verrat’s problems are not his problems, and Waltz leaves, warning Renard with the Latin “If you seek peace, prepare for war”. 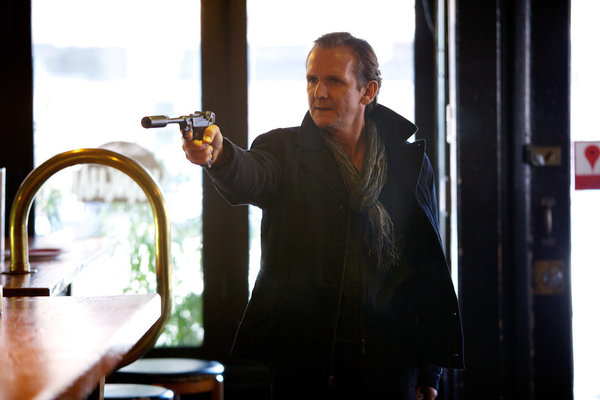 Hank is talking to Juliette the next morning while waiting for Nick, and she tells him that she’s sorry things didn’t work out with Adalind – but she wasn’t good enough for him anyway. Hank seems a bit bewildered by the experience and says he almost thinks Adalind roofied him, because the experience was so bizarre. Nick comes downstairs and they head to the bus station to check out the shooting. Rosalee enters the shop and someone grabs her from behind, but she immediately fights back and sees that she knows the man – it’s Ian Harmon, and he’s bleeding all over her floor. He says he’s looking for her brother who has some identification papers for him, not knowing that Freddy was recently killed. When he learns this, he wants to leave, but he’s too weak from loss of blood so Rosalee takes him into the back of the shop and calls Monroe for help. At the scene of the shooting, the bus driver is able to identify the man who was on his bus and was likely the one shot, but the name he put on the bus ticket was a fake one. Monroe arrives at the shop and Rosalee explains that she can take out the bullet – she just wants Monroe’s support. Monroe immediately knows who Ian is and realizes that it’s the Verrat hunting the resistance leader – and Verrat are very bad news. 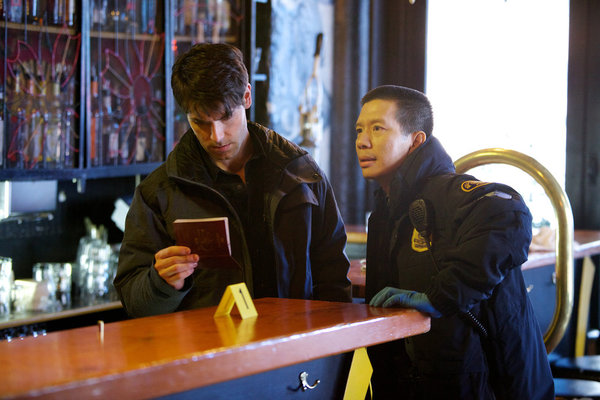 Meanwhile, Waltz goes to a Wesen bar and asks the bartender where he’d get forged documents. The man gives him the name of a camera shop and then notices that Waltz has left Ian’s passport (taken from his rucksack) on the bar – and then Waltz shoots the bartender. Back at the spice shop, Rosalee gets the bullet out of Ian and reveals to Monroe that she and Ian were an item years ago. Monroe suggests that they call Nick, that maybe he can help. Once Ian is more awake, Monroe and Rosalee try to sell him on meeting Nick – but Ian’s very apprehensive because Nick is a Grimm and a cop.  Finally, he agrees and Monroe calls Nick. Nick and Hank are at the bar, investigating the bartender’s shooting. They immediately notice that the bullets are the same kind as those they found near the bus station. There’s a witness to the shooting – Waltz – and he claims that the shooter looked like Ian when he was shown the passport found in the bar.  Waltz calls Renard and admits that he’d killed the bartender because Renard refused to help him. He also wants to have Nick help him to find Ian, but Renard refuses. Waltz then goes to the camera shop and threatens the Wesen’s family if he doesn’t help him if Ian or someone else comes in wanting documents. 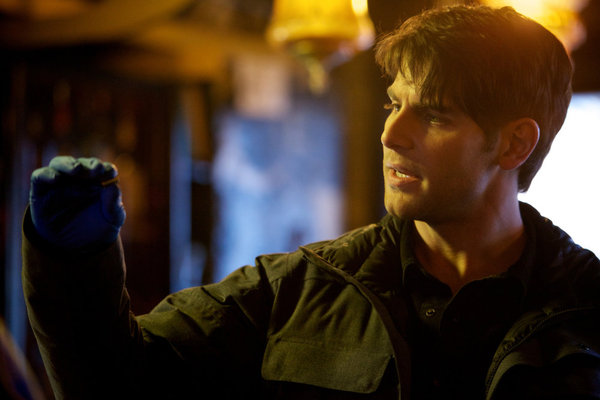 Nick arrives at the spice shop and immediately pulls out his gun once he recognizes Ian. When both Monroe and Rosalee vouch for Ian being with them at the shop when the bartender was killed, Nick decides to listen to Ian’s story. Nick learns about the Verrat and the fact that Grimms used to work for the royal families – something Nick clearly knows nothing about and doesn’t want to know. He only wants to find the man who actually killed someone – and he now knows that man is Edgar Waltz. Rosalee then heads out to the camera shop to get the Wesen there to make a fake passport for Ian, not knowing that Waltz is expecting this. Nick goes to Aunt Marie’s trailer and watches a film that says “Verrat, Madrid, 1936” on it. A Grimm relates how the Verrat killed innocent Wesen with no trial or any proof of wrongdoing, and Nick is very shocked by the words and the shooting he sees. Nick’s phone rings and it’s Waltz, wanting to meet under a temporary truce. Nick goes to meet him and Waltz tells him that if he doesn’t find Ian and bring him to Waltz within 24 hours, he’ll start killing innocent people all over Portland – and Nick knows he’s telling the truth. 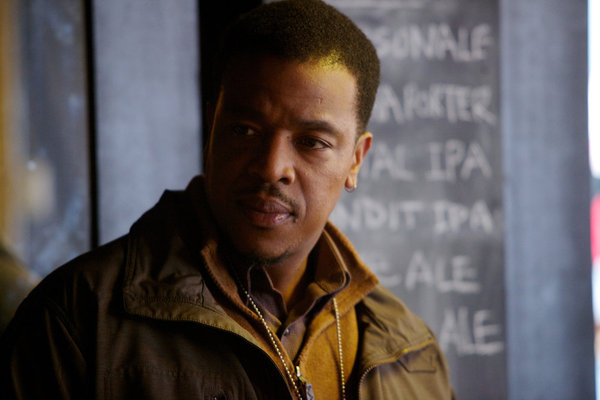 Nick goes to Renard and Hank and tells them what happened with Waltz. Wu comes in to tell them that the phone’s been traced to a camera shop downtown. They head out, but they’re too late – Rosalee has already left, and Waltz has already shot the shop owner and followed her back to her shop. Rosalee opens the package at the shop just as a man enters and asks for help. She tells him to wait a moment and then pulls out a warning note from the camera shop owner. She reaches for her phone just as Waltz pulls a gun on her – but he tells her to use it to call and get Ian there. If he’s not there in 15 minutes, he’ll kill her. Rosalee calls Monroe and tells him and Ian, and they head out. Monroe calls Nick as he drives, and Nick hurries over to the spice shop. 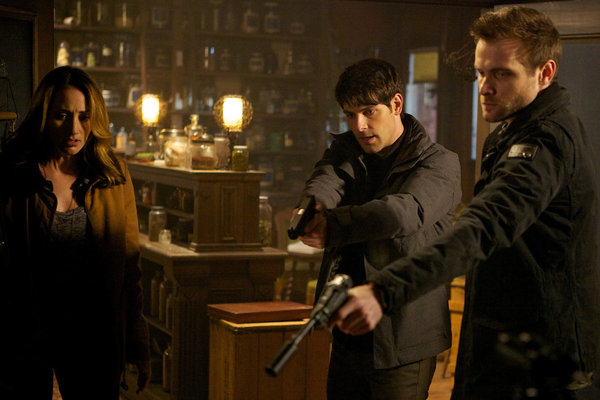 When Nick arrives at the spice shop, he tells Monroe and Ian his plan and then goes in. Nick tells Waltz he has Ian – and then Monroe comes in, pretending not to know Nick and says he’s the one who has Ian. This gives Rosalee the chance to throw something from her shelves into Waltz’s face, and then Nick and Monroe disarm him. Then Ian shoots Waltz, and Nick seems resigned to take him in. He handcuffs Ian despite Rosalee’s pleas, but as he’s leaving, he tells Monroe to get rid of Waltz’s body. Nick then drives Ian to the bus station, gives him the passport and cash from Rosalee, and tells him not to come back to Portland. Waltz’s body is found in a random place, and Nick, Hank and Renard are discussing who might have done it. They think it could be Ian, but they haven’t found him – and Nick knows they won’t. 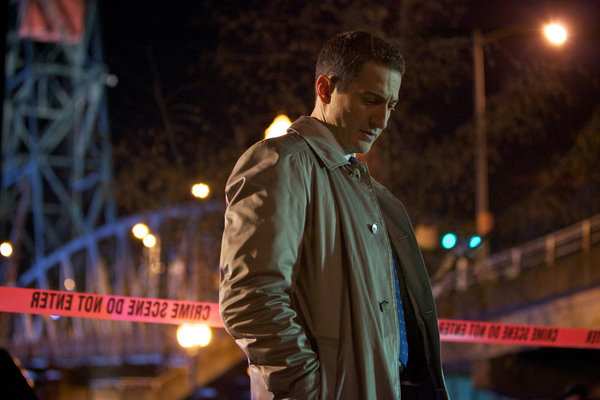 This was an action-packed episode for sure! It was also great to see a wide variety of Wesen in this episode – Waltz and the other Verrat were hyenas or possibly bears; the bartender was a lizard creature; the camera shop owner was a rodent of some kind; and Ian was another Fuchsbau just like Rosalee and Freddy. Speaking of whom, we now have the answer to Freddy’s multiple passports – he was a member of the resistance as well as helping others in it. Rosalee hasn’t been involved, although her parents and grandparents were as well as Freddy, and I can’t help but wonder if she’ll also take up her brother’s other work now. Seeing Rosalee called Monroe’s “girlfriend” and having Ian try to get Monroe to talk about it was interesting, especially in addition to Rosalee calling Monroe for support – how much longer until they admit to one another that they both want more? Come on already! It was good to get the closure on the Hank/Adalind relationship, even if it seems poor Hank is still a little confused about it all.

Probably the best thing about this episode was Nick finally running into a police and Grimm problem where he has to make a clear choice: do the right thing as a Grimm, or do the right thing as a police detective? Of course, he’s breaking new ground as a Grimm in being friends with quite a few of them, but in some respects, his previous encounters have had his Grimm and detective ethics aligned. He chooses not to arrest Ian and actually helps him to escape, and then covers up the true crime scene and all his knowledge of Waltz’s death. He’s crossed a line here – the question is, will this lead to him crossing it again, and how?