Grimm Review – The Thing with Feathers

Nick decides to take Juliette away for a weekend in the country – and plans to finally propose. They leave behind Hank, who’s becoming more obsessed with Adalind every day, and Wu, who’s still eating odd things like paperclips – and Nick is unaware of both of these things as of now. Next, we see a young woman on a cell phone, hiding by the side of the road where Nick and Juliette are heading. She’s begging someone to come and get her, but his car has broken down. She asks him to come tomorrow because she doesn’t have much time left, then runs back to her house. Just as she’s about to go in, her husband Tim stops her, turns into a cat-like Wesen creature and says it’s time to eat. Robin looks frightened and turns into a golden bird Wesen, and he pulls her inside. He makes a horrible-looking concoction in the blender that includes worms and other disgusting-looking items. Nick and Juliette are slightly lost and they stop at the couple’s home to ask for directions. As it turns out, they’re almost there – but while Tim is giving Nick directions, a loud noise comes from inside the house and Nick sees him turn into a Wesen momentarily. As they’re driving away, Juliette sees Robin at the window and gets a bad feeling about the situation. They head to the cabin that Nick has rented for the weekend, which is gorgeous – Juliette is clearly surprised and pleased. 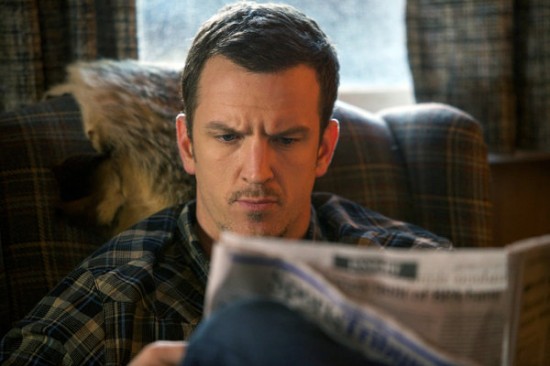 Hank sits in his car outside Adalind’s apartment, watching her. He calls her cell phone and sees her ignore the call. Then, another man arrives and she greets him with a kiss, then pulls him into the bedroom – and he can’t see into those windows. Meanwhile, Nick and Juliette are just settling down for a nice evening when Juliette notices Tim and Robin fighting outside when she looks out the window. She tells Nick, who calls the local sheriff to report a domestic disturbance. Inside the house, Tim has strapped Robin to a chair and put a device on her head and mouth to force it open. He then puts the disgusting mixture into a machine and inserts a tube into Robin’s mouth, force-feeding her the mixture. Nick and Juliette watch the sheriff arrive and go inside, but he soon leaves without taking Tim in. Juliette is upset by this, but Nick explains that there’s really nothing more they can do. Back in Portland, Hank is waiting outside as the man leaves Adalind’s apartment. He tells him not to ever come back, even threatening him with his gun. The man walks off and then goes to sit in Captain Renard’s car, explaining what had happened with Hank – and thanking Renard for the chance to serve him. 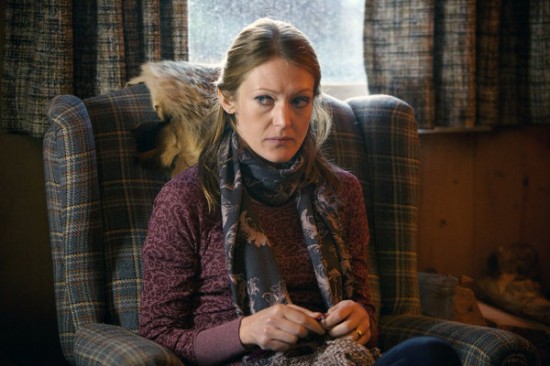 Nick then calls Monroe, who complains that it’s the middle of the night. Nick apologizes but says that as he can’t get to Aunt Marie’s trailer at the moment, he really needs his help. He describes the kind of Wesen Tim is, and Monroe tells him he sounds like a Klaustreich – they’re jerks, women love them, and the relationships never end well. Monroe’s high school girlfriend left him for a Klaustreich, so he’s a little biased. The next morning, Nick and Juliette go into town to do some shopping, and they happen to run into Robin and Tim at the grocery store. Juliette manages to slip Nick’s card to Robin, telling her to call if she needs help. Nick also sees Robin’s Wesen form, and now he’s sure there’s something odd going on. Robin is also trying to plan her escape again with Gary, a clerk at the store. At Rosalie’s spice shop in Portland, Monroe is helping to organize the shop when Rosalie discovers an envelope on one of the shelves. It contains 3 different passports – each for different countries with different names, but all have her brother’s photo. She has no idea why he would need them. Nick calls then and tells Monroe about the type of Wesen Robin is, he says she sounds like a Seltenvogel – but they were thought to be extinct. Rosalie hears what’s being discussed and says her brother has a book that could help. She pulls out the book and explains that Seltenvogel produce an egg-like stone called an Unbezahlbar once in their lives – it’s made mostly of gold and is supposed to have special powers. Monroe warns Nick that once the Klaustreich has the stone, he’ll probably kill Robin. 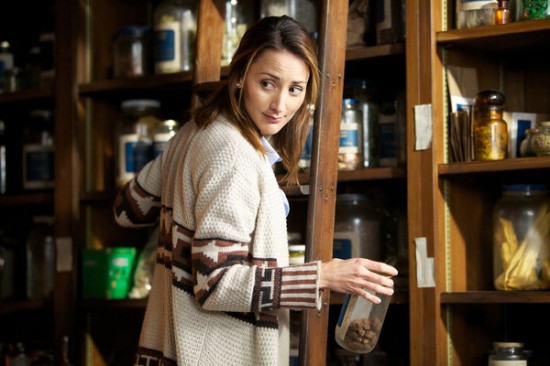 Renard pays a special visit to Adalind, and they look very cosy together. He tells her to answer the next time Hank calls, and she does, making dinner plans with him for the next night. 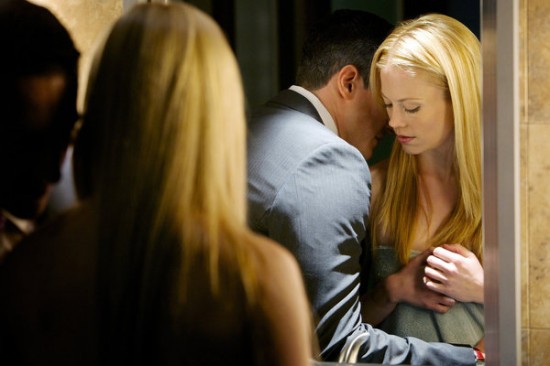 Tim gets a call that a friend’s truck has broken down and tells Robin he doesn’t know when he’ll be back. She waits until he’s gone and then once again makes a run for it. Juliette sees this and sends Nick after her. Unfortunately, Tim has discovered the plan and kills Gary as he’s waiting for Robin, then props his dead body up in the car. When Robin gets in, Gary’s body falls into her lap. She quickly jumps out, but Tim is right there and drags her into his truck to take her back home. Nick arrives just as they’re driving away, but he finds Gary’s body in the car and calls the sheriff. Nick is running back to the house when Juliette calls, saying she saw Tim come back with Robin. Tim wastes no time in strapping Robin into the machine to force feed her again, but Nick bursts in and tells Tim to turn off the machine. Instead, Tim turns it up and begins to fight Nick. Nick finally manages to shove Tim out a window and turns the machine off and frees Robin, bringing her up to the cabin and Juliette. They see the sheriff arrive and think this is a good thing until Robin explains that the sheriff is Tim’s cousin and he knows all about the situation. Robin heads out the other side of the cabin, and Juliette tells Nick to follow her while pulling out her new gun. 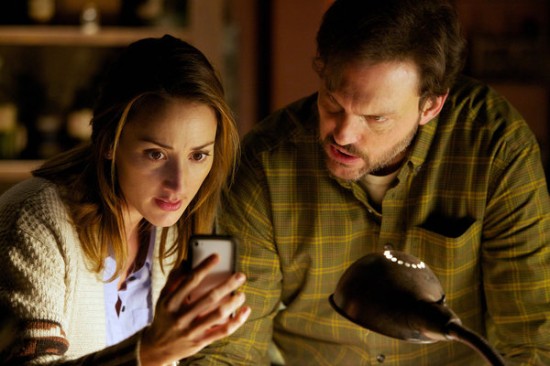 Nick finds Robin collapsed on the ground in the forest, clearly having trouble breathing because the egg has gotten so large. She tells him he has to take it out. Having no idea what to do, he calls Rosalie. She and Monroe consult the book and explain to Nick how to carefully cut Robin’s neck and remove the stone. Once he does, she’s able to breathe again. He tries to give her the stone, but she doesn’t want it. However, Tim and the sheriff do, and they show up just then to try and take it. Nick begins to juggle the stone, knowing that if it breaks it’ll be worthless. The two men are paralyzed for a minute, but then Nick throws it at the sheriff and he goes down just as Juliette arrives with her gun. Tim catches the stone and takes off, but Nick grabs him and the stone hits a tree branch, turning into nothing but glitter that quickly dissapates. 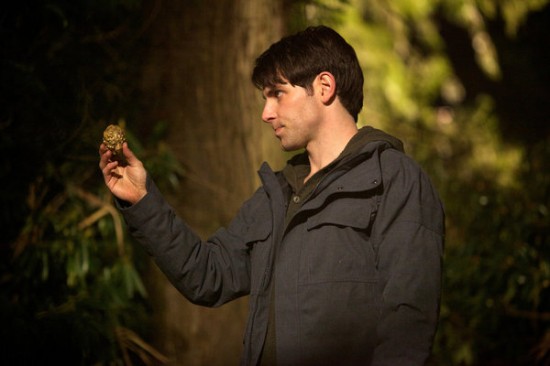 Nick and Juliette arrive home, and Nick finally gets the chance to pop the question. He’s completely unprepared when she says no, because although she loves him and wants to marry him, she can’t while he’s closed himself off from her so much and is hiding things from her. She thinks it’s due to his losing Aunt Marie, which is of course related more than she knows. Nick is very upset and leaves her gazing at the ring she won’t wear.

Across town, Hank and Adalind are having such a great time at dinner that they close the restaurant down.

This was a difficult episode to watch due to the domestic abuse shown, but it’s clear that the writers are trying to make the show more relevant while still sticking to the overall fairytale creatures theme, so kudos to them. It was also hard to see Nick be rejected by Juliette and, once again, not take the chance to tell her the truth. Once he has more time to think about it, will this finally be what pushes him to reveal everything? Once Nick gets back to work and finds out about Hank and Adalind, how will he react? Will anyone ever discover the potion that’s controlling his emotions – Rosalie, perhaps? The Monroe/Rosalie relationship continues to be a fun one, and now that they’ve got their own little mystery to solve in the form of her brother’s multiple identities, that will likely bring them even closer. Will we ever see who – or what – Renard really is and what he really wants with Nick? And will anyone ever help poor Sgt. Wu? The questions just keep coming – thankfully there are about 6 more episodes until the end of the season, so perhaps we’ll get a few answers soon.