BOOK REVIEW:TELEPATH – Guardians Of The Word 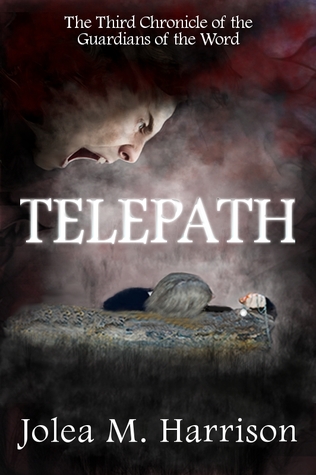 I will now temporarily wrap up my coverage of The Guardians Of The Word with this review of TELEPATH, Book 3 of Jolea M Harrison’s wonderful Science Fiction/Fantasy series.

Picking up immediately after the conclusion of MYTH this book finds our heroes Dynan and Dain Telaerin on the run, evading pursuit by those once sworn to protect them. They are hunted and hated and must quickly adapt to a situation and a lifestyle neither of them could ever have imagined.

The quality of the writing, which was already extraordinary in the first two books, is increased further here. The characters, the worlds they visit and the constant life and death struggle they find themselves in is richly presented in a way that will enthral you and keep you turning the pages.

From glorious and luxurious cities to barren and bleak desert worlds the reader gets to experience it all, you can easily form a vision of the various worlds in your head and just like with the previous books you can feel yourself in the middle of the action, the descriptions of everything from the smallest character and the smallest weapon up to the largest character and the planet destroying battleship are intense and vivid and will leave you in awe.
In the background throughout the story is the usurper Kamien who has seized control in his brother’s absence and whose own motives are still shrouded in layers of mystery

As the twins and their small band of allies move around the galaxy attempting to survive against the odds and trying to think of a way to fight back against their enemies they must also deal with the feelings that have resulted from the attacks on the palace and the deaths of so many people..

With their understanding of their own telepathic powers growing and after enduring several assassination attempts the brothers slowly begin to form a plan to retake their throne and clear their names – assembling on a secret base they take command of a rebel force made up of soldiers and civilians from Cobalt and the few systems that have secretly sworn allegiance to them but despite their resolve and a handful of political victories both at home and on other planets both Dynan and Dain are taunted by an evil and powerful telepath whose reasons for his actions are not always clear – Yes he is evil but why and what is his endgame?

I know I hyped it up at the beginning but it deserves mentioning again, the quality of the writing makes reading this more than just usual reading, thanks to the authors mastery of words you not only read about the characters emotions but you feel them too so it almost as if you are going through this with them. A good book can lead you to have sporadic bursts of involvement like that but a truly great book like this can and does pull you in from the beginning and stays with you long after the end of the book. As the characters struggle with things so do you as the reader and no matter how dark things get (AND THEY DO GET DARK IN THIS BOOK) you cannot help but get sucked in to the action and adventure despite everything else that is happening.

Finally the ending sets up nicely what is guaranteed to be an epic adventure. If you have done yourselves a favour and read the series this far I’m sure you’ll agree and I cannot wait for the journey to continue.

Again the story has elements of both SciFi and Fantasy that should easily satisfy fans of both genres.

TELEPATH is available from Amazon on Kindle here:

And in Paperback here: