Nick and Monroe are having coffee in a local shop and discussing Nick’s concerns about Hank, who recently saw two Wesen and doesn’t seem like himself. Little do they know that they’re being photographed by a private investigator who was hired by Akira Kimura, the last surviving suspect in Nick’s parents’ murder and who is also after the Coins of Zakynthos. The PI tracked Soledad Marquesa and found that Captain Renard, Hank, Nick and Monroe were all involved in the case surrounding Marquesa and the coins, and he believes one of them must have them. Kimura morphs into a Schakal and kills him, taking all the information he needs with him. Moments later, a woman in a black hood breaks into the room and looks through what’s left, then leaves. 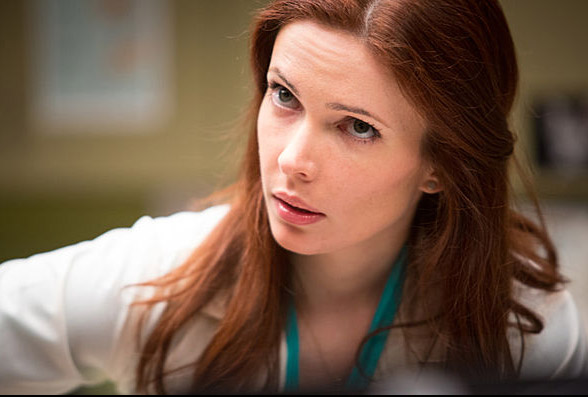 Adalind mixes up a potion and puts it in milk, then gives it to a cat to drink. She then shows up at Juliette’s office saying the  cat – appropriately named Magique, or enchanting in French – is sick, and that she hopes Juliette won’t hold things not working out with Hank against her. Juliette says of course not and begins to examine Magique. When Juliette picks the cat up, its eyes turn black and tongue turns yellow and it gives her a major scratch on one hand. Adalind apologizes, but Juliette waves it off as all part of the job and takes the cat for tests and to stay overnight. 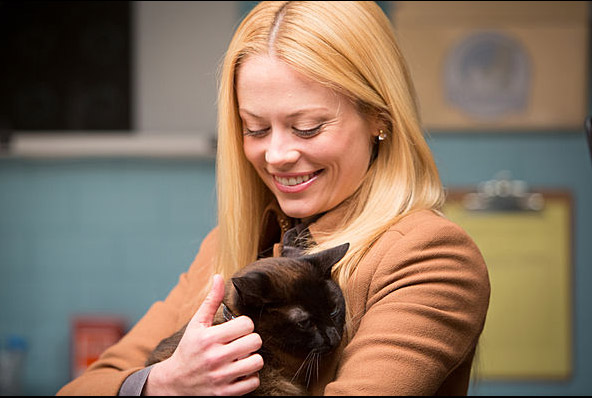 Nick and Hank are called by Sgt. Wu to the murder scene of the PI. They don’t find much in the hotel room but the key to his rental car, where they find his all of his cameras. When they look at the saved digital photos, Nick is surprised to see himself, Hank, Captain Renard… and Monroe. He immediately calls Renard, but it’s too late – Kimura is already there and has killed Renard’s housekeeper, trashed his apartment and now has beaten and tied Renard up. His plan is to torture Renard for the coins, but when Renard says that Farley Kolt took them, Kimura replies that he already knows Kolt doesn’t have them. Things are about to get worse when Sgt. Wu and another officer knock on Renard’s door since he never answered Nick’s call. Wu heads down to get the key from the super and leaves the officer at the door. Wu meets Nick and Hank as they arrive, and Nick notices a woman in a black hood walk by. When they get back upstairs, they find the officer down and Renard unconscious. When he comes to, he tells them that the man wanted the coins and claimed he’d already gone after Kolt in LA. When Renard describes the man – Asian, 40s, with a tattoo on his face – Nick and Hank already know it’s Kimura. They show Renard Kimura’s photo at the station and he confirms it – and then tells them to tear the town apart to get him. 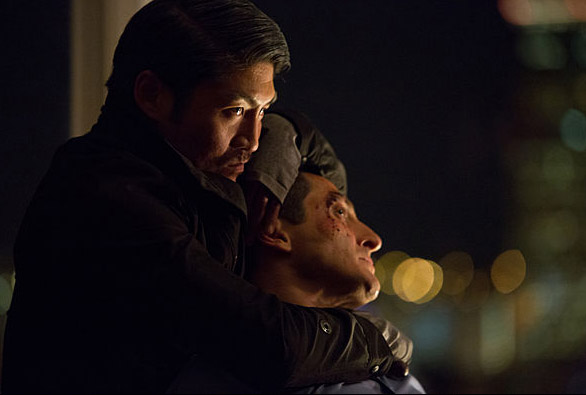 Nick stops by Monroe’s house to warn him about Kimura. He also explains that he wants to take him alive because he’s the last person he knows of that has a connection to his parents’ deaths. With Monroe’s help, he finds a way to load a crossbow bolt with a specific toxin that will subdue but not kill a Wesen in one of Aunt Marie’s books. They then get the bolts ready. Nick heads home to find Juliette waiting, and he quickly notices the bandage on her hand. She reluctantly admits that it was Adalind’s cat who scratched her. Nick rips the bandage off to look at the scratches and insists that Juliette see a doctor, but she protests that no one needs a doctor for a cat scratch. Nick tells her that Adalind is a witch, but Juliette just thinks he’s being rude. So Nick asks her if she really wants to know the truth, and Juliette insists that’s what she’s wanted for a long time. So he takes her to Aunt Marie’s trailer and shows her the books, the illustrations, and the weapons. Juliette walks out and Nick follows, but she tells him that he needs to get help. Nick asks her to trust him just one more time before giving up on him, and she agrees. He takes her to Monroe’s and asks him to show her his Blutbad self. Monroe is understandably startled but when Nick explains what happened with Adalind and the cat, he agrees. Just as Monroe changes, Juliette faints, seeing nothing. They take her to the hospital, but the doctors have no idea what’s going on, saying that if she might be contagious, she’ll have to be put in quarantine. 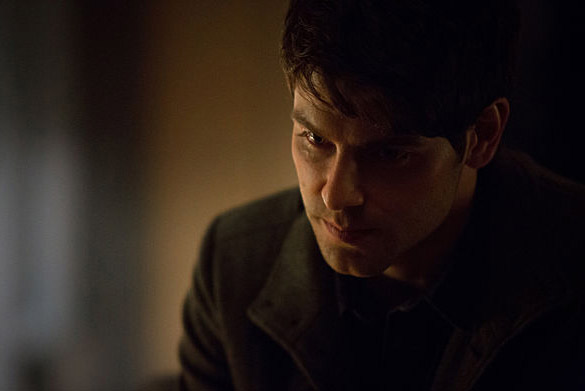 Meanwhile, the mysterious woman in black breaks into Kimura’s hotel room. She goes through his things and takes a photo of Nick, and is leaving the room just as Sgt. Wu shows up. He and the officer with him try to subdue her, but she manages to get away by using some amazing martial arts moves. Nick and Monroe head to Juliette’s animal hospital to get the cat that scratched Juliette. It’s hissing and nasty, so they carefully take it to Rosalee at the shop. She plans to make up something to put the cat asleep so she can get traces off its claws. Nick heads to Adalind’s, but finds it completely empty except for an almost-drained bowl of milk. Juliette wakes briefly in the hospital and her eyes are black like the cat’s were in her office. 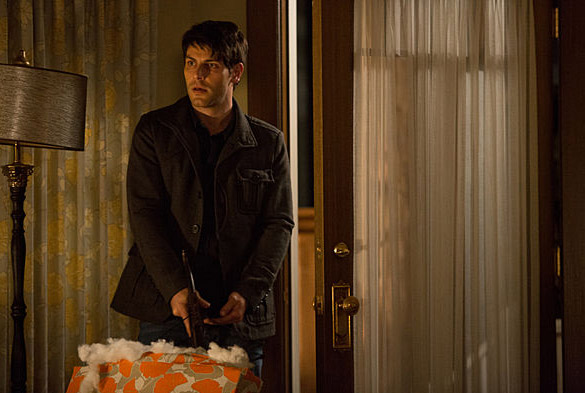 Hank arrives home to find his house completely trashed, despite the officer sitting out front. He searches the house carefully, but he misses that the woman in black was in the house until he hears a slight creak – and then he starts shooting without even looking. When he stops, he’s done nothing but put bullet holes in the closet wall and freaked out the officer that came running at the sound of shots. He then calls Nick to tell him that Kimura’s been to his house, so Nick’s is next. Hank then sits alone in the dark with a large gun, taking no more chances. Nick heads home with the crossbow and when he sees Kimura come down the stairs, he fires – and misses. They begin fighting and Nick is fueled on by the fact that the man helped to kill his parents. He asks him a few times why he did it, but Kimura doesn’t respond. Suddenly, the woman in black shows up and Nick starts fighting her, too. She manages to toss Nick aside and kill Kimura, and then she stands up and looks at Nick, who has his gun on her, and says, “Nick. Nicky. It’s me,” to which Nick replies, “Mom?!” 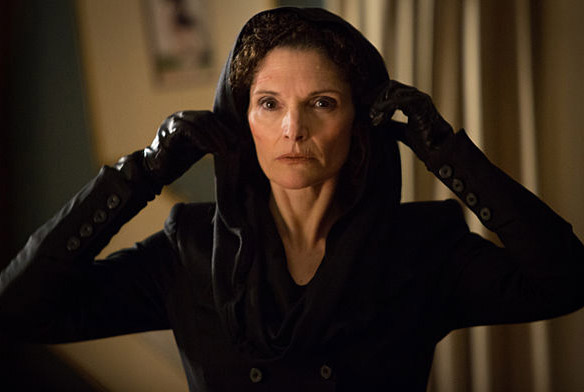 In typical cliffhanger season finale fashion, we got a few answers and a lot more questions. That said, I did know from the first look at her that the woman in black was Nick’s mother – excellent choice in casting Mary Elizabeth Mastrantonio, in my opinion, plus she (or her stunt double) really does move like a Grimm. Kimura’s dead, so hopefully this means no one else will come looking for the coins and that storyline is over.

It was nice to see Claire Coffee back as Adalind, who seems to have gotten over her, ah, issues, and can clearly still make potions… but is she actually a Hexenbiest again, or is she just using the magical knowledge she still possesses? And what has she done to Juliette? Signs point to turning her into… a cat? A cat Wesen? From everything we’ve learned this season, Wesen seem to be born rather than made, but… another question for next season, unfortunately – unless Rosalee manages to come to the rescue with Monroe’s help. Kudos to bringing Bree Turner, who plays Rosalee, on for next season, too – she and Silas Weir Mitchell, who plays Monroe – have excellent chemistry and hopefully we’ll see more of them together next season, too. Another question that springs to mind, though – do different species of Wesen often get together? From what we’ve seen so far, they don’t… so is that why Monroe and Rosalee are hesitating? Only time will tell.

Renard and the royal families are still mysteries – from today’s episode, it’s clear that Renard isn’t a Wesen himself. If he was, wouldn’t he have been better able to defend himself against Kimura? Hopefully we’ll learn more about the royal families in season two also. And what happened to everyone being after that key that Nick has? That’s yet another reason why Adalind may be back next season, as she probably wants to redeem herself to Renard.

Poor Hank… he’s slowly losing it, and at this point, I don’t know if it would be better for Nick to tell him the truth or not, especially considering how badly that went with Juliette. Juliette’s reaction made little sense after last week’s episode where she told Nick she wondered about there being ‘other things’  out there – I would’ve thought she would’ve given what Nick was saying a little more consideration, especially when he brought up the test results she’d gotten on the Wesen hair. When she recovers (and she’d better!), I hope she’ll have more of an open mind. Maybe once she meets her future mother-in-law and hears the same thing from her, she’ll be more likely to believe it… and I think both Monroe and Rosalee should show off their Wesen to her.

So that leads up to Mom showing up, decidedly not dead. Where’s she been all these years? Is Nick’s father alive, too? What was with the faking-her-death thing? Let’s hope it’s not another of those hiding-so-my-kid-will-be-safe stories, because those are overdone and lame. It’s better to be around to teach your child and protect him – not leave him with your sister who also is hiding her other life from him and then ends up dying without teaching him a thing… in my opinion, anyway. So don’t let me down, Grimm writers! I’m already looking forward to season two which will start in late summer, and hopefully getting more answers after this excellent cliffhanger!