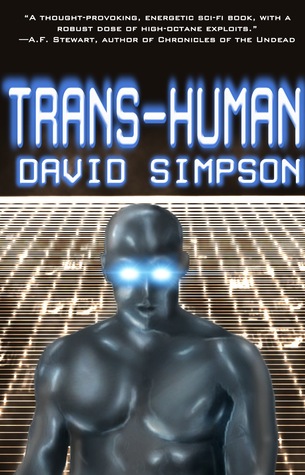 In Trans-Human by David Simpson we return to the ‘world’ of James Keats where we quickly discover, as James does that a new enemy – far more dangerous than the A.I. is on it’s way to Earth. It’s origins and motives are unknown but the size of the threat cannot be mistaken and as Keats attempts to convince the authorities to order a planet wide evacuation he must once again struggle to find a way to save his species, his planet and his universe. James is joined in his perilous quest by his old team – all loyal and willing to risk their lives for him but he is also joined by a former enemy, The A.I. who has it’s own hidden agenda – What are it’s goals? Can it be trusted? What is it hiding?

As an invasion force of untold proportions threatens the human race James discovers more questions than answers and a secret that could change everything he’s ever known or thought. As his team spreads out across the world and space to combat the looming threat and safeguard the human race James must battle politicians, a hostile alien species whose power and technology eclipses Earth’s own and throughout it all The A.I. is taunting him, forcing him to second guess himself and potentially everyone and everything as they all head to one final apocalyptic showdown. And in addition he must contend with friends who are suddenly into enemies with only one goal – to kill him and enslave the human race.

As James and his team hurry to complete their mission they all must face (In their own ways) one simple but complex question: What makes us human? You would think that was an easy question to answer but as James and the other characters struggles with it you’ll see it is far harder to answer that anyone could imagine.

Even if Keats can save the world the question remains: At what price?

Just as with Post-Human the quality of the writing here is amazing, the characters are as vibrant as ever and the world within the story is described in such a way that you can see the details in your mind as easily as if you were looking at it through your own eyes. That in and of itself is quite a feat; many books and many authors lack the descriptive detail necessary to fully immerse you in their ‘worlds’ but you won’t find that problem in Trans Human. David has created a highly fantastic world with technology and ideas that are beyond our wildest imaginations yet he presents it so flawlessly here and you can’t help but think that this stuff could possibly happen one day…

This book has, just as it’s predecessor did, themes we’ve all seen before in books and movies such as TERMINATOR and The Matrix but the approach is fresh and the tale is intriguing.

The Science Fiction is obviously strong in this story but as intense as it is it is not overwhelming mixed in with all the nanites and flying and laser weapons and personal shields there is one element that is crucial to the success of any story – humanity: human emotions and human struggles that while seeming mundane are actually key ingredients that heighten the ability of any reader to enjoy the story even if SciFi is not their forte and if sciFi is your forte then the “human” elements will not detract from the overall story.

Trans-Human is available on Kindle from Amazon here:

And in paperback format here:

And if you prefer a hardback edition, that is also available here: