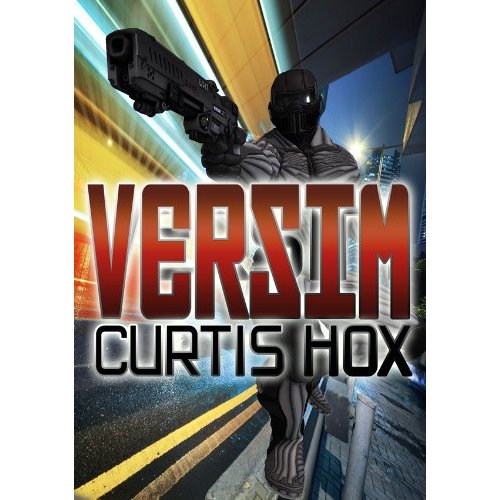 This is the world presented in VERSIM by Curtis Hox and it is a world that I imagine many of us would relish the chance to enjoy if it were possible.

From the very first sentence the reader is plunged into the mind of the book’s hero Harken Cole, an “entertainment specialist” whose job it is to take on whatever role is demanded of him for his legion of adoring fans. Cole is a superstar quite possibly the most famous and most popular of all the specialists but he has a secret, as the result of a carefully guarded promise made years earlier to a friend Cole is essentially a slave to the system, he must answer to faceless people and groups who only want to make themselves richer and more successful and they will stop at nothing to reach their goals.

Waking in his latest assignment with no access to his high tech tools and gadgets Harken has no idea who he is meant to be or what he is meant to be doing. A series of cryptic clues eventually lead him to a young woman who has secrets of her own, a seemingly random and helpless celebrity type who could hold the key to everything. Protecting her places Cole in direct opposition of some very powerful and dangerous foes that know his secret and are determined to exploit it even if it means the death of millions of people around the world.

Aided by a very small group of allies including his brother and sister in the “real” world Cole must weave his way through a myriad of lies, deceits and cover-ups to unearth the truth of his mission and to unmask the true threat. As he battles inside his siblings risk their own careers and lives on the outside by trying to also uncover the identity of the culprit/s and the full scope of the danger.

As the story reaches it’s violent and explosive finale Cole finds that even those closest to him may not be completely trustworthy and if he doesn’t trust the right person it could mean the end of everything.

VERSIM is a very well written, action packed Sci-fi thrill ride that you will enjoy. There is obviously plenty of Scif-Fi stuff to entertain and thrill even the most hard-core of geeks (Because let’s face it who wouldn’t want to be able to ride along with our favourite actors/characters as they battle aliens or engage in an epic love story? – Just for example).

There is action, adventure, love, death, deception, conspiracies, intrigue, revenge, and loyalty and on top of it all you are presented with characters that despite living in an “unreal” world are as real and genuine as any characters in such a story can be. You can believe they exist and you can sympathise with their various plights.

I would strongly recommend everyone with access to Kindle read this book because you will not be disappointed.

VERSIM is currently only available on Kindle from AMAZON here: