Wreck-It Ralph (voice of John C. Reilly) is the bad guy in a classic 8-bit arcade game named Fix-It Felix Jr., a game in which Felix (Jack McBrayer) fixes buildings destroyed by Ralph.  Ralph, who after 30 years of being the villain, longs to be a good guy for a change and sets out to prove he can accomplish just that. 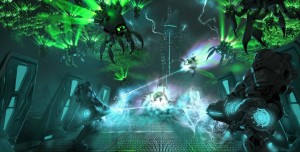 When a hot new FPS game called Hero’s Duty arrives at the arcade, Ralph sees this as the chance to prove himself a hero.  Escaping through his game’s power cord, he makes his way into this slick new shooter where he tries to help the game’s hero, Sergeant Calhoun (Jane Lynch) fight alien invaders.  Ralph just wants to win a medal so he can prove that he’s got what it takes to be a hero, but true to his name he wrecks everything. 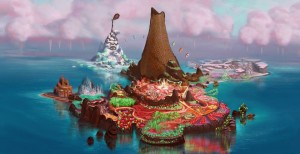 Later, he ends up in a kart racing game called Sugar Rush where he meets Vanellope von Schweetz (Sarah Silverman) and learns this game, and possibly the entire arcade, is faced with a threat Ralph himself may have caused.  Now his only hope and help is the lovable little glitch Vanellope.  Will it be enough?  Of course it will, but the fun is in the journey, not the destination!

There are many characters in the trailer from actual video games and it’s a lot of fun to see these guys together.  Even though it’s just a trailer we get to see a lot of “familiar faces” and one can only hope there will be more in the film who didn’t make the cut for this first-look trailer.  The movie’s release isn’t until November 2, 2012 so this is just the first of what will surely be many more trailers & assorted videos, but it’s enough to have me wanting to see this film.

Wreck-It Ralph (voice of Reilly) longs to be as beloved as his game’s perfect Good Guy, Fix-It Felix (voice of McBrayer). Problem is, nobody loves a Bad Guy. But they do love heroes… so when a modern, first-person shooter game arrives featuring tough-as-nails Sergeant Calhoun (voice of Lynch), Ralph sees it as his ticket to heroism and happiness. He sneaks into the game with a simple plan—win a medal—but soon wrecks everything, and accidently unleashes a deadly enemy that threatens every game in the arcade. Ralph’s only hope? Vanellope von Schweetz (voice of Silverman), a young troublemaking “glitch” from a candy-coated cart racing game who might just be the one to teach Ralph what it means to be a Good Guy. But will he realize he is good enough to become a hero before it’s “Game Over” for the entire arcade?

Disney has both a Wreck-It Ralph Facebook page and a website for the movie that has the trailer and a host of activities such as “wrecking” the trailer, the story synopsis, downloads, and even the ability to play Fix-It Felix Jr. right on the site!  Check it out at the Official Wreck-It Ralph Website.