“Merida is a skilled archer and impetuous daughter of King Fergus and Queen Elinor. Determined to carve her own path in life, Merida defies an age-old custom sacred to the uproarious lords of the land: massive Lord MacGuffin, surly Lord Macintosh and cantankerous Lord Dingwall. Merida’s actions inadvertently unleash chaos and fury in the kingdom, and when she turns to an eccentric old Witch for help, she is granted an ill-fated wish. The ensuing peril forces Merida to discover the meaning of true bravery in order to undo a beastly curse before it’s too late.”

When I first heard about Brave and saw the trailer, I was immediately excited about this movie. I have never been much of a fan of the traditional Disney princess. Pretty, feminine and well, perfect. That’s one heck of a model to live up to, but Merida is more real. She’s more like the girls I’ve known growing up and the girl I was and still am. She doesn’t like constricting dresses. She loves archery (and has a beautiful bow, I might add) and prefers to be running around outside getting dirty and having fun. She messes up, because she’s not perfect. She has more in common with her father and has never been fond of lady-like activities. Merida is a tomboy and a refreshing change to the age-old princess.

Aside from the similarities the leading lady possesses with so many of the people I know including myself, Brave has many great reasons to watch. The story is compelling and fun, the characters are humorous and the animation is amazing. 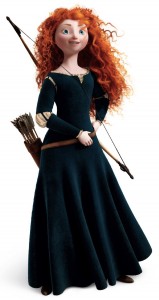 Brave introduces the skillful archer and fun-loving tomboy, Merida, as she is in training to be a lady and eventually take over as Queen. Due to her defiance, Merida is constantly butting heads with her mother, Queen Elinor. After learning that she must choose a suitor and be married to someone she doesn’t know, Mer ida’s defiance amplifies as she attempts to find a way out of her fate.

The three lords of the kingdom each arrive and present their sons as potential suitors for Merida. Unimpressed and uninterested, Merida figures out a way to enter the competition herself and causes a huge upset, which angers her mother. When the Queen reprimands Merida for her actions and burns her bow, Merida leaves the castle in search of way to change her fate.

Deep in the forest, she stumbles upon a witch who gives her a spell that will change her mother so Merida can change her fate. Merida returns home and gives the enchanted cake to her mother as a peace-offering, but soon learns that the spell was far more literal than Merida had intended and changes her mother… into a giant bear. After getting her mother/bear out of the castle and away from her father, Merida starts on a journey to discover a way to break the spell and get her mother back before the change becomes permanent and she loses her mother forever.

Brave is full of fun characters you can’t help but laugh at and with. Merida and her mother are central characters to the story. Merida as a tomboy is fun to watch as her mother forces her into uncomfortable clothes and situations. She’s outgoing and fun-loving with a great spirit and a delightful accent, while her mother is the epitome of a frustrated parent. As a bear attempting to be a lady, however, she’s priceless. From her attempts to cover up with a blanket despite being covered with fur to wearing a crown on her head or attempting to eat like a lady, the subtle lady-like behaviorism of a bear were quite humorous.

Rounding out Merida’s family are the three triplet brothers, Harris, Hubert and Hamish, who are amusing to watch as they steal sweets and sneak in and out of the castle causing mischief; and her father, the lively King Fergus who is full of joy and tales from heroic battles and more than happy to share the story of how he lost his leg to the demon bear, Mor’du, with anyone willing to listen. 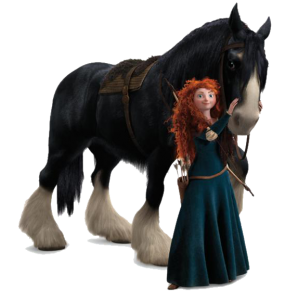 Then there are the supporting characters, the three lords and their sons – Merida’s potential suitors. First is Brawny Lord MacGuffin with his son, young MacGuffin who is large, shy and completely unintelligible. Next is the crabby Lord Dingwall with his son, Wee Dingwall who is awkward, gawky and lanky often achieving success through dumb luck. And last the lean, huffy Lord Macintosh with his son and the greatest potential suitor, Young Macintosh, who turns out to have the worst, most unattractive temper of the three.

Best of all, however, are the two most amusing supporting characters: Merida’s horse, Angus, who has a personality of his own as he reluctantly follows Merida on her adventures; and the bouncy maid the triplets love to torture and steal sweets from who lends some great comedic moments to the movie.

Let’s not forget the biggest intrigue of this movie: The animation, which in my opinion was superb. The landscapes, the fiery falls, each of the characters, the castle, the bridge, the flora, and most importantly, Merida’s hair, were all fantastically crafted. I can’t even describe how awesome Merida’s hair is, I actuallywant her hair, and it’s ANIMATED! I haven’t done much animation, but as an artist, even just as a fan of animation, it’s hard not to appreciate the amount of work that the animators put into this movie, especially with Merida’s hair. Did I mention I really love her hair?

Ultimately I definitely have to recommend this movie. Admittedly, I have been more intrigued by other animations and their stories *cough* How To Train Your Dragon *cough* but Brave is still on the top of my list. It’s a fun, family friendly movie with some great animation, comedic moments, a good story and a fun leading lady who isn’t girly, who isn’t waiting for her prince, who isn’t interested in marriage (at least for now) and is more relatable than any other Disney princess I’ve seen to date.

Brave is in theaters now, so grab your kids, or if you don’t have kids, grab someone else’s like I did (preferably with their parents’ permission) and check it out. Or just go by yourself and have fun!

Here are some links for more information about Brave: