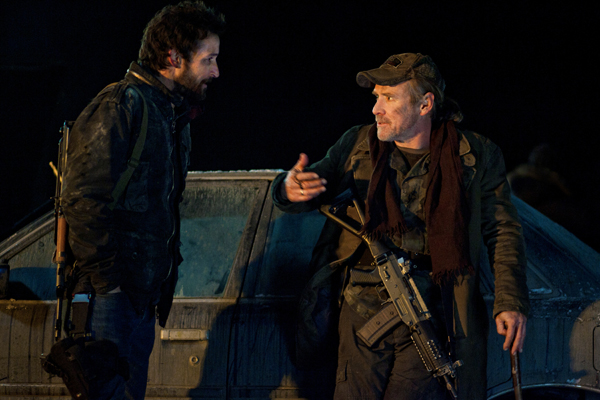 Karen and Ben ran off, and Karen continues to pretend with Ben that she wants to run away with him and starts questioning him to get information. Asking about where they are going and about the skitters who seem to be able to resist the harnesses effects. Ben explains the leader of this rebel force contacted him through his spikes. Karen and Ben both notice skitters near by as their spikes glow. Ben realizes they are not rebels, and Karen says “you are right, they are not rebels. They are with us.”. Ben finally comes to the realization that Karen has betrayed him. Over the ridge comes a large group of skitters and mechs, guns trained on Ben and the overlord that spoke through Karen while Tom was being tortured. She tells the overlord their suspicions were correct, he has been in contact with the rebel leader.

Karen and the overlord intend to re-harness Ben. He claims he won’t tell them anything. A skitter comes up behind Ben and restrains him as Karen prepares to harness him again. The skitter prepares to push Ben over so Karen could attach the harness when a sniper shot kills the harness and shots it right out of Karens hand. Tom and his team have caught up with them in the woods. Remember that when Pope woke up they learned that Karen was playing them. They took off after her and to save Ben.

A fire fight ensues as Ben runs for cover. Its not too long before Tom runs into the overlord and standing face to face, puts a gun to him and all of a sudden all the mechs stop shooting. They won’t risk the overlord getting killed. Ben comments that he is too important, and Tom decides to take the overlord hostage. Back at the hospital we see Matt awaiting their return afraid. Maggie is getting stitched up by Dr. Glass and she refuses to rest, she wants to go find Tom and the others. 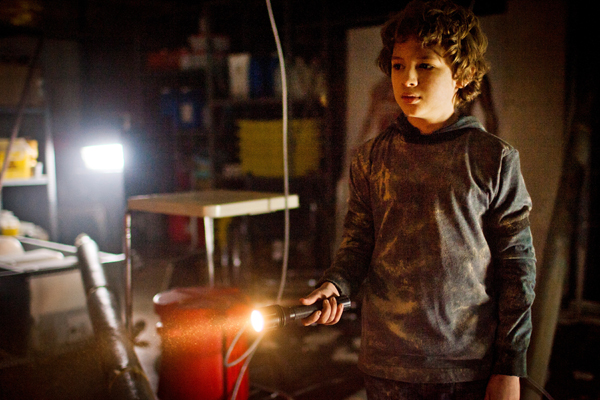 Jamil and Lourdes talk about Tom and his team looking for Ben. Matt hasn’t left the window since Karen took off with Ben and Jamil doesn’t think their team will return. Matt hears them and angrily replies that they are coming back and they are coming with Ben. Weaver backs Matt up and offers Matt a job, protecting Anne and Lourdes as they go into the basement to get more medical supplies.

Tom and his team return with a new prisoner of war, an overlord. Mechs and skitters start to surround the camp, they are not too happy with their leader being taken hostage. A fire fight ensues, and they aren’t shooting very well. They think its a distraction while they sneak in the back door to rescue their overlord. They were right. Tom cuts off a mech and skitter group coming in from the back. Tom shoots a propane tank destroying the mech but also causing a collapse in the basement that traps Lourdes, Matt and Anne.

Karen shows up with a white flag in hand just down the street from their blockade. Weaver reminds Tom this is the time for the hard choice regarding Ben. Tom refuses to give Ben up as a sacrifice to the aliens, and Weaver isn’t suggesting that. But they can no longer protect Ben, they have too many lives at stack. Ben has brought a lot of pain and death to the 2nd mass recently, knowingly or not.

Karen is looking for Tom and comments things have gotten out of control. Karen says if they give up her master, they are free to leave. Tom and Hal talk to her face to face and she tries playing off Hal getting hurt as something she was sorry for. Tom comments that they cannot have Ben. She understands that now and says despite what they think, she is still trying to help them. The overlord wanted to take a more aggressive approach with Ben. She suggests Tom talk to the overlord. They won’t back off until they know that he will be released unharmed. 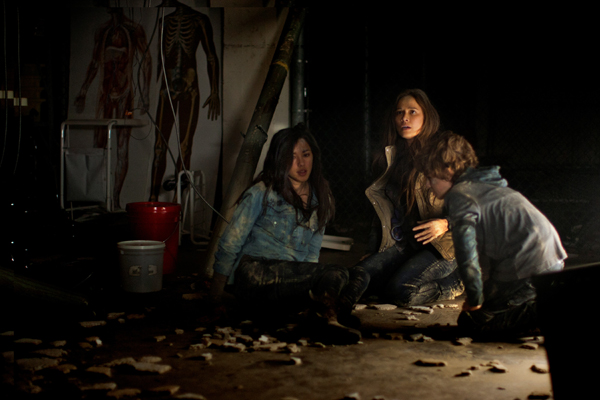 In the basement Anne, Lourdes and Matt are okay from injury but must find a way out and back upstairs. Jamil is sent to the basement to find them. Ben tries to apologize to Hal and Ben thinks he should have left days ago. Hal understand it wasn’t his fault. Ben tells Tom he will have to leave. Tom refuses to let him, he wants Ben to go to Charlestown to explain the rebellion to them. Ben says that didn’t go so well with red-eye and they didn’t believe him than. He is 16 years old and he is going to do this his own way.

Ben explains the other reason he has to go is the overlord. In the woods, it was attempting to read his mind through his spikes and he managed to resist him but he didn’t know how much longer that was going to be possible. What Ben does know is that the overlord is scared of the rebellion and that means they would stop at nothing to crush it. That puts anyone near Ben in danger.

In the basement Anne, Lourdes and Matt run into Jamil badly injured and speaking riddles. Matt notices something behind the door near by. When he tries to open it, Jamil yells for him to stop.Hal and Maggie try opening an access tunnel to find a way around the alien defenses. Hal and Maggie share a kiss in order to get Hals mind off the fact that Karen isn’t what he thought anymore. Once they get it open, they find a new alien spider like creatures come out and scare the crap out of them.

As lourdes talks to Jamil, Matt notices holes in the door that were not there before. As Anne and Lourdes strap Jamil to a board, the alien spiders burst out of his mouth. Jamil is a trojan horse full of those spiders. Jamil is gone. They hide in a room nearby and scramble to find a way to destroy them. The first thing they do is send Matt through an airs haft to try and find help.

Karen with the white flag, wants to talk to Weaver this time. Lourdes is in a bad way, she has given up on everything. Tom, Ben, and Pope run into Matt. Karen says one of their fighters has a message for them. They captures Boone. He starts running back towards them as a mech starts slowly shooting him one bullet at a time. Karen says consider that a warning, they are out of time. Anne decides to use an O2 tank and make a flame thrower in order to kill the spiders and get out of that room, just as Pope and Tom come to rescue them.

Tom decides to pay a visit to the overlord, Ben goes with (not the best idea). The alien stands up, breaking his chains easily. The overlord starts talking through Ben. The alien explains they want peace, Tom thinks they want genocide. The alien explains if they wanted that, they simply would have killed everyone. They have no interest in eliminating the human race. He said think of it as a correction, your planet is spiraling out of control over limited resources. Once their task here is done, they will move on. Tom asks what that task is and his reply is simply “none of your concern”. But continuing to interrupt our plans will only cause you more pain. Tom says they will bleed them at every turn. The overlord says they don’t have the strength to do it. They are crippled by sentiment, case and point. Bens spikes stop glowing and he is sent into convulsions on the floor, bleeding from nose and mouth. He says you are in over your head and says to release him now. 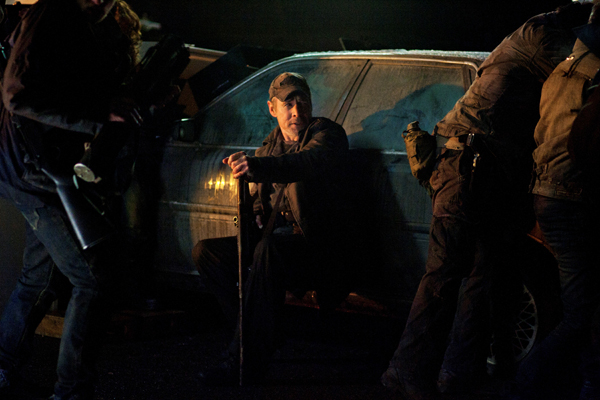 Tom shots him in the neck. They are shocked a fish head would risk so much by going out into the field. They were desperate to get Ben. Tom is convinced the rebellion is real, otherwise everything that has happen doesn’t make any sense. Weaver still isn’t 100% convinced the rebel cause is real. Tom and Weaver decide to bring Karen in to show her that her master is bleeding out. She tries to play off to Ben that she is happy he is okay and that this all had to happen. Thats when she realizes her master is bleeding out.

Karen makes a run for Tom but Ben holds her back. They tell her if she wants to save her master, she must let the second mass leave. If she doesn’t, the building is rigged with enough plastic explosive to blow up the entire building. 2 men hold the triggers, one of which is Pope. She says their airstrike would kill them all if they did, but Tom replied “and it would kill you and your master as well”. The agreement is made and the 2nd mass pulls out while the mechs stand down in front of the hospital. 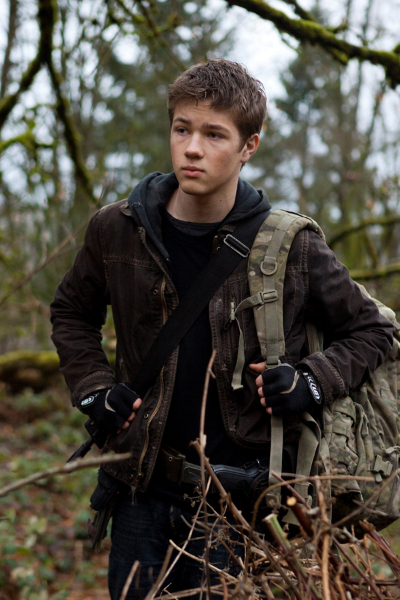 As the 2nd mass takes a break on their push to Charlestown, Ben stands off at a distance in the woods. Ben is planning to leave, backpack in hand. Just as Ben turns around to leave, Tom is behind him. Tom wants to know why Ben is taking off without saying goodbye. Ben figures he would have tried to stop him. Ben feels its for the best that he go. They won’t stop coming after Ben, not until they get their way. Ben was able to see some of the overlords thoughts. he saw, felt what these aliens are all about. Tom and Ben have an emotional goodbye. Ben promises they will see each other again. Tom watches as Ben walks off on his own, alone.