Hal and Maggie stumble upon a pile of dead de-harnessed kids and Karen is among them but she is alive. With Hal and Maggie growing closer, what does Karens return mean for them?

The biggest question comes from Ben who immediately tells everyone not to bring her into the 2nd mass, she cannot be trusted. Ben’s trust among those in the 2nd mass has come into question recently due to his protection of red-eye. Can they trust him?

Maggie appears to not be too happy with Karens return, and in the sneak preview tells her to ‘Lets stop playing games’. What does Karens return mean for Maggie and Hal? They just started growing closer and now a former girlfriend is back. Just what can we expect from Karen?

Connor hinted to Karens character and how she would interact with everyone in upcoming episodes:

Whats so interesting about Karen, is that she is tied so intricately to Hal. Drew always says she was his first love. But there is a relation, as you said, between Ben and Karen because she is now in the exact situation Ben was in not that long ago. Any person who was harnessed has a connection with one another. If Karen happen to come back, I think that is an element we would have to address. Karen as a person is nice, but now she’s not so nice. They have taken this innocent likable person and turned her into the voice of Saron, you know they have turned her into the voice of evil.  And its difficult for Ben because that plays into his fears of what might be happening to him. Or even Toms fears of what might be happening to him. So if Karen were to come back, it would be instrumental in a lot of characters lives.

What is wrong with Weaver? The bite from the harness doesn’t seem to have gone away and his health is in serious risk. With the 2nd mass held up in the hospital someone is going to have to take over the leadership role for Weaver if he is sick.

Connor Jessup has commented that Homecoming and Molon Labe are his 2 favorite episodes and he is right. These two episodes have a lot going on with Ben. The preview also hints at some conflict involving Ben and Hal with regards to Karen as we see Ben and Karen on the roof with Hal pointing a gun at Ben.

Many in the 2nd mass do not trust Ben and as Connor hinted at in our recent interview, this leads to some tension between Hal and Ben:

That relationship was a lot of fun. Drew, who plays Hal, is a really cool guy and a great actor. My scenes with him this year were some of my most enjoyable. I enjoy doing those scenes with him. I enjoy the dynamic of tension and misunderstanding and confusion. But also at the core of it, a brotherly affection. We are not that different. What is most interesting about this dynamic is Ben this season is not all that dis-similar to how Hal was last season: Ive taken over the roll of the bull-headed, stubborn, violent one.  So I think there are a lot of parallels between Bens interactions with Hal this year, and Toms interactions with Hal last year.

What will Karens return to the 2nd mass mean for Hal and Ben?

Checkout this sneak preview and an exclusive photo from next weeks episode. 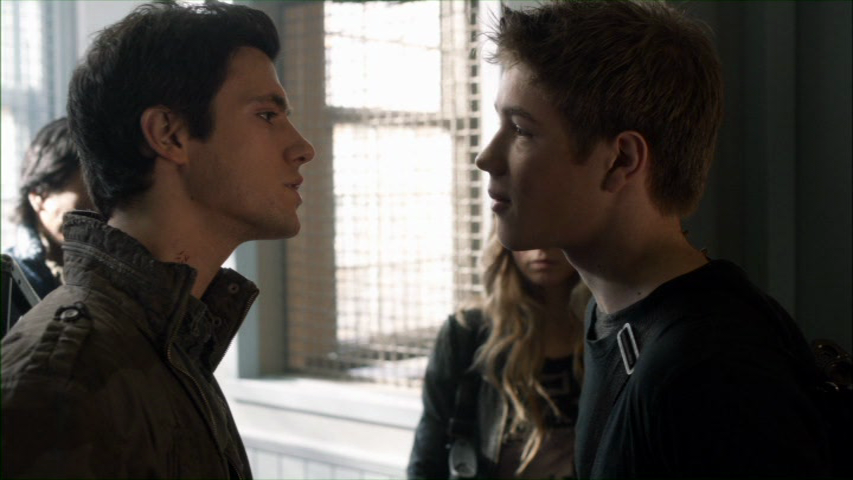