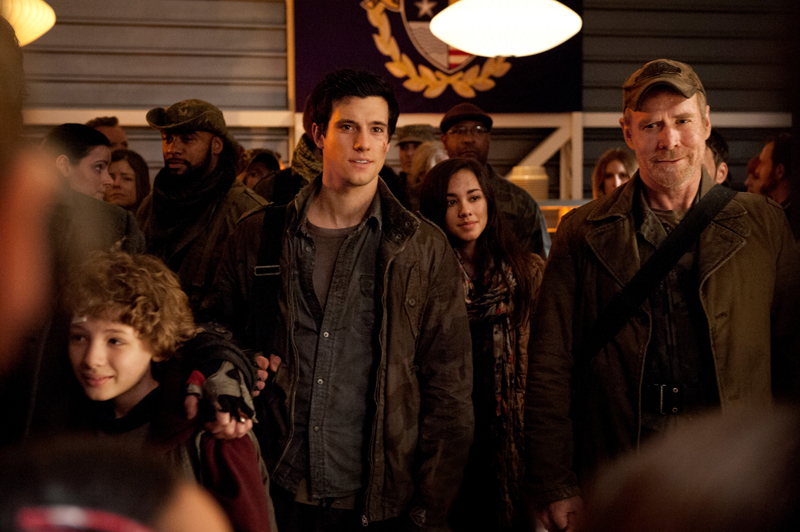 The 2nd mass has arrived at Charleston. It is underground. They used an underground parking garage to setup their new city to avoid alien detection. They have running water, power and fresh food. Everyone in the 2nd mass is shocked and happy at what they see. Everyone in Charleston applauds them, as Tom has grown as a bit of a legend among everyone over the many months.

Weavers daughter is in Charleston and is able to see her father again. It seems Diego and the others didn’t make it. Shortly after they left the 2nd mass, Diego and the others were caught by skitters. Pope and his Berserkers want to leave soon, they think something is up. Matt is happy, he sees lots of kids and wants to go to school.

An old friend and mentor to Tom is there, Arthur Manchester (Terry O’Quinn). It appears he is running Charleston, president by popular vote. Tom gives him a list of their names so they can find places for everyone to sleep. Weaver and Tector are brought in front of General Breseler (Matt Frewer) to discuss their military duties and how things work around Charleston.

Weaver points out to the General the attacks they made against the aliens and wants to push more attacks at them. However, the General says they won’t be needing their scouts. The aliens have no reason to attack Charleston because they think there is nothing there. It was the decision of the cilivan government (meaning Mr. Manchester) that they would use this to re-build and lie low and not attack the aliens at all.

A fight is starting to break out between the 2nd mass and a sergeant with Charleston. Weaver wants to know whats going. Tom tells him they are trying to disarm all of the 2nd mass, and Anne points out they are spreading the 2nd mass out over 10 different housing districts. Porter agrees to back Weaver whatever he decides and Weaver feels its in their best interest to let them take their weapons. Tom goes with Weavers decision and they start to hand over their guns.

Tom and Anne are sleeping in a bed again, but in more of a home this time. A knock in the door brings a newspaper, the South Carolina Gazette. There was also an invite from Arthur to talk with Tom and Anne has been assigned to the medical ward. It appears that Arthur is up for vote again and he is looking for Tom to stand with him and rally the troops around him. Tom thinks he may reconsider.

Tom discusses the alien encounters they have had and talks to him about the rebel skitters. Tom wants them to ally with them and Arthur is completely against it. He also warns Tom not to discuss this with anyone, period. Weaver is in new military attire and his daughter is on food duty. She talked to her dad about wanting to send a patrol to go and look for Diego, they might have escaped but Manchester refused to send out a patrol.

Anne arrives at the clinic and is met with a rude doctor who treats her like a first year med student. Anne puts him in his place, telling him she was the 2nd masses combat medic, not an intern. The food isn’t the best the second day, Manchester put out a special ‘plate’ for everyone the day they arrived. It seems Anne and Tom getting their own place was not normal for everyone. They are sleeping 10 to a room but Tom has been given a special room.

Something isn’t right, everyone is so calm, as if they think the aliens have gone. Now we see Tector in full military attire and taking orders from the sergeant. The sergeant gives Pope a good talking and forces him to fall in. Hal is spending his time doing gun building drills. He wants to leave after doing his fast and leaving the others behind. Weaver pulls him aside and wants him to stay with the new guys and teach them how to shoot.

Maggie grabs a gun for herself, she knows Pope is up to something. Matt hates school and Charleston. He got injured during an apparent dispute over some kids talking trash about the 2nd mass. They are saying the 2nd mass is lying and never fought the aliens, that they were cowards. It seems things are not as nice as everyone had hoped.

Crazy Lee and Lile are breaking into the armory with Pope trying to steal weapons. Maggie tries to stop them but the guards come in and arrest them all, Maggie included. Tector shoots Lile. Tom wants to talk to Arthur about the Berserkers and Maggie. Arthur doesn’t agree about letting them go. Manchester doesn’t want to ruin the ‘utopia’ that he has created. He isn’t interested in going to war.

Hal and Maggie have a talk. Hal doesn’t want to let her stay in there over what Pope did. Hal is okay with Maggie’s past but she doesn’t believe him. She just wants to be left alone. Weavers daughter speaks up at the vote for Manchester and says she is upset over them doing nothing to find their missing loved ones. Hiding, hoping the aliens will just go away.

Tom does a speech about driving the aliens away. They will only leave this world when the cost is too high. Tom uses a quote from Manchester’s own book against him in a speech asking for Charleston to go to war against the aliens. He knows he has to keep fighting, they cannot hide from them anymore. The sergeant storms in, a de-harnessed boy showed up near by and he has a message for Tom. Is Ben back? No, and the boy doesn’t know who Ben is. He was sent by red-eye. He is near and wants to talk to Tom right now. Manchester is extremely afraid of this and doesn’t want Tom to go out there.

Manchester thinks Ben may have given away their location and is upset that Tom didn’t disclose this information before. He orders the General to lock the boy up and they are going to ‘hide’ until the skitters leave. Manchester feels Tom slapped him in the face. There will be a price to pay for this. Pope is brought into Manchesters office and offered a steak and wine to eat. Pope approves of the food, which is a hard thing to do.

Arthur wants information on Tom Mason from Pope. Arthur thinks that Tom is a safety risk for the city and wants information from Pope. If Pope gives up Tom, he is free. Pope says he is a pompous history buff and if anyone is going to knock him off his pedestal it will be Pope, not some dictator like Manchester.

Hal shows up to see Maggie again and knocks out the guard. Dai is there to help him unlock the cage. They let Maggie out, but leave Crazy Lee and the others behind. They also grab the boy who came with red-eye. Porter offers them weapons and help getting out. They start to leave and are stopped by General Brewer and the guards. Tom, Weaver and the others are all placed under arrest. Tector decides to side with the 2nd mass and is also placed under arrest.

Porter gives the General a hard time, asking if he has the balls to stand up to Manchester. Arthur has declared a state of emergency and anyone causing problems is to be arrested. The military starts to round up everyone from the 2nd mass, civilians and all. They are all put in the gym area and separated from the rest of the population.

Manchester is using the list Tom gave him against them to round everyone up. Arthur doesn’t think anyone from the 2nd mass can be trusted. Arthur used the treat of arrest to get members of the 2nd mass to give up information on Tom and Weaver that would help him take them down. He wants Tom and Weaver on trial for treason and will then deal with their sympathizers.

It appears that Brewer has decided to side with Tom and start a coup against Manchester and the civilian government. He has declared marshal law, but Tom didn’t want this.