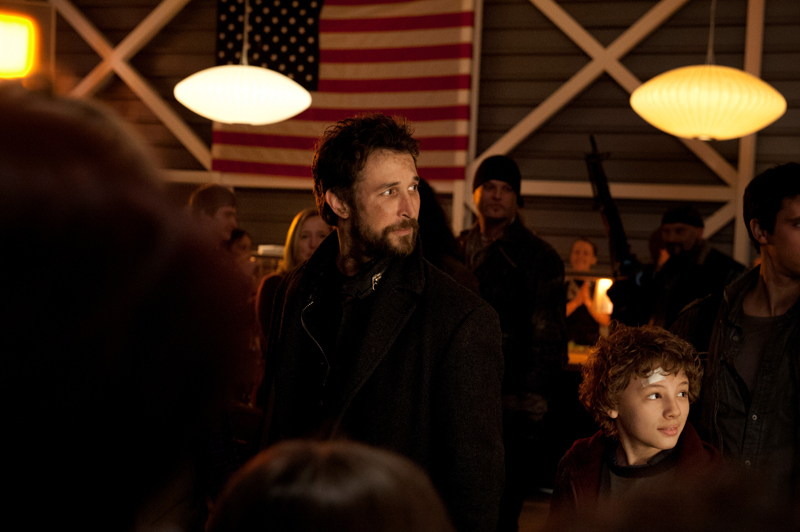 The price of greatness is complacency and paranoia. The 2nd mass has arrived to their Utopia but Pope and his gang feel right from the start that something is off. The 2nd mass is greeted like celebrities and Tom meets a former teacher and mentor Arthur Manchester (Terry O’Quinn) who also happens to be the man in charge by popular vote.

Throughout the episode the great food, living quarters and people, start turning into everyones worst nightmare. The military are lame ducks at the mercy of a general who won’t stand up to the paranoid Arthur Manchester and refuses to hear anything of a skitter rebellion or fighting the aliens. Even young Matt who was excited to go to school again found himself at odds with the kids. They think the 2nd mass are liars and cowards and never fought the aliens.

If there is one thing we have learned about humanity, is that in many cases we are our own worse enemies. Arthur will do just about anything to stay in power and pamper Tom and Anne in order to use Tom to help him win the popular vote. After Tom attempted to reason with Arthur about taking the fight to the aliens, Tom used the vote night against Arthur in a speech that fired up the city. A speech inspired by the very thing Arthur wrote in a book before the invasion.

Just as the speech was wrapping up it appears a de-harnessed boy showed up, looking for Tom and he has a message from red-eye.  Tom misses Ben badly and hopes that is who showed up, but it was not. Tom wants to go meet red-eye who has important information but Arthurs paranoia turns on full not wanting Tom or anyone to make contact, he just wanted to hide.

Pope has another great scene in this episode when he is brought to Arthur and offered asylum and the ability to leave with his group if he will give up information on Tom Mason. Pope is no fool and tells Arthur if anyone is going to take down Tom Mason it would be him, not some 2-bit dictator of Charleston SC. However, Arthur ended up getting the ammo he needed when he forced the information out of some members of the 2nd mass under the threat of imprisonment.

Terry O’Quinn has always played some of the best villains on TV. Many of his long time Lost fans all felt he could not be trusted and that he would be a villain here too. General Bressler (Matt Frewer) who has spent most of his time not standing up to Arthur finally did after Tom and the others were arrested trying to leave the city to meet red-eye. This military coup put Arthur in jail and the military in power. Did they eliminate one dictator for another?

During our Comic Con trip, we spoke to Noah and Will about General Bressler (played by Matt Frewer) and Arthur (Terry O’Quinn). They commented that these 2 are very important counters to Tom and Weaver, ‘doppelgängers’ if you will. Just what is the 2nd mass going to do now that the military have taken control?

Overall a great lead up to the finale. Some will say, we did the humans betraying humans in season one with Sanctuary. The difference there was it was trading kids to the aliens. Here we look at a paranoia state with a dictator that refuses to accept there is still a fight to be had against the aliens. He will stop at nothing to prevent everything ‘he’ has built from falling apart.