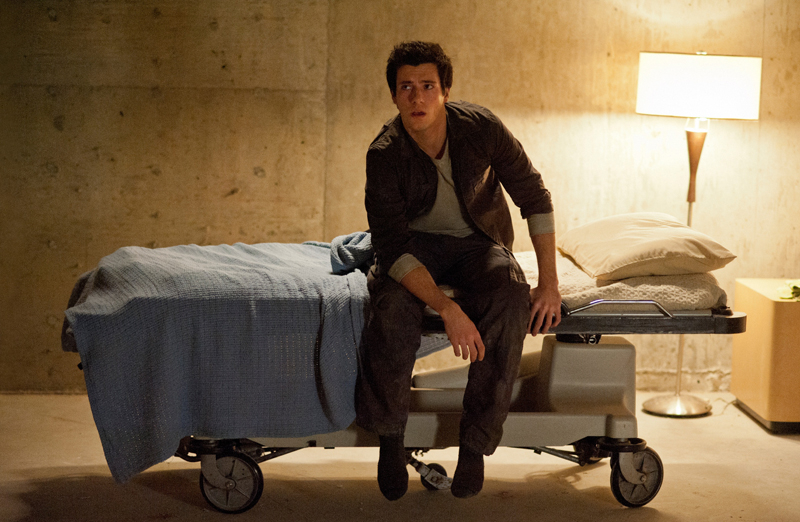 Tom and the others find themselves in the middle of an old fashion coup. Tom got what he wanted, the go ahead to meet with the skitters but Tom refuses to do it like this. General Bressler orders them all back in the cages when the alarm starts going off, aliens are in the compound. Upstairs the 2nd mass members who had been rounded up in the commons area were scrambling to get away from a small army of skitters that have infiltrated the compound.

The troops arrive and are preparing to fire when Tom notices that he knows one of those skitters, its red-eye. He asks the general not to fire but the troops continue to line up and aim their weapons. Just than Tom turns back around and we see Ben. He asks them not to fire, they are not there to harm anyone. Tom and Matt are thrilled to see Ben again. Remember Ben left 2 episodes ago after causing so much death and pain to the 2nd mass. Hal seemed a bit more shocked then anything else.

The army refuses to put their guns down and so members of the 2nd mass begin to form a human shield around Ben and the skitters to protect them. Bressler finally decides to stand down and allow them to live. Ben and red-eye are brought into the briefing room to talk with everyone about why they are here and whats going on. Red-Eye uses Ben to speak to them about recent developments with the overlords.

It appears the 2nd mass didn’t know the prize they had when they captured that overlord. He was in charge of the entire military operations in the eastern part of the US. If he had been killed, that would have thrown operations in the east into complete chaos. Tom and Weaver are puzzled as to why 1 overlord would have such power. The ‘Ashpheny’ as they are known have no need for storage devices or computers and thus everything is operated in their minds. Each one controls huge sections of their interplanetary operations.

General Bressler isn’t concerned with this information and wants to know why they should care. Red-Eye continues to explain that through operatives still in the Ashphenys higher ranks, they know when and where this overlord will be and want to take this chance to strike. They are constructing a weapon not 500 miles from Charleston. Its purpose is unknown according to red-eye, however he claims its not important. The skitters need the humans help because their harnesses make them unable to make the attack without being discovered.

Ben has to leave with red-eye despite Tom wanting him to stay. The General feels this is all a bunch of crap. Weaver and Tom try to convince Bressler that the rebellion is real and he orders the skitters and Ben shot if they approach the city. Weaver and Tom threaten to be a major pain in the ass to army of Charleston if they don’t let the 2nd mass take on this mission. It appears though the General is being sneaky. He orders the skitter group to be ambushed and killed.

Hal goes outside to find Ben, and finds the skitters hanging on an overpass. He is approached by several deharnessed kids who surround him and Ben appears from behind the woods. Red-Eye allows Ben to spend some time with Hal and talk. They joke about Ben sleeping like the skitters and talk about Ben not being around and Hal wanting him to come back. Hal is sorry for his part in not trusting Ben when it came to Karen.

Ben feels things make sense now, he thinks he found the place he belongs, with the skitters. Hal tries to convince him that his place is with his family. Ben tells him that sadly the world doesn’t work that way anymore. They hug as Hal realizes he won’t be able to change Bens mind. Ben is with the skitters now.

Anne is sick, but not with a cold or flu. Anne is pregnant. Lourdes knows morning sickness when she sees it. Anne hasn’t told Tom yet and she wants to wait until after this upcoming mission to tell him. Manchester is on house arrest after everything that happen. He complains to Tom about the situation. Tom reminds him that we cannot stick our heads into the ground and pretend the aliens are gone. Manchester calls the mission a suicide mission.

Ben comes rushing into the room with Tom and Manchester. He is injured and bloody. Unknown to Tom and the others the attack that injured him and killed nearly half of the skitter group was arranged by the General, who plays it off as a rouge group of civilians who did it. Several of the deharnessed kids, including the boy who came looking for Tom were killed in the attack. Ben is pissed, saying they came here in trust.

Bressler cancels the mission. Ben is desperate to go on this mission. He tells Tom that if the weapon is completed it could destroy everything on this planet. He didn’t tell Bressler about this because he wasn’t sure he could be trusted. Ben has all of the plans and information in his head and can make this happen. Weaver and the others are still in for the mission.

Dai, Anthony and Maggie are loading up on weapons and tease Weaver about being back in his good old clothing. Weaver tells them to get moving before he kicks their ass. Jeanne wants to go with to help fight but Weaver won’t allow it. Ben is drawing the weapon out for the mission, something he is normally not good at, Tom points out. Ben comments its one of the many benefits of being harnessed.

Anthony and Dai have a new weapon to test out to bust through the wall of the facility and get in from underground, called the “wall crasher”. Tector shows up back in normal clothing and asks Pope if he can rejoin the group, Pope gives him the okay by making him drive. Matt wants to come with to help fight. But Tom points out he must stay behind to help Lourdes. She is lonely and has had a hard time. Tom wants someone to stay back to keep her safe.

We get a look at this weapon, a skyscraper pointing up at the sky. The 2nd mass is underground working their way to the structures base in order to blast through it. Bens map works and they find the base of the weapon. Anthony and Dai setup the device to blast through and blow a hole into the wall getting them into the chamber. Ben can sense that the overlord is close by.

Inside they look up at the enormous weapon, still unsure if its purpose. Ben however knows exactly what its for. Its pointed at the sky because it wasn’t meant for humans. So who was it meant for? They move out to set C4 charges around the weapon in order to destroy it. Just as Tom and Ben finishing talking Bens spikes light up and he senses skitters are here.

Dai is caught up in the hand of a skitter and no matter how many times he shot it, it threw him against the wall and killed him. The rest of the skitters trapped Ben and the others quickly and Karen shows up. Next we see Tom and the others tied up by their hands in these hanging cords. Ben tries to yell out saying not to listen to Karens mind games when 2 of the cords wrap around his mouth, shutting him up and Karen scolds him.

Karen explains her master is fed up with Tom and the resistance. He is very curious how Tom and the others found this location and knew he would be here. Tom says he will never tell her anything, he will die first. Karen agrees and say they will all day, her master will insist. She pulls out the staff used to torture Tom on the ship and begins to torture each of them one by one. First she locks lips with Hal and he is knocked out. Maggie starts to scream and gets the same silent treatment Ben got.

As Anne starts to scream, Karen senses that Anne is pregnant and she tells Tom, much to his surprise. Just as Karen goes for Anne again, Tom is ready to give up who he found this location. Just before he does, Red-eye shows up with more rebels and attacks Karen and the overlord, which results in all of them being released and falling to the ground. Tom goes one and one with the overlord, tripping him with the staff after Red-Eye injured him. He then stabs and beats the overlord to death. Karen is defiant and runs off climbing up to the roof.

Ben runs to red-eyes side who is gravely injured. He beings to download information to Ben and talk to him without the others hearing. His last words to Tom were to keep fighting. Ben is very upset and another skitters comes up to Ben and nods, showing a sign that Ben has inherited the commander role in the group and that they must leave now. Tector helps Weaver carry Dais body before they destroy the weapon.

Back at Charleston the 2nd mass returns, much to Bresslers shock with Dai in hand. Matt runs up to Ben and Tom happy to see them return safe. Matt asks Ben if he will be staying and Tom starts to explain Ben has important things to do when Ben interrupts him and says yes he will stay. And tells Matt to get a game started so Ben can kick his butt.

Hal is still in a coma and they have no idea why. We see Hal in a room on his own and he walks up but appears to not be feeling well. He walks up to the mirror and we see several ‘eye worms’ inside him. It appears when Karen was kissing him, she was putting these things inside him. We still do not know what their purpose is. Tom and Anne discuss he being pregnant and Tom says when he thinks about it, he is happy. Manchester has stepped down in order for Bressler to return rule of Charleston to the civilian government. Manchester offers it to Tom but he refuses.

The 2nd mass is leaving Charleston, and not fast enough, they feel this isn’t the place for them to keep the fight going. Just then the ground begins to shake and they think it might be an earthquake but Weaver says no. They go outside with everyone from the 2nd mass and Charleston and a huge lightning storm appears to be occurring overhead. Just then ships start falling from the sky and landing. A being in a suit of some kind steps out of the ship and opens his helmet to reveal a monkey type humanoid creature we have never seen before. The question is whose side will they be on and can we trust them?

Season 3 begins production this month and we will keep you up to date on all the latest information about the new season set to air in the Summer of 2013.