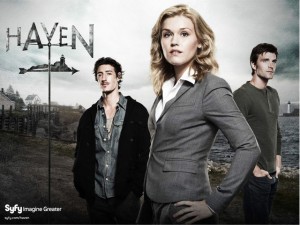 Haven was NOT a show that surprised me. The second I heard about it way back in 2009, I was expecting something great. Now, one thing I can’t claim to be is a Stephen King fanatic, but I like his stuff. IT, The Shining, Cujo, Stand by Me and others were all iconic movies to me as a child, and still are today. I have read quite a few of his books, and I have been planning on tackling the Dark Tower series any day now for about 6 years. I was also a huge X-Files fan back in the day, though I can’t claim to remember every bit of info on that show like I do with others these days. So, when I hear that SyFy Channel is doing a series based on a Stephen King short story, and that is going to be a weekly X-Files style mystery show, I get pretty excited. And it did not disappoint.

The show has some serious talent driving its performances. Emily Rose portraying orphan Audrey Parker/Amnesiac Lisa Ripley/Amnesiac Other People delivers a powerful presence as a woman on a mission: first to find out her connection to Lisa Ripley, then to help the people of Haven, Maine with powers or curses (termed the Afflicted), then to discover her true past. Lucas Bryant as Nathan Wuornos, the Afflicted police officer, son of the police chief in the first season, partner and “will they, won’t they” to Audrey Parker. Eric Balfour, my personal favorite, plays Duke Crocker, scoundrel extraordinaire with a secret heart of…well not gold, silver maybe. The townspeople are (for the most part) believable as residents of a small town in Maine. Richard Donat and John Dunsworth bring a comic relief into the mix, as the sometimes bumbling, sometimes withholding, but usually helpful brotherly duo of Dave and Vince Teagues.

Season 2 ended on a high note story wise and low note emotionally. In the finale “Sins of the Father”, the spirits of the dead rose in Haven to continue their unfinished business. Duke learns that his complicated relationship with late father was the result of his father and the Reverend’s (Stephen McHattie) quest to rid Haven of the “cursed.” We leave Haven, Maine as Audrey is being kidnapped concurrently with Nathan and Duke preparing to battle each other.

With the upcoming season we can expect to see a LOT of new faces. Iain Glen, recently and notably the wayward knight and guide to a princess Jorah Mormont on Game of Thrones, guest stars as Roland Holloway: a man bent on vengeance after being trapped inside his house for 27 years. Emily Rose’s recent Uncharted video game co-stars, Claudia Black and Nolan North also make appearances. Nolan North as a man named Anderson, who wakes up with amnesia to a town full of only the sleeping. Claudia Black, who science fiction fans will remember from Farscape and Stargate: SG-1 and various SG-1 movies, will appear in a two-part episode as a woman named Moira. Dorian Missick, of Southland and The Cape, will portray Tommy Bowen, a Boston detective come to Haven tracking down a possible serial killing case. Kate Kelton (Harold and Kumar, American Psycho 2) also appears as Jordan McKee, a waitress at the Gun & Rose Diner, and a member of an organization of Afflicted marked by a distinctive tattoo that has been foretold to spell doom for Duke Crocker.

So, lots of exciting stuff on the horizon for Haven, I can’t wait to see what is in store for us in season 3!