The Triumphant Return of Once Upon a Time? 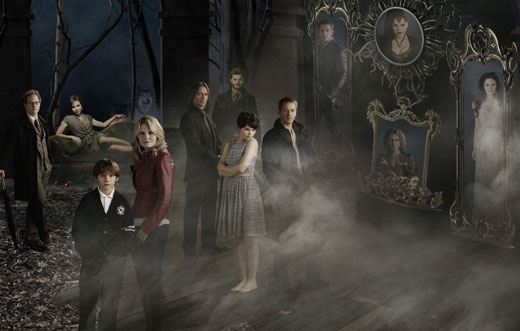 The ABC drama Once Upon a Time, which returns for its second season September 30 this year, made quite a big splash in the Science Fiction and Fantasy genres with its first season last year. I can tell you I myself was surprised by how much I found I enjoyed it.  I found it quite by accident, right after the pilot, in the recommended section for Grimm on Hulu Plus. As a lifelong (as in, before Batman Begins and the Avengers made it cool to be a nerd) science fiction and horror fan, I was a little hesitant to approach a show whose premise, on the surface, seemed to be “Lonely woman’s kid finds her. Oh, also magic sometimes.” Plus, my memories of ABC mostly consisted of groaning in the other room while my father watched Desperate Housewives and Grey’s Anatomy.

However, I gave the pilot a shot, and found myself, for lack of a better word, entranced. With Ginnifer Goodwin’s portrayal of the (usually) kind-hearted, amnesiac Snow White/ Mary-Margaret Blanchard; Jennifer Morrison’s iron-willed depiction of the down to earth Emma Swan; my absolute favorite, Robert Carlyle’s bipolar and twitchy role as the mercurial Rumplestiltskin, the role that kept me watching; to Josh Dallas’ chiseled and gallant Prince Charming/David Nolan, this series has some serious talent behind it. And it takes a lot of talent to play two different characters, bound together by a tenuous sense of identity. The characters, cursed to not remember their lives in the world of magic, struck a careful middle ground with their current and “true” identities. Motivations, actions, and personality traits melded together, informed but not overpowered or controlled by their previous lives. The show did a fantastic job balancing the potential campiness of fairy tale magic with a grounded reality of small town Maine. The question is: with magic coming to our world, can they continue that balance?

Some other big questions: Who else will we be seeing from imagination land this season? What does magic coming back mean for the characters in Storybrooke? Why didn’t they return to their own land? What about the other residents of Storybrooke whose magical origins we do not know about? Well thanks to previous interviews (not by me, sadly. Someday….) and Comic-Con panels, with executive producers Adam Horowitz and Edward Kitsis, we have at least the beginnings of some answers to several of these questions.

It was confirmed that we will definitely be seeing Sleeping Beauty this season. A welcome confirmation, but not a totally surprising announcement with the power house performance of Kristin Bauer van Straten (of recent True Blood fame) as Maleficent in season 1. Unless we see this story totally in magical flashbacks, this brings up the question of did Maleficent die when Emma blew her up in the season 1 finale? Another confirmed new face will be Jamie Chung debuting as the Chinese warrior princess, Mulan! In the teaser for season 2 from Comic-Con, we are shown Captain Hook breaking into Mr. Gold’s pawn shop to retrieve his hook. Disney princesses have been hinted at for seasons going forward, but nothing concrete on that front has been announced.

Viewers of season 1 won’t need to be reminded: All magic comes at a price! What does the arrival of magic mean for Storybrooke? Who is going to have to pay this price? Well, one price that has been confirmed is that now that magic has come to our world, Ruby will be turning into a wolf once a month when the moon is full!

As for why they did not return to their own land, Kitsis and Horowitz had this to say, “The question is: Is there even anything to go back to? How do we know anything exists?
Horowitz: All we saw at the end of the pilot was this horrible curse wreaking havoc and then they woke up in Storybrooke. So, what happened? Is there anything left there?”

For myself, I say, remember who wrote the Dark Curse: Rumplestilskin, a man who is never without a plan. He is obviously on a quest to find his missing son, Baelfire. For a few brief episodes we had a glimmer that this may have been his only goal, assigning him a new nobility. This hope was dashed when, even after he is reunited with his True Love, Belle, he brings magic forth because “Magic is power”

I for one cannot WAIT for season 2, and look forward to going on this journey into these questions.

Thanks so much for welcoming me to Three if By Space, and I hope you enjoyed this article!