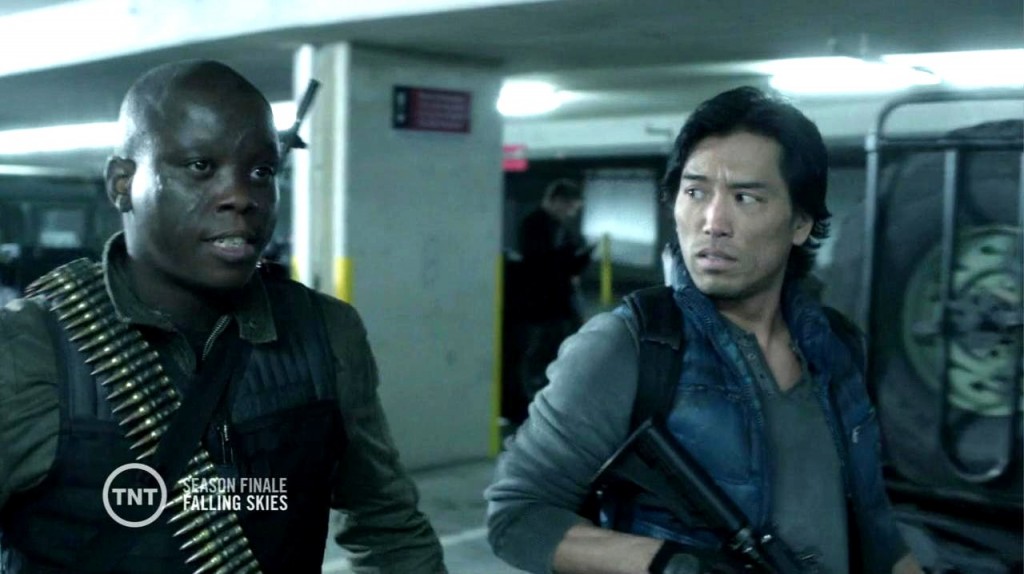 Sit back, relax, and grab some aluminum foil because it’s conspiracy time boys and girls!  Before we get started, take that foil and make it into a hat.  A really, really tight hat.  Personally, I like to make mine twisted and pointy on top so it looks like I have a giant Hershey’s Kiss for a brain which, sadly, would be an improvement.  The wife likes to make kitty ears on hers and my dog hates foil hats.  Claims it clashes with his collar.  Diva.

If we’re ready, I’d like to discuss some theories being bandied about by myself and fellow hackmeisters, Carrie and Matthew.  This, of course, concerns the sudden and rather dismissive death of everybody’s favorite silent warrior, Dai.

If you’re a fan of Falling Skies (And lets face it, why would you be reading this if you weren’t?) then you’re probably a fan of Dai, the Clint Eastwood of the 2nd Mass.  A man of few words and great action, Dai is the 2nd Mass’ ace in the hole.  He never questioned decisions and always got the job done.  Paired with Anthony they were the Blues Brothers of the resistance; two guys on a mission who could not be stopped by anything.

Anything except the writers it would seem…

As huge fans of the show, the three of us really don’t want to accept that Dai will remain dead.  Formed half from reason, half from emotion, the following is a collection of thoughts on why we would like to believe this fan favorite is coming back.  Of course if he is coming back everyone involved with the show is doing a bang-up job of keeping it under the table, but it’s possible.

First, unlike Jimmy we never got any closure on Dai’s demise.  There was no funeral, no burial and hardly a mention of his passing.  The conversation felt a lot like this:  “Captain Weaver, we’re running low on flour, Dai’s dead, and the bus has a flat.”  “What?!  We’re low on flour?  We gotta do something about that.”  Granted, I’m trying to convey a feeling and not even coming close to quoting the show, but you know what I mean.  Weren’t you at least a little insulted by the offhand way Dai’s death was handled?  We were incensed to say the least.  Even Redeye’s death was given more emotion and attention.

The people who make Falling Skies are smart cookies, so the only reason I can think of  for them to treat his death this way is because they have a way of making up for it in season three.  I mean, I can’t believe they’d leave angry fans seething for 10 months unless there was a really big payoff and the only payoff I can think of that would make up for this egregious circumstance would be to bring Dai back.  Nothing less would do.

So I’m sticking with “He’s just mostly dead.”  After huddling in a tight circle and rubbing our hands together in paranoid glee we’ve decided this new alien is going to be the Miracle Max to Dai’s Westley.  There’s plenty of precedent in damned near every other science fiction show, many of which have less in their universes to explain bringing someone back from the dead.

C’mon, we have a freshly dead favorite character plus buttloads of aliens with shiny gizmotastic doodads in a scifi setting.  There’s only one conclusion:  Number Five is alive!

It really wouldn’t take much would it?  The way Dai died was from being slammed into the metal wall of the weapon chamber.  He wasn’t blown to bits, burned to a crisp, decapitated, drawn and quartered, vaporized, skinned alive, shot full of holes, disemboweled, or otherwise damaged in any outward way.  He hit a wall and fell down.  Hell, I do that most mornings on my way to get coffee.  For all I know he was down there looking for a lost contact lens.

Not covered = Not dead

Another huge flag was raised in the scene where Tector and Anthony were carrying Dai back to the compound on a stretcher.  His head was uncovered.  Uncovered!  It’s a television staple to cover a character’s face when they die, especially when they’re already mostly covered with a sheet or blanket.  It’s in the same rule book as, “Nobody ever says, ‘goodbye’ at the end of a phone call” and “Always choose flashlight over light switch when entering a dark and potentially deadly room.”  Anyone who watches TV knows this stuff, right?

Finally, if Peter Shinkoda is really off the show then why wasn’t he at DragonCon soaking up the fan love?  Hmm…

Matthew pointed out that when Steve Jinks died last season on Warehouse 13 the news of his return was kept pretty well under wraps.  Granted I didn’t dig for clues that would point to misdirection, but I do spend way too much time both watching TV and reading about it on the internet.  If it was leaked or mentioned shortly after his on-screen death I didn’t see it, but you can bet I’ll be vigilant for clues that point to the same thing happening with Dai, well, hopefully with something more high-tech than a cursed metronome.

Who loves ya, baby?

We’ve all talked about what’s in store for season three and with the way Falling Skies has been going it’s really anybody’s guess, but the new aliens are all the rage at our foil hat tea parties.  The speculation seems to fall into a few categories with the hope being the New Aliens On The Block are going to be friendly to humanity, not so much to the Overlords.  There’s also the possibility the NAOTB are competitors for planetary dominance and want to kill both the Overlords and humans.  Finally, Carrie pointed out that perhaps the noobs will consider humans to be irrelevant and are only here to kill the Overlords as retribution for past invasions or uncalled for fly-by moonings.

And how about them eye bugs, people?  Just when you thought it was safe to take off the safety goggles Hal decides to go all like-father-like-son and squeeze out a tiny nightmare from his eye.  But that’s not enough for the feisty eldest Mason boy.  Not content with merely birthing an Eyeborg®, he’s got to show off and pull a Wrath of Khan, having the damned thing crawl into his ear.  Kids today…

Get this man a Q-Tip, stat!

Matthew has an interesting theory about Hal’s new in-ear BFF.  He thinks the little critter contains the consciousness of the Overlord who was killed by Tom.  Since it was revealed that the big guys keep everything in their heads instead of computers, this would keep the invaders’ plans from falling apart after biggie’s death at the hands of Tom and the ouch stick.  I like it.

After all the speculation is done, one thing is clear; Falling Skies will surprise us, engage us, thrill us, and scare us, but seldom disappoint us.  Well, except for killing Dai, but they’re going to fix that.