Revolution ‘Chained Heat’ Review and Recap: The Group Splits Up 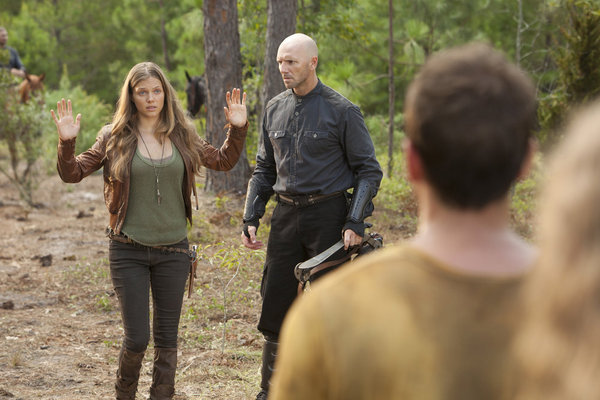 Hello and happy Monday! Today saw the premiere of an all new Revolution episode: Chained Heat. So in case you missed the gist of it, here’s a handy refresher!

Miles is up to  his usual tricks again: tangling with people who want him dead. After a fight with a bounty hunter, he and the others (Charlie, Aaron, and Maggie) head off in search of a woman named Nora Clayton (Daniella Alonso). We also see that Nate is still following the group. In his quest for Nora, who Miles believes can help rescue Danny, they are again ambushed by bounty hunters.

Later that night, having killed off the militia group trying to apprehend him, Miles decides to strike out on his own in search of the elusive woman. He gives instructions to meet him in two weeks and departs despite Charlie’s protests. Not content to let things be, she deliberately defies her uncle and hea 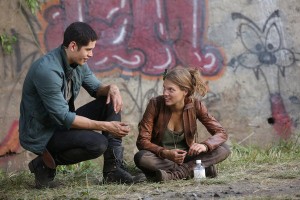 ds off after him while Aaron and Maggie sleep. On her way, she runs into Nate and tries to flee, only to fall down an embankment. Nate tries to help her but she handcuffs him to a post to facilitate her escape, clearly sore about the fact that he betrayed her and her friends. Continuing on her way, she eventuallycatches up to her uncle and vows to join him.

Elsewhere, Aaron shows Maggie the necklace that Ben gave to him in the pilot episode, revealing that his instructions were to find Grace Beaumont (the math teacher who hides Danny in the pilot) who apparently knows something about the blackout. They set out to find her. Aaron suggests his own theory for the power outage: a man-made cause. Is this true? Just speculation? It’ll no doubt feed into the fan theories of why this event even happened.

Out in the woods, Miles and Charlie come across a disabled military helicopte 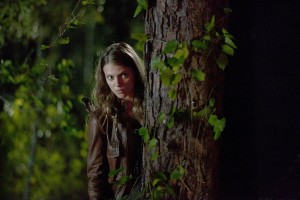 r being pulled along by a group of prisoners. Miles spots Nora in the group but realizes that the wardens are too well-equipped to deal with immediately. Under the cover of nightfall, the two cause a distraction to break a rather unwilling Nora out of her chains. She reveals that she was actually trying to steal one of the warden’s high-powered rifles and therefore allowed herself to be arrested. She insists on going back but Miles reminds her that the wardens know both of their faces. Charlie volunteers to kill the guard. Her uncle doubts her.

Much to everyone’s surprise, Charlie does in fact manage to kill the man and grab the gun. A series of flasbbacks reveal that her mother also killed a person after the blackout–a thief who threatened the family and stole their food. This may be why Charlie herself is so hesitant to take a life. In the ensuing fight, Nora is slashed in the abdomen (but survives). As she treats herself, Miles notices a tattoo on her shoulder blade that marks her as a member of the armed resistance against Monroe’s Republic.

Over at Grace’s house, a man appears at her door. We don’t see his face but whoever he is sends her into a panic. She transmits a message that simply reads “Randall is here” before he breaks down the door to her operations room. He is wearing a necklace like the one Ben gave to Aaron.

The end of the episode is where the major bombshell occurs, though. Charlie and Danny’s mother is still alive, despite numerous characters stating that she died. She is a prisoner of Monroe, who was hoping to gain knowledge about the power outage from her. He reveals that Danny is also his prisoner and demands that she tell him everything she knows.

So what did you think of tonight’s episode. I’ll be honest: parts of it were a bit dry but we’re still in an exposition phase here. And the action-packed ending made up for the parts in between. So what do you think caused the blackout? Who is Randall? Can Nora be trusted? Can Rachel (Charlie and Danny’s mother) be trusted? Weigh in with a comment and check back next Monday for more Revolution coverage!