Home » TV » TV News » What Can Science Fiction Viewers Look Forward to (and Avoid) this Fall?

What Can Science Fiction Viewers Look Forward to (and Avoid) this Fall? 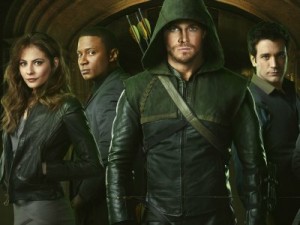 On the heels of my articles about proven performers like Once Upon a Time and Haven, I thought we would take a look at just a few of the science fiction newcomers for the fall lineup. With the recent successes of shows like Grimm, Alphas, Warehouse 13, and of course Falling Skies, it is a pretty good time to be a science fiction fan on TV these days. Now, be forewarned: I hate the Vampire Diaries, do not watch Supernatural (the TNT re-runs I have seen were good, but I never got into the show itself), I haven’t read the Hunger Games, and I hate Twilight. So, if those things are your must-see TV and movies, my recommendations may not be your cup of tea. Though, just to prove I am fair and balanced, I gave the new Teen Wolf on MTV a shot and really liked it.

Arrow (The CW): I am super excited for this adaptation of DC’s Green Arrow. Now, aside from Batman, and some versions of Superman, I am firmly on the Marvel side of Marvel vs. DC. But I like Green Arrow, and the things I’ve read don’t fill me with dread (in this TV climate, that is high praise). Casting news is a little thin on the ground considering this premiers October 10 this year, but we know some roles. Arrow will star Stephen Amell (Nick Harwell, Heartland; and Scott Becker, Private Practice) as Oliver Queen, the titular Green Arrow. It will also star Katie Cassidy (Gossip Girls, Melrose Place) as Queen’s girlfriend, Laurel Lance.

For those unfamiliar with the Green Arrow comics, some brief background: After a shipwreck, billionaire Oliver Queen is declared missing and presumed dead for five years. He then turns on a remote pacific island. Upon his return home to Starling City, he is welcomed home by his mother Moira, sister Thea (Willa Holland, Gossip Girls, The O.C.), and best friend Tommy. However, Oliver has been changed by his five year ordeal. Desperate to make up for his years as an intenerate playboy, he creates the alter-ego of Green Arrow to fight the evils of society, and restore Starling City to its former glory. However, his childhood girlfriend Laurel’s father, Detective Quentin Lance, is set on a quest to arrest the vigilante operating in his city. In addition, Oliver’s own mother, Moira, knows more about the deadly shipwreck than she has let on and hides secrets he can only guess at.

Arrow has the potential to pick up where NBC’s ill-fated The Cape dropped the ball. A chance, before the anticipated Marvel Universe Show, to show that comic book shows don’t have to be Lois and Clark, or be animated to be good.

Beauty and the Beast (The CW): Premiers October 11 this year. Pass.

OK, fine, I’ll explain myself. After viewing an extended trailer, this supposed remake of the show of the same name starring Ron Perlman just comes across as a Grimm rip off, and feels tired and done. Grimm is an amazing show, but how many supernatural police procedurals do we need? Starring Kristin Kreuk (Lana Lang, Smallville: and Laurel Yeung, Edgemont) as Catherine Chandler, an NYPD detective (Beauty); and Jay Ryan (Go Girls and Terra Nova) as Vincent Koslow (the Beast). Chandler’s mother is murdered under mysterious circumstances; an event Chandler blames herself for as her mother was helping her with car trouble, Chandler’s fate also seems sealed until she is rescued by a mysterious bestial figure in the woods. She is drawn into a world of scientific experiments and shadowy conspiracies as she meets her supposed hero, former generic soldier Vincent Koslow.

So there you have it folks. My two cents for now. Hopefully I will find some new shows to take a look at either for fall or farther ahead in the future.