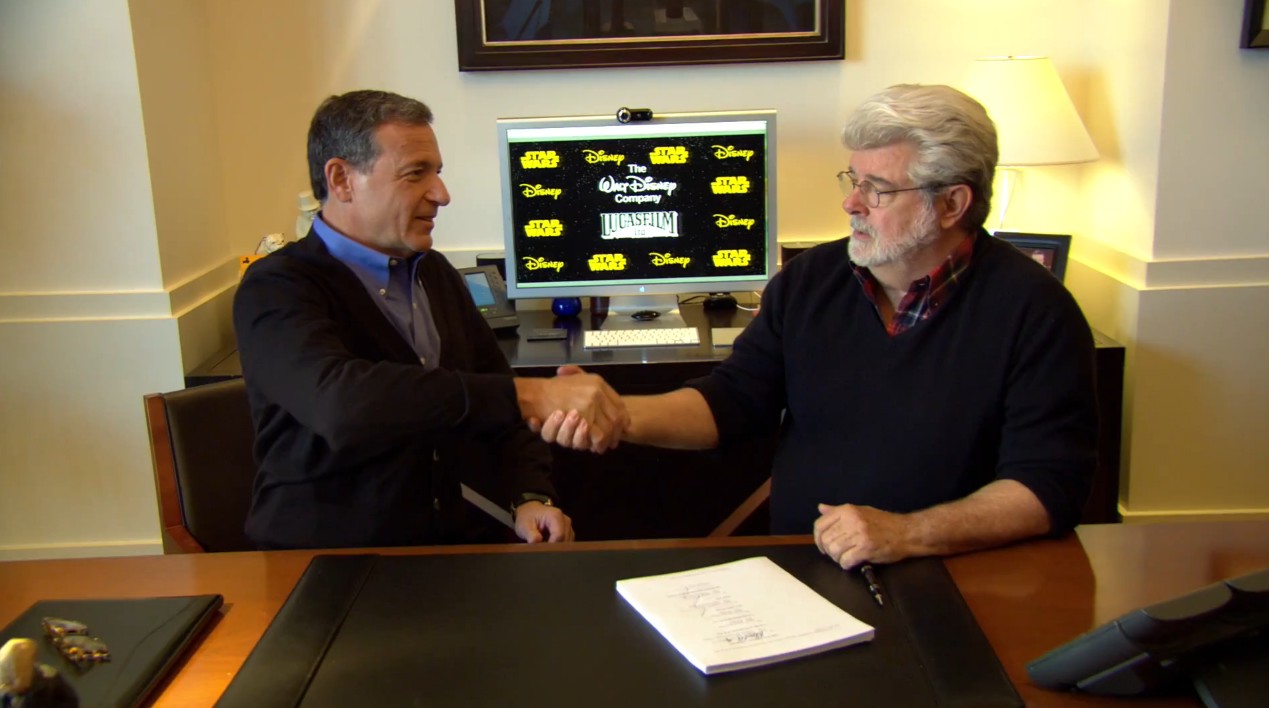 It was just announced this afternoon that The Walt Disney Company will acquire Lucasfilm Ltd. for approximately $4.05 billion dollars adding another huge property to Disney’s portfolio which already includes ESPN, Pixar, Marvel and ABC.  Also announced was Disney’s plans to begin work on the final trilogy of the Star Wars franchise with Star Wars: Episode 7 planned for a 2015 release.  Below are a few snippets from the very long press release followed by a video of both Bob Iger and George Lucas discussing the deal.

Burbank, CA and San Francisco, CA, October 30, 2012 – Continuing its strategy of delivering exceptional creative content to audiences around the world, The Walt Disney Company (NYSE: DIS) has agreed to acquire Lucasfilm Ltd. in a stock and cash transaction. Lucasfilm is 100% owned by Lucasfilm Chairman and Founder, George Lucas.

Under the terms of the agreement and based on the closing price of Disney stock on October 26, 2012, the transaction value is $4.05 billion, with Disney paying approximately half of the consideration in cash and issuing approximately 40 million shares at closing. The final consideration will be subject to customary post-closing balance sheet adjustments.

Disney chairman & CEO Bob Iger had this to say about the future of Star Wars:

Star Wars in particular is a strong global brand, and one of the greatest family entertainment franchises of all time, with hundreds of millions of fans around the globe. Its universe of more than 17,000 characters inhabiting several thousand planets spanning 20,000 years offers infinite inspiration and opportunities – and we’re already moving forward with plans to continue the epic Star Wars saga.

The last Star Wars movie release was 2005’s Revenge of the Sith – and we believe there’s substantial pent up demand. In 2015, we’re planning to release Star Wars Episode 7 – the first feature film under the “Disney-Lucasfilm” brand. That will be followed by Episodes 8 and 9 – and our long term plan is to release a new Star Wars feature film every two to three years. We’re very happy that George Lucas will be creative consultant on our new Star Wars films and that Kathleen Kennedy, the current Co-Chair of Lucasfilm, will executive produce. George handpicked Kathy earlier this year to lead Lucasfilm into the future. She’ll join Disney as President of Lucasfilm, reporting into Walt Disney Studios Chairman Alan Horn and integrating and building the Star Wars franchise across our company.

Here is a video of Iger and Lucas discussing the deal:

Disney.com – The official home page for all things Disney