Grimm Review – Over My Dead Body

A woman arrives in Portland via private plane and calls Captain Renard, and the two old friends – or more than friends? – arrange to meet. Meanwhile, Juliette has cooked dinner for her and Nick, wanting to try to make new memories, even if she never regains her old ones. We then see Monroe’s ex-girlfriend, Angelina, dancing with a man at a bar. She tells him that she’s not interested and leaves, but he follows her to the parking lot and tries to force himself on her. She hits him and he turns into a Skalengeck, a lizard-like creature, and she turns into a Blutbad and kills him. She’d just thrown his wallet and cell phone away when another man comes up to her and holds a gun on her. The man forces her into a parked van and she’s confronted by Arbok, a Konigschlange (a cobra-like Wesen), who tells her she has three options: they’ll kill her, they’ll call 911 and report the murder… or she can do the job that the man she killed was supposed to do, and she’ll even get paid $25,000. She takes the job and is told she has 24 hours to do it. 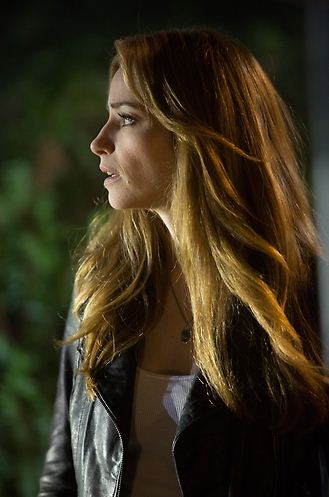 Back in Portland, Monroe and Rosalee, like Nick and Juliette, are having a romantic dinner and getting to know one another better. They’re just about to kiss when Angelina busts into Monroe’s house and tells him she needs to talk to him and Rosalee has to leave. Monroe protests but Rosalee leaves anyway, and that’s when Angelina tells him that she’s been hired to kill him. Monroe refuses to leave Portland and wants to call Nick, but Angelina reminds him that Nick wants her arrested for the Bauerschwein deaths. Finally, Monroe calls Nick, interrupting his conversation with Juliette – but once he hears that someone has put a hit out on Monroe, he agrees to head over to his place.

Nick and Angelina do confront each other once he arrives, but they finally agree to an uneasy truce so they can help Monroe. To keep him safe, Nick arranges for Monroe to stay with Hank for the night while he and Angelina head to the bar. Hank and Monroe share some drinks and get to talking, and Hank asks more questions about the Wesen world, even getting Monroe to morph for him.

After arriving at the bar, Nick and Angelina find a detective there. Angelina pretends to be Nick’s partner and ‘solves’ the entire crime in minutes, helping the detective find the man’s wallet while she pockets his cell phone. It turns out the dead man is well known to the detective as he’s been charged with rape and assault in the past. After they leave, they check out the cell phone and Nick arranges to get the name and address of the last call received, which Angelina knows was from Arbok. 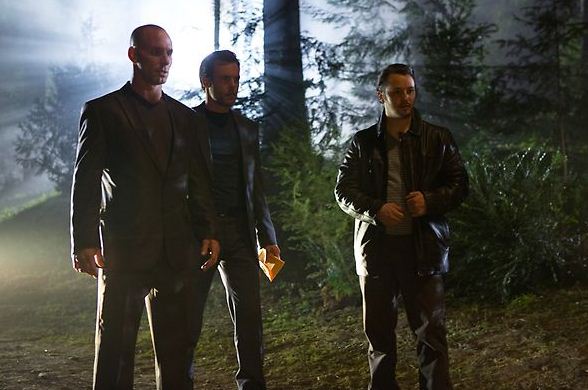 Using the information they get, they’re watching for Arbok when Angelina sees the other man who works for Arbok head into a store. Leaving both their phones connected, Angelina confronts the smaller man and threatens him so he’ll tell her why they want Monroe dead. He tells her that it comes from higher up than Arbok, but it’s because Monroe is friends with a Grimm. Someone wants to send a message to the Wesen community. Nick is very upset that this is happening because of him, and they head back to Hank’s, where Nick tells him that they have to work with Angelina. He also tells both Monroe and Hank why the hit has been put out on Monroe. 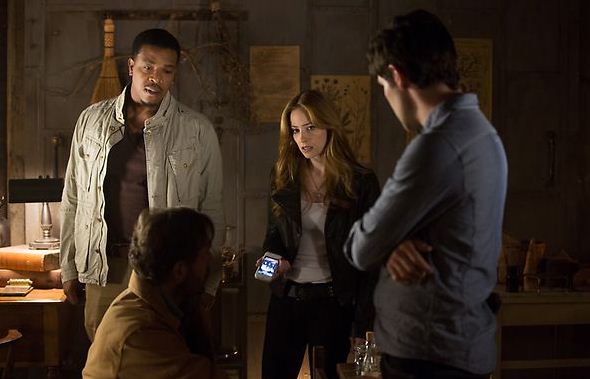 Monroe comes up with the idea of a Dead Faint potion, a drink that will paralyze one’s muscles and bring the drinker to a suspended death. Rosalee is on a bus to see her family because her aunt has had a stroke, but they call her for advice from the spice shop. She’s very upset about the idea and fears that Monroe won’t survive, but finally helps them to create it, telling them the signs to look for if he’s under too long and needs to be resuscitated. Angelina gets the call from Arbok and tells him that the deed is done. He tells her where to bring Monroe’s body. Monroe drinks the potion and does appear to die. 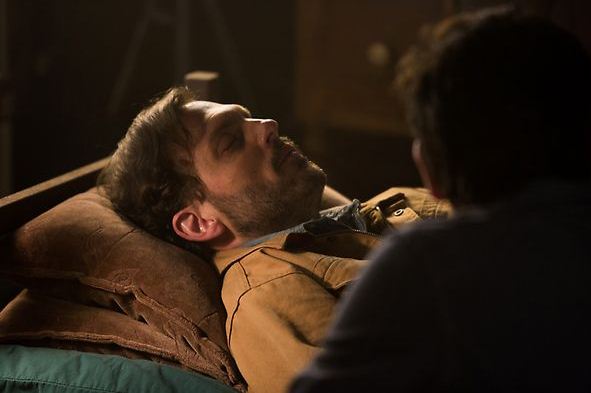 Angelina drives to the meeting place with Hank and Nick following out of sight. Arbok and his henchmen show up and Arbok morphs, sniffing Monroe to check if he’s actually dead. Once he’s sure, he calls his boss – who turns out to be the woman Renard was meeting. She instructs them that Angelina is to be paid. As she heads back to her car, Angelina notices the signs that mean Monroe’s been under too long and despite everyone seeing, she jumps on him and gives him mouth to mouth. He comes awake and all hell breaks loose. Hank and Nick join the fight, Angelina gets shot and the woman in charge drives off. Nick and Arbok are fighting in the forest and it’s looking like Nick’s about to lose when Hank shoots Arbok and saves him. Monroe is holding the dying Angelina, who whispers to him, “She got away. Be careful. Damn,” just before she passes in his arms. 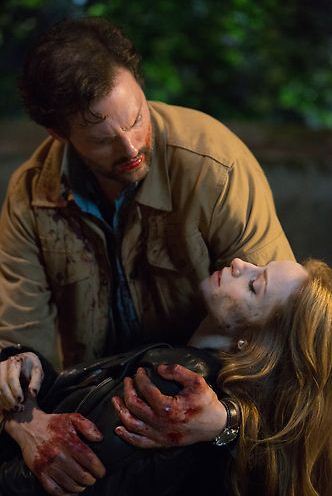 Renard is waiting for the woman at the airport. She asks if he’s going to kill her, and he tells her it depends on many things and demands to know everything. Nick calls Rosalee to let her know that Monroe’s all right, then finds a sweet note from Juliette. The final scene is of Monroe laying Angelina’s body to rest in the forest, and him howling his grief. 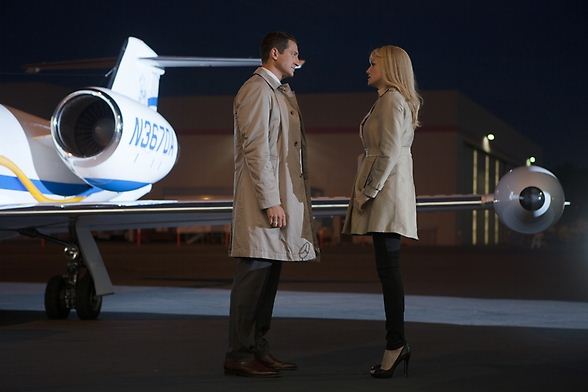 This was a fun episode with a good mix of plot and character focus. It was nice to see Juliette wanting to make an effort to get to know Nick all over again, and her note to him at the end – Thanks for the new memories. – was a good sign for their future. It was also great to see that Monroe and Rosalee were making progress, despite having their evening interrupted by Angelina. When Monroe was about to drink the potion, Rosalee very nearly tells him that she loves him, but he stops her – my guess is because Monroe is quite the romantic and he wanted it to happen at a better moment. But his tears as he ‘died’ after reassuring Rosalee that everything would be okay proved that he loves her, too – and I suspect things will be moving further along soon.

The drinking and bonding scene that Monroe and Hank had was brilliant, because it gave an infusion of humor and because it let us learn more about the Wesen world right along with Hank. We now know that morphing is called voolga, and that the Wesen can control when a human sees them, even though the change is brought on by various emotions – but Nick can see them change even if they don’t want to be seen. Which leads me to thinking about Renard, and now it makes perfect sense that we didn’t see him change until he took that potion – he was alone and his emotions were out of control. The majority of the time when we see Renard, he’s completely in control.

Speaking of Renard, I wonder if we’ll be hearing anything more from or about the mysterious woman who wanted Monroe dead. While she told Renard that she didn’t agree with how his family treats him, it certainly seems like she agrees with his family on some matters, specifically that the Grimm needs to be eliminated, one way or another.

One of my favorite characters is back next week! I knew she wasn’t gone forever. It’s going to be an interesting one – don’t miss it!