Revolution ‘Soul Train’ Review and Recap: All Aboard 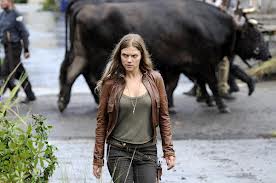 Hello and happy Monday everyone! As always, we’re back for another review/recap of NBC’s Revolution. This week’s episode was entitled ‘Soul Train’ and the action hardly stopped for a minute. So let’s recap:

We open with Captain Tom Neville beating up on Danny in some strange attempt to toughen him up. Danny isn’t able to hold his own very well but we are forced to wonder: what’s Neville’s getting at with him? Hot on the heels of Maggie’s emotional death last week, we now find Charlie and co. burying her before heading off in search of Danny. They hear a train whistle and are surprised to find a steam engine.

After a bit of snooping around, the group learns that the train is headed for Philadelphia, where the Monroe Republic’s capital is. Miles concludes that Danny will be aboard the engine. The train will be leaving by morning so it’s a race against the clock to find the boy, who Captain Neville is holding inside a bank vault. Through a series of flashbacks, we meet the ‘old’ Tom Neville, a mild-mannered insurance agent and his family, specifically son Jason. 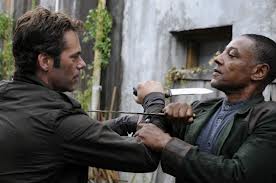 The group splits up in search of the lost Danny. Nora enters a bookshop and meets a fellow rebel named Hutch. The two plot to blow up the train to kill the officers on board. Charlie, meanwhile, encounters Neville. She claims to be spying on a cheating boyfriend to get out of the confrontation and proceeds to follow him. He catches her and is prepared to kill her until Miles intervenes. The two at it but when Neville’s militia reinforcements arrive, Miles flees back to the auto repair shop where the group is hiding out.

Nora and Hutch begin building the bomb, with Nora hoping against hope that Miles will get Danny out of harm’s way before the explosive detonates. The device is hidden inside a hollowed-out log, the idea being that when the driver puts the log into the furnace to fuel the train, the gunpowder inside will explode. Charlie, meanwhile, interrogates Nate for info on where her brother may be. The militia spy is stubbornly silent but when Miles moves in on him, he manages to escape the makeshift holding cell.

Neville, now aware that the group is onto him thanks to Nate, moves up his plans and has the train depart immediately. Nora realizes that the bomb will detonate with Danny aboard and moves to get the bomb off. Hutch, however, has become impassioned with the rebel cause and stabs the woman in the abdomen to keep her from foiling the plan. At this point, most viewers are likely suspecting that the writers played a game of ‘how many female leads can we kill off before season’s end?’ when scripting the show.

In desperation, Miles and Charlie go cowboy, stealing horses and chasing down the train. While Miles goes off to remove the bomb, Charlie goes in to save her brother. The bomb, however, is already inside the furnace and Miles fights off the driver before going in to retrieve the now flaming explosive. Danny, meanwhile, spots his sister and decides to jump Neville to help her out. As the two grapple, Charlie bursts in to assist but ends up being choked by the militia captain. Danny then breaks a glass bottle over the captain’s head to rescue his rescuer. Things go awry, though, when Nate shows up and grabs Charlie. This gives Neville a chance to recapture Danny. The captain orders Nate to hand Miss Matheson over but he defies the command, instead hurling Charlie clear of the train to safety. Miles, meanwhile, has pitched the bomb overboard and it detonates harmlessly by the roadside.

Angry over losing the second Matheson, Neville contents himself with cuffing Danny to a seat and glowering silently and disapprovingly at Nate. Charlie and Miles rendezvous with Aaron and surprise! Nora is still alive and well! It takes more than just a few stab wounds to kill her! Charlie is now angry and bitter about losing Danny after being so close to saving him. This new grim, determined version of our heroine leads the group on to Philadelphia, bent on getting her brother back.

In Philly, the train has arrived. We learn that surprise (again)! Nate is actually named Jason and he is Captain Neville’s son! Remember a few weeks back when he told Charlie that ‘Nate’ wasn’t his real name? There you go. In a final scene, Monroe and Rachel watch Danny get led off by the militia. Desperate, the wom 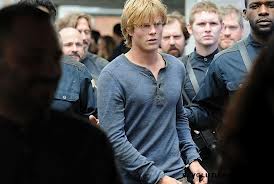 an agrees to reveal what she knows. She and Ben were working on a way to restore power together. She shows Monroe the pendant design and says there are twelve. The necklaces, she claims, are the key to restoring power.

This week marked several drastic changes in the course of the show. Charlie, who was previously very naive and idealistic (sometimes annoyingly so) now seems very focused on doing whatever is necessary to get her brother back, taking charge of the group with a ferocity we have not yet seen from her. Also, we’ve learned Nate’s true identity and how his feelings for Charlie may eventually put him in a bind. Lastly, we now know that Rachel is more hip to the secret of the blackout than we originally thought, which may explain why Monroe wants her alive. Although I personally feel last week’s episode was still emotionally stronger, ‘Soul Train’ continues to take Revoluton down the right track (if you’ll pardon the pun)!

So what did you think of tonight’s episode? Stronger than last week’s? What about the latest revelations? Did you see them coming or were you surprised? Weigh in down below with a comment! Revolution will be back in two weeks, that’s October 22, 2012 at 10/9C on NBC. And although it was reported that the show was already picked up for a second season, this is still unconfirmed. Check back for updates on that. ‘Til next episode!