Revolution ‘The Plague Dogs’ Review and Recap: Lose One

Before I get into the recap portion of this week’s episode of Revolution entitled ‘The Plague Dogs,’ let me just say that this episode was–for me anyway–the strongest episode yet. The past few weeks, while action-packed, sort of muddled through character development and at times seemed very weak. That all changed, however, when the writers decided to build up their characters a bit more. Be warned, however, that this new-found emotional connection to nearly everyone comes at the cost of a major character. That’s right, we lost one this week. So in case you missed it, need a refresher, or otherwise want spoilers, let’s recap.

The episode opens with Charlie being pursued for swiping rations from a militia man. This turns out to be a ruse set up by Miles and Nora, who want to question the guy. Terrified, the militia man confesses that Captain Neville and Danny–Charlie’s imprisoned brother–came through the area a day ago. Realizing they are close to rescuing him, the three hasten to meet up with Aaron and Maggie. Aaron, in the meantime, is instructing Maggie not to mention the abilities of the pendant Ben handed to him, citing Ben’s secrecy as reason not to reveal its power–the ability to restore power–to the others. When Charlie, Miles, and Nora catch up to the group, they decide to head off in pursuit of Danny. This changes, however, when a pack of seemingly feral dogs attacks and chases them. One gets Aaron by the leg and Maggie shoots it with a crossbow.

Meanwhile, Captain Neville and his militia, with Danny in tow, find themselves caught in a growing storm. Danny recognizes the signs of a tornado and warns Neville that they must stop, delaying the convoy in the process. Begrudgingly, Neville orders them to take shelter inside a barn. As they hasten to board themselves up, Danny takes advantage of the opportunity to escape. Neville recaptures him shortly and, with the tornado looming over them, is forced take the boy and hide out in a storm cellar.

Back with Charlie and company, Miles informs Nora that he plans to leave the group. Nora is disgusted with his selfishness and becomes increasingly angry with him. Charlie overhears and is visibly betrayed by her uncle’s harsh words. The pack of dogs return, forcing the five to run for cover at an abandoned theme park. The dogs are revealed to be under the control of a human being.

Inside the theme park, Nate is seen stalking the group once more. Miles spots him and ambushes him before Charlie intervenes and takes the militia spy as a prisoner. In an emotional sequence, Maggie tells Miles her backstory in a desperate attempt to get him to stay. She tells of her desperate attempts to get back to the UK to find her two sons. Unable to do this, she nearly gives up until Ben Matheson (Charlie and Danny’s dad) stumbles across her and takes her in, eventually falling in love with her. The moment is shattered when the pack of dogs return. The group runs for a nearby diner. 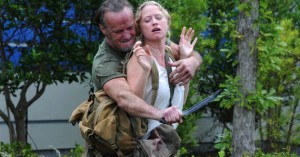 Inside, Charlie realizes that Maggie is no longer with them. She has been captured by the dogs’ owner, who stabs her in the leg as revenge for killing one of his dogs. She manages to stumble into the diner but is bleeding out, her artery having been severed. Miles and Nora go in search of the man while Charlie and Aaron prepare to stitch Maggie up. As Charlie rummages for supplies, however, she is grabbed by the mysterious assailant. Miles frees Nate to help look for the girl while Aaron and Nora tend to the gravely wounded Maggie.

In the storm cellar, the tornado causes the ceiling to collapse atop Neville. Danny is visibly torn over saving his captor or fleeing, but ultimately decides to assist the militia captain in an attempt to emulate his father. Neville repays him by betraying and recapturing him, much to the boy’s dismay.

Nate and Miles find Charlie’s captor when he tries to ambush them. Nate kills him and the two rescue Charlie after a narrow brush with death. They return to the diner to find that Maggie has been patched up but has lost too much blood. In the most emotional scene Revolution has offered us to date, the others are forced to watch as Maggie weakens. The woman recalls a moment she spent reading to her children and finally dies. Charlie breaks down, with Aaron, Nate, Nora, and Miles visibly saddened. Maggie’s death, however, persuades Miles to stay by his niece’s side. 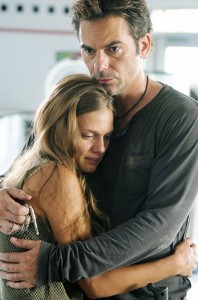 All-in-all, Revolution turned in a strong performance this week. The acting was more real and emotionally relatable. Tragically, a large part of this stems from Maggie’s death, which no doubt surprised many as shows rarely kill off major characters this early in a season. Although there were fewer action sequences this week, I personally feel this was the direction the show needed. Revolution just got picked up for a full-season run and second season, too, and if each week continues to build on this past episode then I think we can look forward to more great things. What did you think of this week’s episode? Do you prefer the emotional character-building or did you prefer the more action-packed episodes of past weeks? Weigh in with a comment and don’t forget to watchRevolutionevery Monday at 10/9C on NBC! ‘Til next week!