Another week of Supernatural has come and gone and this week’s whirled by in a ball of awesomeness.  In the time of movies such as Paranormal Activity more and more “scary” and “horror” movies are filming in the same manner and it seems that Supernatural will not be left behind. 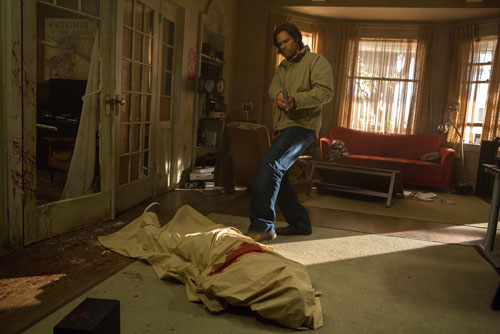 Soft , sappy music fills our ears as we gaze upon the interior of a house.  Blood is spattered everywhere and as our imaginations take over when the front door opens and in walks our boys with their guns ready to go.  Like professionals Dean clears the house while Sam enters the living room of death.  Dean announces that the house is clear and Sam tells him there is no ID on the person under the sheet and he has no idea who is painted on the wall.  That is when they notice the laptop with a note that says “Play Me” on it.  When the play button is hit “This should never have ended this way” flashes on the screen.  (My oh My!!  What do our boys have in store for us this week?)

It appears that we are going to be witnessing this episode from the perspective of college student’s Brian and Michael through the view of their video cameras.  (This could be a great episode.) In the beginning it is just typical stuff such as how Michael meets Kate and they hook up, the three of them becoming friends, sharing what their five year goals are and Brian shooting a lecture on the “Lord of the Flies” for Michael as he sleeps through it. 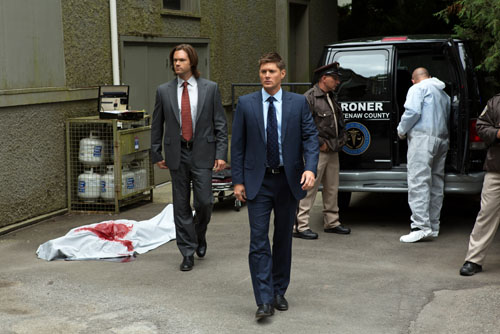 Everything changes when they come across a crime scene.  One of the student’s has been killed on campus and the Winchesters, donned as FBI agents, are caught on their video.  That night Brian and Michael go out to shoot some crazy “Jack-Ass” kind of stunts for Brian’s movie and they catch one of the big-men on campus getting rejected by a girl.  Running from the guy they get separated and Michael is attacked and bitten by something.  Brian finds him freaked out, in pain and covered in blood, but by the time he gets him home the wound is completely healed.

The doctor tells them he will be fine, but it is soon learned that Michael has developed super strength and it is fun to imagine that now he is a super hero.  Brian, who has it in his mind that the he is Piggy from “Lord of the Flies”, wants to find the creature that bit Michael and have it bite him too so he can be a super hero as well, but Michael discourages it.

The Winchester’s investigation leads them to the student’s house and after they briefly speak to Brain at the door, Michael video’s them through the window where they mention they might be dealing with another Mayan God.   (Oh boy first he thinks he is a super hero and now a God.  I’m sorry to tell you my dear it isn’t something so fantastic as that.)  That night he watches himself morph into something with sharp claws, big teeth and a hunger that won’t quit.  (See Dude I told you.)

After eating everything in the house Michael goes out to get some food and runs into Scott; the popular guy they had ran from the night Michael got bit.  When Scott starts talking smack about Kate the beast within Michael takes over and poor Scott is killed.  He is shredded and his heart is found half eaten.

Trying desperately to find out what is going on the kids put Dean and Sam under surveillance and find out that Michael is a werewolf as well as learn about  “Pure Blood” werewolves; who can change any time, not just during the lunar cycle, and can control from eating human hearts by living on animal hearts.

Brain become more determined than ever to become a werewolf and during a review of the tapes he finds a clue as to who the alpha is and goes to confront the professor who has been doing the lecture on the “Lord of the Flies”.  After some threats the professor breaks down and confessing that he “fell off the wagon” when he killed the young man and ate his heart and that he bit Michael to take the fall for him when the hunters came looking.  Brian gets him to bit him and soon after he leaves the Winchester’s show up to take out the professor and finds the camera Brian left behind.

Brian arrives home all powerful and proud now that he isn’t “Piggy” anymore.  When the truth finally comes out, which is he is in love with Kate, he and Michael get into a pissing match and Brain kills Michael and bites Kate.  After Kate completes the change she gains some clarity and acceptance as to what has happened and kills Brain, covers Michael’s body and leaves before the Winchester’s track the camera and show up. 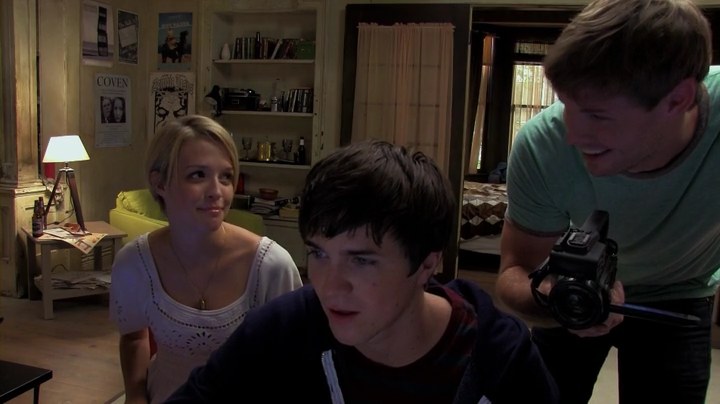 She is the one who has left the video for the Winchester’s.  At the end of the story aka video she express how much of a tragedy it was for the three of them and begs for the Winchester’s to give her a chance to keep her hunger in check by not killing humans but living off animal hearts.

Deep in thought (You can just tell that he is thinking about Purgatory) Dean agrees with Sam when he suggests that they give her a chance, but if she resurfaces and kills a human they will take her out.

Once again Supernatural was amazing.  Even though we only saw our boys a few times and the focus wasn’t on them I personally thought this has been the best  episodes so far this season.  Looking at the boys from this perspective was very odd for me, because I love living in their angst filled world, but the three young actors made it worth the loss of the brother focus.  It was well filmed, acted and I could actually stand seeing more episodes like this.

So who has two thumbs and is looking forward to next week?  This gal….and here is a clip from that anticipated episode: