This week the show opened with a caption at the bottom of the screen; Minneapolis, Minnesota and I have to admit that I might have squealed just slightly. This is because I live in a suburb of Minneapolis. I just knew this couldn’t be a bad episode and I was right.

A young man is jogging at night in a park. (Okay first of all I’m not sure many people would really be out jogging at night in Minneapolis, but whatever it makes for good T.V.)  He is surpassed by another jogger wearing bright red and who is just slightly overweight. (Already we have questions, right?) Catching up to the man doesn’t seem to be in the joggers best interest because their encounter leads to his death when speedy rips his heart from his chest. (Let’s just say..jaw…on..floor….what??!!) 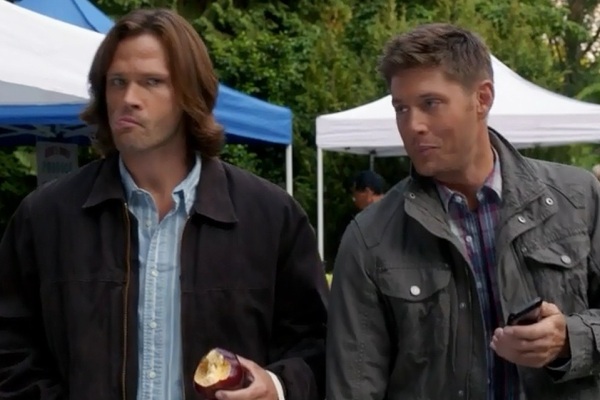 Sam grabs a bright red apple and takes a large bite, they are at a Farmers Market, as Dean browses his phone (Wait when did Dean get a smart phone?  He has always just had his  little flip phone while Sam has the fancy electronics) for news.  Reading about our dearly departed jogger, Dean gets excited about the case, but Sam’s heart isn’t into it and reiterates that he is only on board to find Kevin.  When Dean questions their whereabouts Sam tries to convince him that while he was gone he (Sam) took the time to enjoy the little things like organic foods.  They seem to agree to disagree for the time being when Dean reminds Sam that they just can’t ignore the kills while looking for Kevin.

In Minneapolis they learn that the cops don’t really have much to go on.  Even the murder six months prior is cold, but they have red jogger, who’s name we learn is Paul Hayes, on tape but they are sure he didn’t have anything to do with the kill because he doesn’t even have a parking ticket on file and he said he passed the dead jogger, but never talked to him.  Of course the boys can’t pass on the lead and during their interview with Paul they find out he had a health scare a year prior and now treats his body with health foods and exercise; expressing that his body is a temple that he worships at every day.

The trail leads the boys to Ames, Iowa when another heart is ripped out of someone’s chest.  This time the culprit, a cop named Arthur Swenson, was found out of his mind by the body.  He was repeating over and over some strange phrase.  Trying to figure out what language Arthur is speaking Dean announces that he purchased a translator app.  (What?  This is just so unnatural. What has happened to our Dean?) However, said app was not useful because the language was still not recognize, and later found out it was  dead language.  Poor Arthur, crazy out of his mind, breaks a piece off his jail bed (Yowza that is some strength) and gauges out one of his eyes.  The same eye the boys find out that he had transplanted a year before.  Research leads them to discovering that Paul Hayes also had a transplant around the same time and both organs came from the same man, a celebrity athlete, Brick Holmes.  Sam also discovers that the rantings of Arthur could be connected to a Mayan God (Please don’t ask me to try and spell said name). 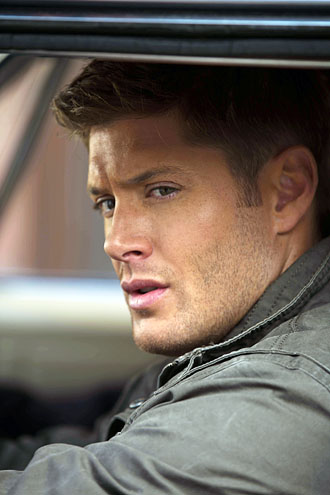 Interviewing Brick’s mother, snooping around his house and more research the boys discover that Brick wasn’t quite who he said he was nor was his “mom” Eleanor.  Brick was once a Mayan Warrior who wanted to be young and strong forever so he made a deal with the Mayan God, the one that I can’t spell, to be just that. Over the years he had become different persona’s, but always an athlete of some kind.  The catch to his eternal youth was a human sacrifice twice a year.  Eleanor turns out to be Brick’s wife not his mother and she didn’t know about the killings until she was aging and Brick wasn’t.  She informed the boys that the way to stop the sacrifices isn’t by killing everyone who got a piece of Brick, but to destroy the heart. 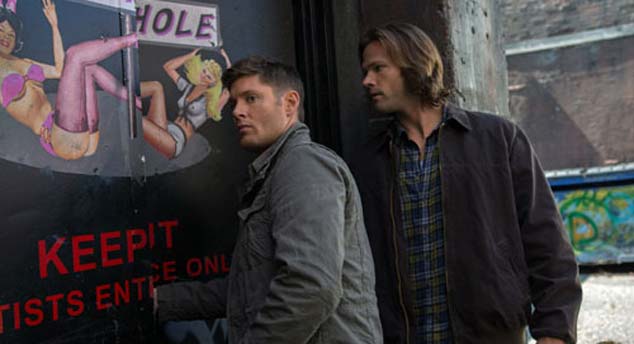 The recipient of the heart was a woman name Rhanda, who just a year ago was a meek and mild lady from the south, but once she received the heart of the warrior she gained strength and became a stripper.  (What??!! You have all that power and might and what do you do with it? You become a stipper??  Um….makes sense I think.) The boys head over to the Bunny Hole and when they walk in Dean gets this goofy look on his face and says to Sam, “Smell that?”  Sammy bites back with, “You’re gross.” and we fans get our own goofy grin.

Rhanda knew that Eleanor gave her up and she, along with Paul and another recipient of Brick’s organs, make their themselves known.  A fight breaks out and just when we think that Rhanda has the drop on Dean, Sam is able to distract her long enough for Dean to stick a knife through her heart killing all the recipients of Brick’s organs and saving the day once again.  (Come on you know this is why we love the show.)

The show concludes with  Dean being on a high from the hunt but Sam just wanting to find Kevin so he can give up hunting for good.  Dean doesn’t believe his brother, stating that Sam will eventually change his mind, but we get a good look into Sam’s mind and all he is thinking about is Amelia, the Vet, and how she threw him a picnic lunch for his birthday.  Something he has never had before in his life….normalcy.

I have to say this week’s episode kept me on my toes and I thoroughly enjoyed it.  So far the writers, directors, and actors aren’t letting me down during this 8th season!  However, the slight change in the brother’s dynamics is making me a bit crazy, but at the same time it pulls me in each week to find out just how it will play out.  The only thing I’m not liking about this season is Sam wanting to give it all up.  I’m not liking what they are hinting at and I hope at some point this gets changed around.

Well until next time my Wayward Sons (and daughters) I will leave you with this snippet for next weeks show “Bitten”: