Wednesday was the kick off for Season 8 of Supernatural and I for one had been biting at the bit ever since the finale of season 7 to know what happened.  I wanted to know how Dean survives in Purgatory and how Sam, well, just survived without his big brother and Bobby.

The premier didn’t let me down, but I’m not sure all my questions have been answered, and frankly I’m okay with that, because we know that during this season it will all come together. 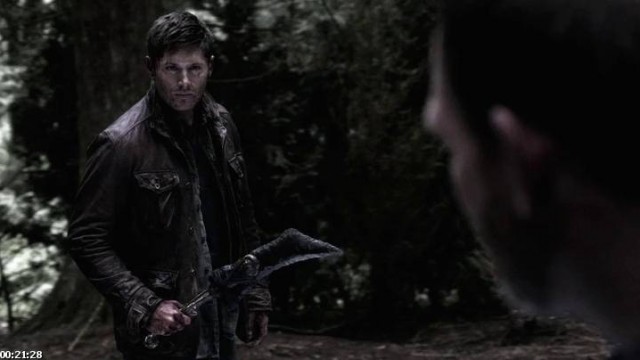 The show opened up with a young couple out camping and Dean showing up out of nowhere looking feral, dirty and on a mission.  He was fully armed and ready to take on anyone.  We follow him as he journeys to a windmill where he digs up some bones and brings “something” back from the dead.  Who is the Benny and Oh my his teeth are scary.  What on earth happened to Dean in Purgatory?  Joining alliances with the big bad?

We find Sammy in Kermit, Texas…Kermit, Texas really?  With baited breath we watch him sigh’s heavily, pet a dog at the end of a bed and leave a sleeping woman all this with the saddest expression known to man on his face.  Who is this woman?  Is this something serious and more importantly that dog is so very cute. 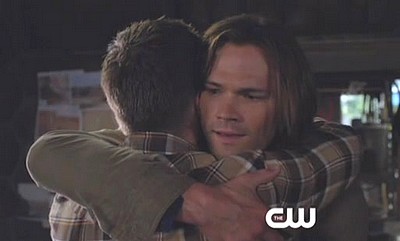 Dean lunges at Sam as he walks through the door of Bobby’s Montana cabin and tests him for all signs that he may not be Sam.   I couldn’t help but laugh when Dean wanted Sam to test him back.  Sam refused annoying Dean enough to do it himself.   Great stuff.   Then when Sam said he didn’t know if he should hug Dean or take a shower. Classic stuff I tell ya.  The brothers try to catch up and we find out that Cas didn’t make it out of Purgatory and according to Dean he died.  The most shocking thing comes to light when Sam tells Dean that he doesn’t hunt anymore and that he never looked for Dean once he disappeared and Crowley took Kevin Tran.  What??!!??  How does that happen?  Even when Dean went to Hell Sam still hunted.  Things sure do change.

Dean gets back into the swing of things and finds out that Kevin escaped from Crowley and that he had been trying to contact Sam for the past year.  This, of course, causes friction between the brothers.  Come on admit it you know as well as I do we love that part of the show.  The friction is part of what makes the boys their great selves.

Now with a newly found “mission” in front of them they head out to find Kevin.  Back in action the boys suit up to interview Kevin’s high school girlfriend.  She convinces them that she hasn’t seen him and that in fact she hates him.  When they leave her dorm we find out she is a Demon and she contacts Crowley. Of course….we sure have missed the badie  we love to hate.

The boys find Kevin hiding out in an abandon church, very smart Kevin, there he tells Dean and Sam that God told him how to escape from Crowley through another tablet and he also learned of a way to send all demons back to hell and shut them away from earth forever.

Of course Crowley shows up, with demon Lisa, and weasels Kevin into agreeing to go with them, but with his newly found tricks Kevin outsmarted Crowley and he, Dean and Sam were able to get away.  However, poor Lisa wasn’t so lucky and now the brothers are stuck with a depressed prophet as they search for the tablet that tells them how to get rid of the demons.

During the show we learn some of the things that happened over the past year though flashbacks from both Sam and Dean. Sam had met Amelia when he hit a dog, guess that explains the dog we saw in the beginning, and she challenged him into taking the dog and caring for it.  It seems that Dean may have enjoy Purgatory.  Can that be true?  It sure seems so.    Was it based on his time in hell or just for the love of hunting the big bad?  We also see him with Benny, yes the guy he resurrected, striking a deal to escape Purgatory.

Overall I loved the season premier and I’m eager to see what the season brings us.  With all these new questions about Purgatory, Benny, Cas, Amelia and more this season promises to be in true Supernatural form, exciting, funny, dark and the show we all love and tune into every week.

Until next time my Supernatural friends enjoy this clip for next week and …Carry on My Wayward Sons!!