Another episode of Supernatural has come and gone and personally I didn’t feel our boys disappointed at all. 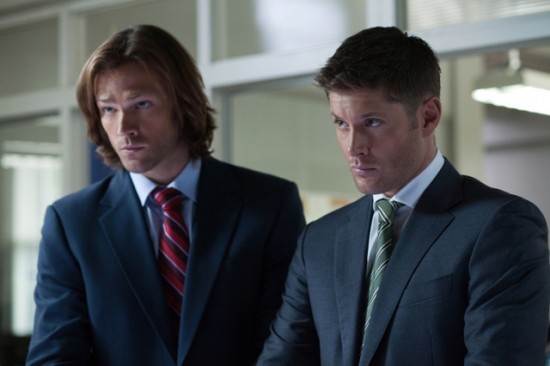 This week started with an old man wanting access to his safe deposit box.  As he opens the box we see an odd item that emits a pretty blue smoke when he picks it up.  The clerk asks him if it is a bone and he replies with, “Not just a bone, but a very special bone.”  She gives him a clerkly smile and tells him she is glad they could take care if it for him and asked if there was anything else she could help him with.  He smiles at her and says that he’d like to make a withdrawal.  Her face goes into shock, we hear a scream and blood spatters along the wall of safety deposit boxes.  All this in the first three seconds of the show….you know it is going to be a good one.

“Are you kidding me?”  We are presented with Dean eating a burger (Oh how I have missed Dean and his burger scenes) arguing with Kevin.  Kevin is still brooding about the fact that his girlfriend, Channing, was killed by Crowley and wants to go and check on his mom.  Dean is adamant against it, stating that they have Crowley by the short and curlies (Love Dean’s way of talking…makes me giggle) and they need to get to the tablet so they can send Crowley and his gang back to hell forever.  Sam tells Kevin that his mom is fine, but then also tells Dean that Kevin is right to worry about her.   (When did you get so wishy washy Sammy?)  Finally Dean consents and they find themselves outside of Kevin’s house.

Ensuring that it is safe for Kevin they take out the demons around the house including the mailman and the gardener.   Finally they ring the bell and Mrs. Tran opens it to see her son.  We are promised a heartbreaking reunion when the music turns sappy and she begins to sob, but as she leans forward to hug her son Sam and Dean throw holy water on her giving us a giggle and ensuring that she isn’t a demon.  Sam smells something funny and he and Dean rush into the kitchen to see a Demon trying to leave Eunice, Mrs. Tran’s friend, but Sam does a reverse exorcism and Dean takes Eunice out.  (Where on earth did Sam learn how to do that?  We know he hasn’t been hunting for a year and he has never done that before.)

Getting the recap of what has happened over the past year she is surprisingly okay with the fact that her son is a prophet of the Lord, but she doesn’t like that he is being hunted and states that she is going with them to protect her son.  Sam and Dean put stipulations on the Trans and we see them in a tattoo parlor getting protected against possession. 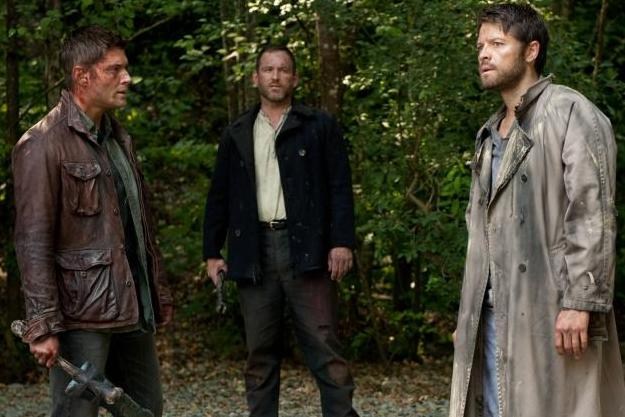 Coming up empty handed when they find out the locker, where Kevin hid the tablet, has been robbed the boys donned suits and headed to County to interrogate the thief.  During the interview Dean has a flash back to Purgatory where he and Benny  questioned a monster on the whereabouts of Cas.  Dean’s new found bad-assness kicks in and after the beast tells him where Cas is hiding out he kills him.  During the interview Dean gets creative with his interrogation techniques and finds out the tablet was sold to a pawn shop.  There they find out the tablet is with the help of Mrs. Tran.

At the address where the tablet is suppose to be they meet a curious man who knows all of them.  He presents Kevin with an invitation to a special action where the “Word of God” is going to be auctioned off.  This man is the right hand of Ploutos, the God of Greed.  He agrees to allow them all to go and disappears.  The small group try to figure out what they have of value to auction and Sam hints the impala.  Dean gets all defense and stands between Sam and his car.  Sam, who is knowledgeable in how auctions work comes up a with a sold plan to just get Kevin near the tablet before the bidding to memorize it.  (So funny when Dean turned to the impala and said,  “He didn’t mean it baby.” ) 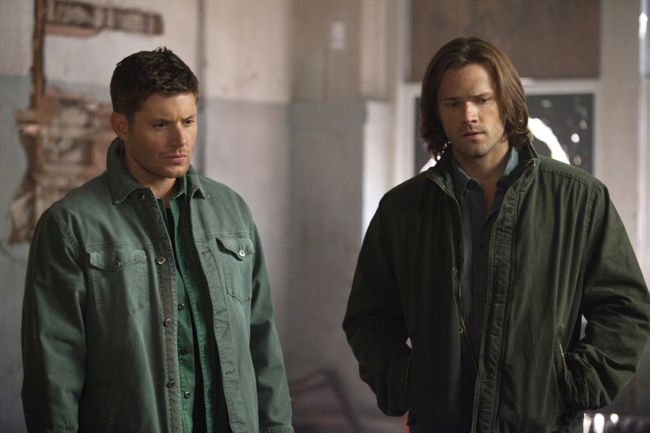 At the auction “Plan A” is a thwarted when they find a metal plate over the words written on the tablet and Crowley shows up uttering his famous phrase, “Hello boys.”  Right before the bidding begins Dean is greeted by an angel claiming to be a friend of Cas’.  His host is a burger boy named Alfie and during his inquiry about Cas Dean has a flashback of Purgatory where he and Cas are reunited in Purgatory.  Cas quickly pushes him away telling him he had to run away and keep one step ahead of the monsters that are out to kill him in order to keep Dean safe.  Cas wants Dean to leave and in true Dean form he tells Cas he isn’t leaving him and the memory fades with Cas telling Dean he understands.  “Plan B” is put into action and roughly $2000.00 is pooled in money, credit cards and a Costco membership,  but when they hear the first item go up for 3 Dwarven gold they have to come up with a “Plan C”.  “Plan C” is also a failure when Dean tries to steal the currency.  Finally when Ploutos takes Kevin and offers him up as part of a set with the tablet Mrs. Tran offers the most valuable thing in the place and that is her soul.

As she waits for her soul to be taken “Alfie” greats her asking her to allow the angles to protect Kevin and she declines.

She is presented to Ploutos, but Surprise it isn’t Mrs. Tran at all, but Crowley.  Ploutos’ funny little right hand man was swayed by Crowley into betraying his boss.  A fight breaks out where Ploutos is killed by his helper, Sam kills him with what I believe is the Hammer of Thor and despite Dean’s best attempts Crowley gets away with the tablet, but not before giving us viewers something more to think about.  He states that if Kevin only knew who his real father was…well it is scandalous.  (What???!!!)

Kevin isn’t happy with the fact that Dean tried to kill his mom, even though it was their best way to get Crowley out of the picture, and he takes his mom and slips away.  Leaving a note that indicates that since they lost the tablet he isn’t needed anymore and those who Dean doesn’t need any more end up dead.  Sam tries to make Dean feel better by telling him that isn’t true and we are left with a memory from Dean’s time in Purgatory where Cas is in trouble and calling for Dean’s help.

Gosh what an episode!!  It was chalked full of vintage Supernatural stuff as well as great dynamic changes between the brothers.  It  was funny, full of angst and left me with a lot more questions.  I for one loved every minute of What’s Up, Tiger Mommy?

I will leave you with a little sneak for next week: