Revolution ‘Nobody’s Fault But Mine’ Review and Recap: Unlimited Power 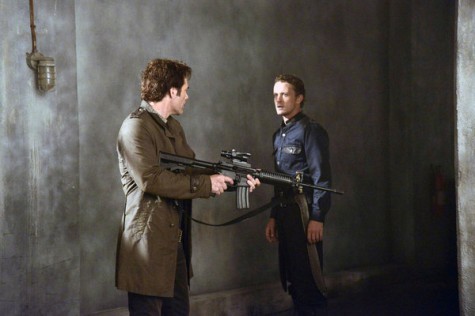 Hey everyone! Happy Monday! Tonight, Revolution saw its fall season finale. That’s right: no new Revolution until the New Year. I have very mixed feelings about that. On one hand, I won’t have to write my hand off taking notes on each episode. On the other, I won’t have anything to write about every Monday night! Some of you are no doubt relieved to be rid of me for a while…But we’re not here to talk about me. We’re here to recap. So let’s do that!

The episode begins in Philadelphia, capital of the totalitarian Monroe Republic, which is led by Sebastian Monroe–Miles’ childhood best friend and fellow ex-Marine. Charlie, who suffered some head trauma last episode, is bleeding again. Desperate for aid, Miles seeks help from 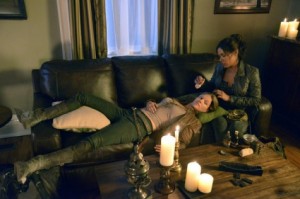 an old friend living in Philly. Major Tom Neville catches wind of this, however, and reports to General Monroe. Against Neville’s advice, Monroe stubbornly insists on staying in the City of Brotherly Love and orders the Major to find and capture Miles.

At the friend’s house, Miles leaves Nora, Aaron, and Charlie to go locate Danny. Not long after he departs, a group of militia storm the house and capture the three. Charlie is sedated and thrown into a prison cell. She awakens to find her mother in the room with her. All along, Charlie’s been under the impression her mother is dead. Her distraught confusion, therefore, is evident.

Neville, meanwhile, has gone on a power trip and set a trap for Miles. He plans to use Aaron and Nora as bait. Back at the Matheson women’s cell, Rachel tries to explain what happened to Charlie but the girl will have none of it. She is determined to find Danny and seems to resent her mother. Enter that SOB from a few episodes back: Strausser. The psychopath is the only man who seems to strike fear into the heart of Miles. Remember? Well, Strausser delivers a very blunt, very cheesy “I’m aroused” line after looking over mother and daughter, then proceeds to remove the two from their cell. He takes them to where Danny is being held. The boy is bloody and beaten, but no worse for wear and relieved to be reunited with his mother and older sister.

Miles, the old fox, has caught wind of Neville’s trap and outsmarts the man. He holds Neville’s wife Julia at knifepoint, demanding that Neville free his friends. “Your wife for my friends.” Julia seems to think Miles is bluffing but Neville isn’t willing to take that chance and reluctantly agrees. He frees Nora and Aaron but is unable to retrieve the Matheson siblings. Instead, he gives Miles the location of their prison cell. Miles thanks him by locking Mr. and Mrs. Neville in a closet.

Meanwhile, the happy reunion of mother, daughter, and son is cut short by head honcho Monroe. He fills Charlie in on Rachel’s role in the blackout and shows the woman a backup amplifier Brad (the scientist Rachel killed to save her family last episode) was working on. Charlie is perturbed and demands that her mother cease helping Monroe. Rachel is put in a tough situation when Strausser wants her to choose which of her children will be killed if she doesn’t help out. Charlie is willing to die if it means preventing Monroe from having power but Rachel, true to her motherly duties, won’t allow it and agrees to finish the amplifier that will restore power in exchange for her kids’ lives. 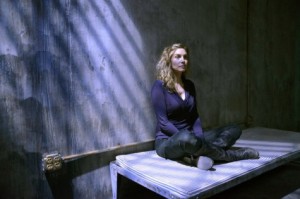 Strausser then continues the cheesy “I wanna rape Charlie” lines as soon as he and Rachel are alone. The frame ends with the woman lethally eyeing her tools. Doesn’t Strausser know how this ends? You don’t mess with a mom  whose kids are at stake! In the other room, Monroe struggles with whether or not he’ll be able to kill Miles if the opportunity arises.We learn (through flashback, of course) that Monroe’s entire family was killed when their car was struck by a drunk driver. Miles was like a brother to him and stopped him from committing suicide. Will he be able to kill his truest friend?

Charlie and Danny, who have at this point been re-interred in a prison cell, jump their guard and bust out, going in search of their mother. At the same time, Miles and Nora are launching a rescue mission of their own to save the two siblings. They leave Aaron outside with a sack of bombs to facilitate their escape. Rachel, in her workshop, completes the amplifier and restores power to Monroe. She’s saved her family, but at what cost?

Charlie and her brother, meanwhile, have been cornered by Monroe’s soldiers. Miles and Nora save them just in time. In the workshop, Strausser makes unwanted advances on Rachel. The woman, who has clearly had enough of his antics, attacks him with a hammer. He intially overpowers her and attempts to rape her. Turning up the seductive charm, she manages to swipe Strausser’s sword and impale him with it. Miles walks in on her staring  over the man’s body. Awkward.

Unable to exchange formalities,  Miles takes his sister-in-law and makes a break for it, only to find himself face-to-face with his old best friend. He tells Rachel to go find her kids  and prepares to take on Monroe in the scene we’ve been waiting all season for. After killing all of Monroe’s guards, the two reach a stalemate. Both have guns on each other but neither can pull the trigger. Monroe attempts to guilt-trip  his ‘brother,’ asking how he could betray his ‘family.’ He pleads for Miles  to come back to the Republic, promising to let his family and friends live. To prove he means no harm, he even drops his gun. Miles is disgusted with what his friend has become, though, and tells him that he’s found a real family in his niece, nephew, sister-in-law, Nora, and Aaron. He even renounces Monroe. Enraged, Monroe attacks him and they end up in a swordfight.

Nora, meanwhile, has succeeded in getting Charlie and Danny out of the building. Rachel catches up with them outside but the way is blocked by guards. Aaron manages to get the bombs to detonate, thus allowing the four to make it out. Miles jumps out of a window after Monroe puts a kill order on him. He catches up with the others and they escape the compound. It’s not over yet! As the group head across an empty field, thinking they’ve won, they hear rotors. Looking up, they spot a military helicopter, gun trained on them. Monroe has power.  End of season.

Ok, so this was, in my opinion, a very lackluster season ending. The tension they’ve been building to with Miles vs. Monroe was very overhyped for such a short sequence. Strausser was too ridiculous to be believed this episode, so I was glad to see him slain by Rachel’s hand. Rachel continues to be my favorite character and I can’t get over how well Elizabeth Mitchell portrays her. The ending was frustrating for me. I was really upset. The helicopter looms over them and then BAM fade to black. So while the cliffhanger may be incentive to watch next season, the rest of the episode seemed all over the place. I feel like there should have been a bit more time spent on the plot development here. A bit of a disappointment to be sure, but I’m not deterred just yet. Revolution will be back in the New Year and the new season looks to be interesting. Rachel certainly made a mess and she seems determined to fix it at all costs. So what did you think of tonight’s episode? Of the show as a whole? Will you be tuning in next season or have you given up on the show? What do you think will happen next? Weigh in with a comment below! That’s all for now. I’ll be back when Revolution starts up again (or maybe sooner)! ‘Till then!