Revolution ‘The Children’s Crusade’ Review and Recap: The Lost Boys 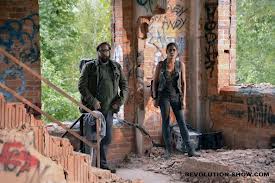 Hey everyone! It’s been a while since I’ve had the pleasure of reviewing and recapping Revolution with you guys. Ironically, that’s because I lost power due to a certain storm named  Sandy. If only I had my very own pendant…Anyway, that’s not an issue anymore because power is thankfully restored and no crossbows were necessary! This week’s episode, ‘The Children’s Crusade,’ takes a Peter Pan twist when Charlie decides to help out a group of orphaned kids. Without further ado, let’s recap!

The episodes starts right in the middle of the action, with a group of militia men branding Charlie with their sinister ‘M’ tattoo. We are then taken to two days prior, with Charlie, Miles, Aaron, and Nora witnessing a wagon go by containing a boy about Danny’s age–obviously imprisoned. Charlie wants to help him but Miles stops her. Further down the road, the group runs into a boy in the middle of the street, not moving. As Charlie races to help him, they are ambushed by a group of kids. A boy named Michael, who seems to be in charge, demands to know what the four have done with “Peter.”

Peter, as it turns out, was none other than the boy Charlie spotted in the wagon. He’s also Michael’s older brother and the leader of the group of orphans. While Nora is moved by the children’s resilience, Aaron is creeped out and compares them to Children of the Corn. It is revealed that the kids were orphaned whena group of militia swept through and massacred their parents for displayi 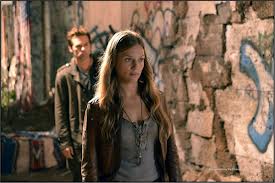 ng an American flag. The children were too young to understand what happened at the time and we are made truly aware of how badly the world has devolved when Michael doesn’t understand the flag’s significance. Michael sets out to save his brother but Charlie intervenes, volunteering to go in his place. She feels connected to the boy because both have brothers around the same age in peril. Aaron is dead-set against it but Miles, for once, agrees with his niece. The party of four set off to track down the wagon.

In the Monroe Republic’s capital, meanwhile, Rachel has been reunited with her son Danny. Danny resents being there but his mother seems content to accept her fate. Monroe meets with her and reveals that he has tracked down one of the keepers of the pendants and is holding him prisoner.

This is followed by the most significant flashback the series has offered us to date. In a laboratory, Ben Matheson and a team (including Grace from a few episodes back) are meeting with a Department of Defense representative over a failed experiment. They were trying to find a way to generate clean energy but instead discovered a way to shut power down. Enter a heavily pregnant Rachel, who we learn is actually in charge of the science company. The DOD rep wants to buy the tech for use in weaponry, much to Rachel’s dismay.

Back with Charlie and company, Miles discovers that Michael and a group of kids have followed them. Charlie agrees to let them accompany her group. As they walk on, Nora stumbles across a ship in the middle of a lake. Miles grimly states that it is a re-education camp where teens are taken to be made into soldiers for the Monroe Republic. Feeling responsible for what happened (the camps were established while he was in command of the militia), he feels it all the more necessary to save Peter.

In another flashback from Rachel’s point of view, we learn that Danny was not forming correctly in the womb. The doctor says there is a low chance of survival for the unborn boy. Back in the present, Rachel meets the captured pendant keeper face-to-face. His name is Brad and he was a member of the science team that discovered the technology. She tries to convince him to tell her the location of the pendant but he realizes she has betrayed them all and given information to Monroe. Later, in a second meeting, Rachel explains that she betrayed the group in order to spare her son. Neville–who has been promoted to Major in charge of intelligence and interrogation–then plays his trump card: he has Brad’s daughter. Rachel is horrified as she was unaware they would leverage the girl against her father.

At the lake, Charlie plans to pose as one of the kids marked for re-education in or 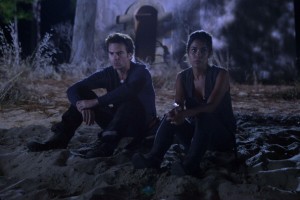 der to get inside the camp. She allows herself to be ‘found’ and ‘kidnapped’ by militia to get in while the others hole up in an empty lighthouse. After making an impression on the camp’s overseer, she is branded, which takes us to the episode’s beginning. Miles realizes that his niece is late and takes Nora to go after her. Aaron is left to mind the children but quickly discovers that Michael has also left to free his brother.

After infiltrating the camp, Miles and Nora are able to free Charlie, who leads them to where Peter is being held. Meanwhile, militia raid the lighthouse. Aaron and the kids are forced to hide but the pendant, which is still in Aaron’s possession, starts the machinery. On the ship, the camp overseer has Michael at knifepoint. Things come to a stalemate until the pendant activates the lighthouse beacon. Seizing the distraction, Miles and Nora kill the militia guards with Charlie finishing off the overseer as revenge for branding her. At the lighthouse, Aaron feels a protectiveness toward the kids he once disliked and kills the militia to protect them.

Back with Rachel, we find out that her invention is ultimately was caused the power outage and she seems to have a plan on how to restore it. In a final flashback, we learn that the DOD representative offered her a deal: in exchange for selling the technology to the Department of Defense, he would get Rachel special treatment to try to prevent her baby from dying in utero. She takes the offer.

A happy reunion between Peter, Michael, and the other kids gives way to Miles demanding to know about mysterious beacon activation. Aaron gives up his secret and explains about the pendant. Miles wants to destroy it to keep it out of Monroe’s hands but Charlie intervenes and subsequently learns of the necklace’s power as well.

In the last scene of the episode, we finally see Grace Beaumont again. Last time we saw her, she was found by a man called ‘Randall’ who seemed to have sinister intent. She is now being held by Randall, who we find out is actually the same DOD rep who bought the technology from Rachel in the first place.

So what did you guys think of tonight’s episode? A LOT of crucial info was revealed to us. We finally got more substantial information on how the power went out and we learned that Rachel, not Ben, was actually the accidental mastermind behind it all. Will Rachel continue to sell out to Monroe to preserve Danny, or will she say enough is enough? What will Charlie do now that she has learned of the pendant’s true power? What will Miles do? Let us know what you think in the comments and don’t forget to catch Revolution every Monday night at 10/9C on NBC! ‘Til next week!