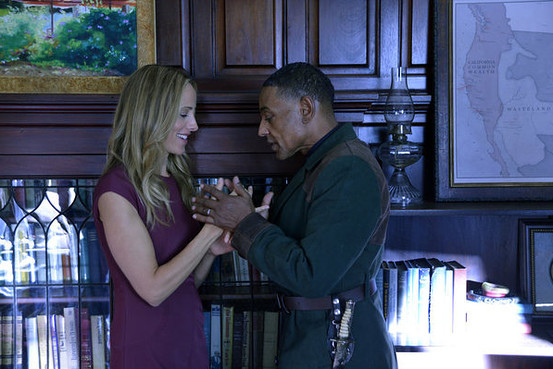 Hey everyone and happy Monday! It’s that time of week again: Revolution time! Let me start by saying that in the first few episodes, I wasn’t a big fan of the show. I thought there was too much focus on crazy action and less on plot, characters, depth, or anything else really. Well my opinion has been changed over the course of these past few episodes. The show is getting stronger every week, which I’m sure makes many viewers (myself included) very happy! This week puts one of my personal favorite characters–Nora–in a bind when she is forced to pick between her family or a promise she’s made 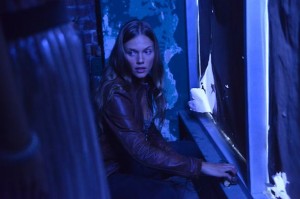 The episode starts with the usual suspects: Miles, Charlie, Aaron, and Nora, at a bridge 290 miles from their goal: Philadelphia, capital of the Monroe Republic. Nora pays the militia guards off to grant them safe passage but Miles is aware that it’s a trap nonetheless. A covert assassin and his men fire on them and the four are forced to flee into an alley way, taking cover in an abandoned building. Miles knows their attacker–a guy called Strausser. Nora also attests that this man is bad news. Miles, who is genuinely terrified of Strausser, decides to reroute the group to a bridge a hundred miles away.

The audience gets a first-hand look at how psychotic Strausser is when he kills his own guy for losing the group. He then pulls his trump card and demands they “bring out the girl.” As Miles, Charlie, Aaron, and Nora move out, a flare is shot into  the sky. Nora hears her name being called. Strausser says he has ‘Mia.’ Nora sees a girl bound, gagged, and strung up by her arms and realizes that the militia have her little sister.

FLASHBACK! I must say, JJ Abrams is very fond of using flashback storytelling isn’t he? Lost had it, Alcatraz had it, Revolution has it. Anyway, we’re transported to two months after the blackout. Nora and Mia, both fifteen years younger, are hiding in their home as looters tear it apart. The next morning, Nora finds her mother is dead.

Strausser, the twisted fiend that he is, uses psychological torture against Nora, telling her that her sister will slowly suffocate as she hangs there. She’ll die within an hour unless Nora gives up the pendant and Miles. They regroup to plan a strategy. Miles tries to break the necklace but finds it is too durable. Nora vows not to give Strausser what he wants, instead planning a way to get Mia out.

In the Monroe Republic, meanwhile, lover-boy Jason (also known by his alter-ego Nate) is getting the buttkicking of a lifetime for apparently trying to get information regarding Strausser’s mission. This is, no doubt, because he is worried for Charlie. Monroe regards this as treason, though, and says he will be sending Jason away on a diplomatic mission to California. Major Neville is very disturbed about the fate of his son, as the Californians are “known for sending their boys back in boxes.”

Back to our heroes, Nora has rigged several buildings to explode simultaneously, killing a good chunk of Strausser’s men. In the ensuing chaos, they free Mia and flee to safety. Mia disapproves of Nora’s choice to help Charlie get her brother back but offers to help them out. She tells them of a smuggler she knows who can get them across the river without needing a bridge.

Nora has another flashback, this time with her and her sister arriving at their father’s house in Galveston, Texas. The place is also ransacked but Nora is adamant their father will return. In the present, it is evident he never did. Mia, who has been bounty-hunting for a year, tells Nora she went back to Texas and found their father. Nora is overjoyed. Mia tries to convince her sister to abandon Charlie and their ‘suicide mission’ and head to Texas with her to reunite with their father. Though tempted, Nora feels she can’t break her promise and says she’ll go afterwards. Disappointed, Mia offers to get them across the river but will go no further. This point is moot, however, when they discover Strausser has beaten them to the smuggler, killing him and torching his boat. 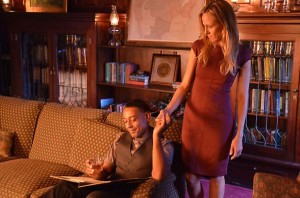 In the Monroe Republic, a familiar face makes an appearance: Major Neville’s wife Julia, who is far from the benign, mild-mannered woman we thought she was. Julia has a maid reveal to Neville that one of Monroe’s generals may be a traitor. The general’s son is a rebel working on the inside, with his family collaborating to keep this hidden. Julia wants to use this information in exchange for keeping Jason from going to California.

Back at the river, Mia decides she can help no further and tries one last time to convince Nora to go with her. The rebel woman declines, however, still feeling she owes it to Charlie. Charlie overhears and intervenes, telling Nora she should go and be with her father and sister. Reluctantly, she takes this advice, leaving our once five-strong group down to three.

Meanwhile, Monroe has been quite busy. Acting on the tip from Neville, he has the rebel son killed and his father interrogated with force. Neville successfully gets Jason reassigned to a post in Philly after promising to keep his son in line.

Nora and Mia, now on their own, are walking when they are suddenly confronted by Strausser. Nora is wary but Mia approaches the man, giving him the pendant, which she has stolen from Aaron. She reveals that she made a deal with Strausser. In exchange for giving up Miles and the necklace, she and her sister are free to go. Nora is furious and demands to know whether their father is even still alive. Mia breaks down, admitting she made the whole thing up to get Nora away from the others. Bitter and betrayed, Nora storms off, all but renouncing her sister.

Aaron, meanwhile, realizes the pendant is missing. Before they have time to let this sink in, Strausser’s men fire on them, forcing them to take cover behind some cars. Nora, hearing the gunfire, finds the location and kills one of Strausser’s soldiers, swiping his gun. Miles surrenders and distracts the man, buying Nora time to take out the other militia. Freed, Miles engages Strausser in combat but is forced to flee with the others. They are cornered at a white-water rapid and jump in to escape. Safely on the other shore with Strausser and his thugs unable to follow them, Miles confronts Aaron over losing the powerful necklace. The conflict between these two, which the writers have been hinting at for a while, seems to be coming to a head.

In Philly, Julia reveals her true a 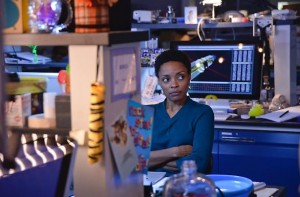 mbitions to her husband. She feels Monroe is unfit to lead and wants Neville to be in charge instead. It is hinted she’s secretly been pulling her husband’s strings all along, getting him into the powerful position he currently holds. Monroe, meanwhile, brings the pendant to Rachel so she can begin to restore power. In the final scene, we once again are treated to Randall, the mysterious DOD agent, making an appearance. He shows Grace the signal he has on the pendant and sends her to retrieve it.

Okay, I’ll admit I was partial to this episode because, as I mentioned before, Nora is easily my personal favorite character and I loved the back story they’ve built up for her. Her sister’s betrayal was a bit predictable, I’ll concede that. All-in-all, still a strong episode, though. What did you think? Is this the last we’ll see of Mia? What about Strausser? Will Rachel really help Monroe restore power? And who is Grace, really, and why is she so capable of retrieving that necklace? Lastly, what will Neville do? Will he betray his commanding officer at his wife’s behest? Guess we’ll have to wait and see! Please speculate in the comments below, though, we’d love to hear what you think! As always, Revolution can be caught every Monday at 10/9C on NBC. Until next week!