There were a lot of familiar characters that showed up in this week’s Supernatural and I for one was happy to see them all.   We got our much-anticipated return of Castiel, Mrs. Tran and Kevin, sophisticated but goofy looking Alfie and Crowley.  We also saw a familiar face in the Si-fi world when Amanda Tapping graced out T.V. at the end of the show, but I’m getting ahead of myself.

The park was full of young children playing, finger painting and a rambunctious little boy was making a mess out of his paints.  His teach takes him to the bathroom to get him cleaned up and there her eyes turn black and a freak windstorm blows over the park and the five-year old vanishes.  (Um little Dude, Where’d you go?)

Classic rock and the roar of the Impala…Dean in his natural habitat cruising down a rural highway eating a bag of chips.  (This is the Dean I like to see) He spots a man walking down the road and who does it turn out to be, but Cas.  Our old friend Cas, but just as quick as he turned up he is gone again leaving Dean with guilt riddled feelings. 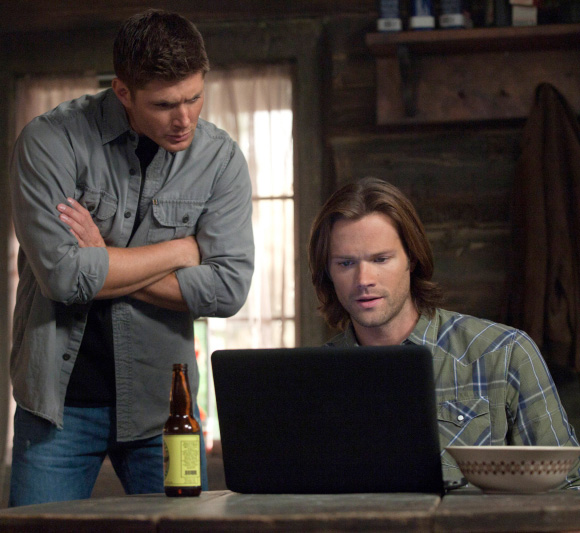 Arriving at the cabin Dean is still puzzled about what he thought he saw, but pushes it aside as he and Sam try to figure out about the missing people.  Yes I said people.  The little five-year old boy isn’t the only one who has gone missing.

Quickly we learn where those people have gone.  It seems that Crowley is still up to no good.  He has captured the Angel, we meet in Let’s Talk About Kevin, Alfie and tortured him into telling the names of the Prophets on earth.  With that knowledge Crowley has kidnapped all of them, but they do him no good because there can only be one Prophet at a time and he hasn’t had any luck finding Kevin Tran since he and his mom took off.

Walking through a rickety door Kevin is doused with holy water and from his reaction it isn’t the first time.  (hahah Mama Tran I love the way you think).  The Tran’s have been moving around and staying under the grid from Demons and the Winchesters.  Mrs. Tran has hired a witch, named Delta Mendota, to help them obtain the ingredients they need to make the demon bomb so they can fight back and quit running.  (When I found out she hired the witch from Craig’s List I had to retract my statement about the way she thinks.  What is she doing?)

The boys are diligently looking into the disappearances and while pulling an all nighter Dean once again spots dirty, unshaven Cas but this time outside of the motel’s window.  His guilt  rising to the surface he lets out some of his frustration on Sam telling him that he tried so damn hard to get them all out of Purgatory, but Cas just didn’t try.  Sam assures him that he did what he could and that he needs to move past his survivor’s guilt.

Finally Cas is there, really truly 100% there.  Seeing Cas in front of him alive makes Dean question how he got there. Cas doesn’t have a clue as to how.  One moment he was running and hiding from Leviathan and the next he was on the side of the road in Illinois.  Dean is uneasy with it and his guilt continues to grow.

The witch Delta shows up at the Tran’s location to bring them the stuff, only to surprise them that she has betrayed them and sold them out to Crowley who shows up behind her to take Kevin.  He orders his lackey to kill Mrs. Tran, despite Kevin’s protests, and disappears with Kevin in tow. However, that Mrs. Tran has learned a thing or two about protecting herself against demons and gains the upper hand with the lackey.

With the help of Cas the boys learn that the missing people are Prophets, but none of them know who they are or who will take Kevin’s place in the event of his death.  Learning that there can only be one Prophet Sam asks Cas about Chuck and the only deduction Cas can come up with is that he is dead since Kevin is the current Prophet.  (NO!!  Chuck can’t be dead.  Wait I had a theory about him early on that he wasn’t a Prophet.  Could I have been right?  Could he really be……..)  With their new knowledge it isn’t long before they put two and two together and figure out that Crowley is behind the kidnappings.  As soon as they make this discovery Mrs. Tran reaches out to them.

Kevin thinks his mother is dead and knows that once he reads the tablet Crowley will kill him too so he takes a stand and refuses to read the tablet.  Even when Crowley kills one of the future Prophets in front of him Kevin stands his ground.  It takes getting his finger cut off by Crowley to agree to read the tablet. 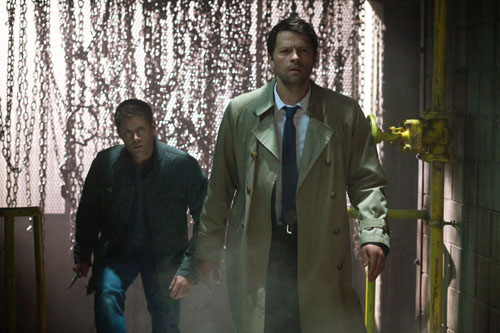 Using the captured Lackey the boys find out where Crowley is keeping Kevin and the others.  Locking Mrs. Tran in the car Cas, Dean and Sam head in.  Sam is assigned to find the missing people while Cas and Dean head for Crowley and Kevin.  Cas isn’t completely back but he goes in full force after Crowley where they have one bitchin’ showdown.  Cas looked magnificent all powered up and ready to rumble with Crowley.  Crowley tries to call Cas’ bluff, but seeing his eyes glow blue and his angelness surround him he gets scared and tries to snatch the tablet, but Cas, in full power, breaks the table and Crowley gets away with only half of it.

It is decided that Garth would protect the Trans and that they would lay low until it is safe.

During this entire episode we see Dean’s flashbacks of his escape from Purgatory and how he blames himself for not getting Cas out with him, but at the end Cas makes him see the truth.  The truth was that Cas let go of Deans hand.  He didn’t want to be saved.  He didn’t think he deserved to leave Purgatory.  He felt he needed to stay and repent for all the sins and wrong doings he did in heaven and earth. 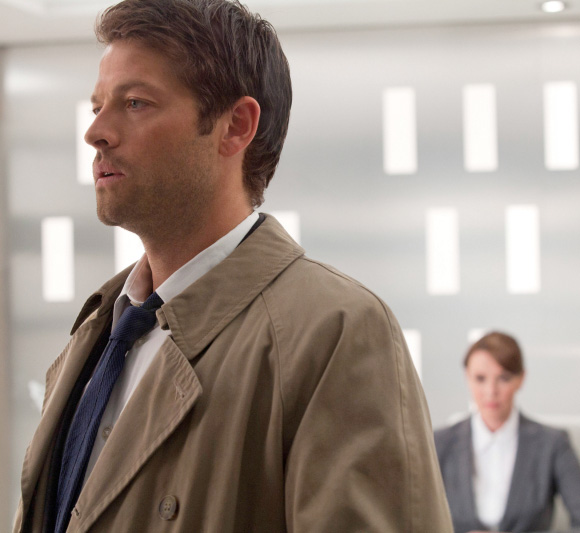 Cas is pulled away from the boys and finds himself at “home” in front of a woman behind a desk.  She introduces herself as Naomi and she tells Cas that he was brought back from Purgatory to report to her about the Winchesters.  When Cas  refuses she requests a report and he starts to blurt things out.  Naomi then tells him that he will report regularly to her and he won’t remember anything about it.  With that she sends him back to the boys and neither he or them know he was gone.  (dun dun dunnnn…..what is that going to mean for the boys?  Why do the angels want a report out on them?)

This week’s episode was great.  We saw familiar faces and met new ones.  I’m really eager to see the upcoming season and how all of this is going to play out.  I really thought Amanda Tapping, who has been in shows like Stargate SG and Sanctuary, did a great job as Naomi and I look forward to seeing her role expand as Cas reports to her.  I give this episode two thumbs up.