AAAWHOOGA, Swat, Bang, Pop what do these things have in common?  Answer: Cartoons and apparently Supernatural.  Nope you heard me right these silly phrases and cartoon like antics were a big part of this week’s Supernatural and I have to admit that it was a bit zany for my taste, but oddly I enjoyed it. 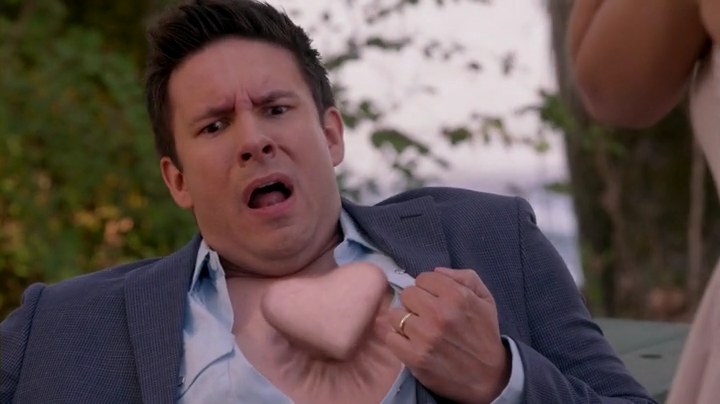 Awe so romantic young lovers in a park.  Suddenly Mr. Romantic begins to have an attack of some kind.  Dropping to his knees we see his heart banging against this chest as the woman calls out to him asking if he is okay, and then we are left stunned as his heart actually dejects from his chest.  (Well that was messy.)

We learn that Cas is having a hard time reconnecting to Heaven, actually he doesn’t want anything to do with it anymore, but his need to help people has led him to the path of becoming a hunter.  He even read about heartless and decides he needs to check it out.  However Dean’s big brother nature kicks in and insists that Cas hunt with them so he doesn’t get himself hurt.

While getting the skinny of the man whose heart leapt from his chest the guys learn that he was having an affair, but before that Cas found out everything else like his past bladder infection by sniffing the remains.  (Gosh Cas is better than a bloodhound..got to remember to get me one of them!)

Cas takes on his first role as hunter when he interviews the deceased’s wife.  Acquiring a strange accent  he grills her asking why she killed her husband.   When Dean pulls him away he seriously tries to explain that he was doing the bad cop bit.

Meanwhile, while the Winchesters and Cas were conducting their interview a man walks off a ledge, hovers for about ten seconds, cheers that God wants him to live, then falls to his death.  They show up at the new death scene and as the local cop explains what happens Dean draws a conclusion that it parallels a cartoon.  Cas, who isn’t familiar with  Bugs Bunny and company, doesn’t understand why anvils falling on the head of the chased is hilarious.  That is until they go back to the motel and he watches none other than the road-runner.  Drawing a paradigm between humans relationship with God he finally finds the scenario funny. 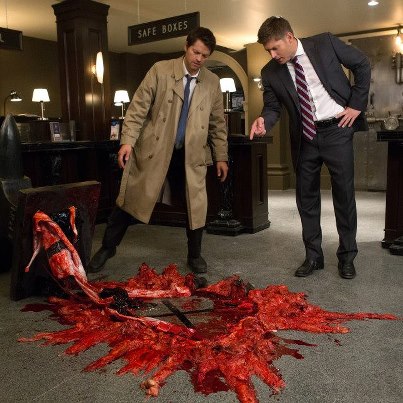 Picking up another looney crime on the police scanner the guys find themselves at the scene of a bank robber gone wrong.  It seems as if the security guard was killed when an anvil was dropped on his head.  The criminal the local police are calling the black hole, due to the always leaves two big, black circles painted on the walls behind,  has struck again.  When Dean and Cas are alone Cas is able to move the anvil to reveal that X marks the spot.  (Blech….this is even more messy than heart guy.  Somehow I don’t find this as funny as I do when it is animated.)  Dean then provides us the rules of cartoon land; which are as follows: A pretty girl can make your heart leap out of your chest, Anvils fall from the sky and if there are black holes you can walk right through.  (Is the bank robber really using the rules of cartoons to his advantage?  Sweet!! Well not for the poor security guard.)

Sam has done some research and found out that a bank was being robbed in the same areas and the same times as heart guy and bye-bye birdie.  He also found out there were some homes in the area that were robbed as well and during that time cartoon things happened liked a man hitting his head and sprouting a 4 inch bump or a boy running into a wall and hearing birdies.  The victims of the house robberies all live in a retirement home.  (And the boys are off…..be vewy vewy quite I’m hunting Wabbits.)

During their investigation at the retirement home, Sam sees a picture of their dad’s old friend, Fred Jones, things start to fall into place as they remember that Fred is psychokinetic. However, when they go to talk to Fred cartoons are playing but Fred is not responsive. Dean decides to test the cartoon theory by hitting himself in the head causing stars and birdies to sing. (Fred is our culprit, but why? He isn’t really here so what could he want with the money?)

After another death, this time at the nursing home, the boys find out that Fred is gone and one of the nurses is wearing a bracelet that had been stolen from one of the residents.  She tells them she got it from her boyfriend and the chase is on.  Arriving at the boyfriend’s house they find him shot.  Cas heals him and he explains to them that he and Dr. Mahoney, Fred’s doctor at the nursing home, have been using Fred’s ability to supplement their incomes.  The boyfriend was shot because when Dr. Mahoney told him he was going to kill Fred after this last robbery boyfriend tried to stop him.

The gang arrives at the next robbery site.  Dean heads into the bank and Sam and Cas go to look for Fred.  Fred is found in a van outside of the bank.  While Dean fights with Dr. Mahoney Cas and Sam enter Fred’s mind that is filled with cartoon images and TV looking feed.  After some convincing, Sam’s speech also hits a spot in Cas’ mind, Fred helps the boys stop Dr. Mahoney by making him shoot himself.  Fred doesn’t want to hurt anyone else so Cas helps him to not be so dangerous.

Cas has decided to go back to heaven, but before he is able to tell the Winchesters he is called back by the angel from the last episode.  He tells her that he wants to make up for what he has done and she said that he is by following her rules and he is not allowed back into heaven until she rings her bell.  He is returned to the boys with no recollection of being pulled away and tells the boys he wants to stay with Mr. Jones for a while to make sure he is okay.  (I have to admit that the last shot of Cas and Mr. Jones sitting in front of the window was such a beautiful shot.  Cas AKA Misha looked absolutely angelic.)

During this episode trigger words like “lie” and “dream world” would send Sam into his memory regarding Amelia.  His memories showed us viewers that he and Amelia had moved in together and her dad had come to visit.  It seems as if daddy isn’t a big fan of Sam.  Amelia’s dad is trying to get her to come home but she is insistent that she is happy with Sam.  This go sour when she gets a phone call telling her that her husband, Don, is still alive.  (dun dun dun duuuuuuuu…..but didn’t we see him leave her bed when Dean called at the beginning of the season?)

Well as I said this episode was a bit zany and weird, but at the same time I liked it and it made me laugh.  With the physical gags such as Dean walking through the black hole, getting hit in the face with a large frying pan and shooting a gun that released a flag that said bang it really made me chuckle.  Hearing Dean use the old cartoon phrases such as “It’s Wabbit Season”, “What’s up Doc” and “That’s all folks” triggered my brain to recall some of my childhood and that too put a smile on this gals face.  So I’m going to leave you with this…..It wasn’t one of my favorite episodes, but I am really looking forward to seeing it again.

Until next week my wayward children I leave you with a clip of next week’s episode Citizen Fang: