Has another week of Supernatural already passed us by?  It sure has and I really enjoyed this weeks episode so much more than last weeks.

A man, working at night under his car (This can’t be good), his wife approaches and he asks her to get him a beer.  Angrily the wife yells, “Why don’t you have Sara Alcot get it for you” and kicks the jack out from under the car.  Climbing into the car she starts it up and drives over her husband. (Yep no good at all.)

Queue our boys.  Dean tells Sam they have a case causing Sam to jump down his throat.  They have an intense conversation about Dean keeping Benny a secret from Sam and more importantly the fact that he is a vampire and is still breathing.  Dean stresses that Benny is his friend and the reason he is out of Purgatory and Sam couldn’t resist bringing up Amy, his supernatural friend that Dean took out.  Dean reminds Sam that people change and how they let the werewolf girl go and if another hunter took Benny out then so be it, but he wasn’t going to be that hunter.  Sam isn’t happy but climbs in the car with Dean to seek out the new case.

They arrive on the scene posing as FBI, their typical cover, and begin to ask questions.  When one of the cops mentions that the Texas Rangers were already there they are directed to a goofy, skinny guy dressed in fringe and a cowboy hat.  It’s Garth from season 7!!

It isn’t long before the boys realize that Garth has become the new Bobby and Dean isn’t too happy about that, telling both Sam and Garth to shut their mouths when it is suggested that he is the new Bobby.  Garth gives an order, which Dean is baffled by, and introduces the boys to the beginning couples son Scott.

During their investigation of the crime scene they find ectoplasm, but it isn’t the normal ectoplasm because it is green.  Garth gets a phone call from the corner that the victim had the world Alcot carved on his chest.  During the interview with the wife they find out that she doesn’t remember what happened and that Sara Alcot went to prom with the victim when he and wife, then girlfriend, were on a break.

At lunch Dean reveals to Garth that for the past year he had been in Purgatory and that is why he was M.I.A.  Garth tries to use Bobby’s famous phrase “Balls” and not only is it uncomfortable for us but for Dean as well.  Garth informs the boys why Missouri still hangs the confederate flag and we learn that Garth went to college to be a dentist and his first hunting case was the tooth fairy.  (I so couldn’t help snicker at this) 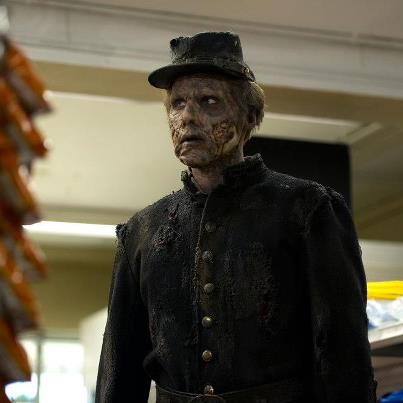 The next act of violence is when Scott meets someone from his past at the market and when the guy tries to express his condolences about his parents and asks if there is anything he can do, Scott replies with “How about get me my money back” and proceeds to use a shovel as a murder weapon.  In the mirror we see a confederate soldier ghost possessing Scott.

At the crime scene Garth sports one of Bobby’s old baseball hats that Dean confiscates and the tear breaks up. Sam goes to interview Sara Alcot and Dean and Garth head to try to find out what they are dealing with.

Interviewing Sara Alcot Sam finds out that she and the man killed only shared one night together over 30 years prior but his wife always thought she was a threat.  Garth and Dean find out that they are dealing with a specter (An Avenging Ghost), but not before Dean harshly reminds Garth that he isn’t Bobby and Garth telling Dean that Bobby didn’t just belong to he and Sam and he was just trying to take what Bobby taught him and do something with it. 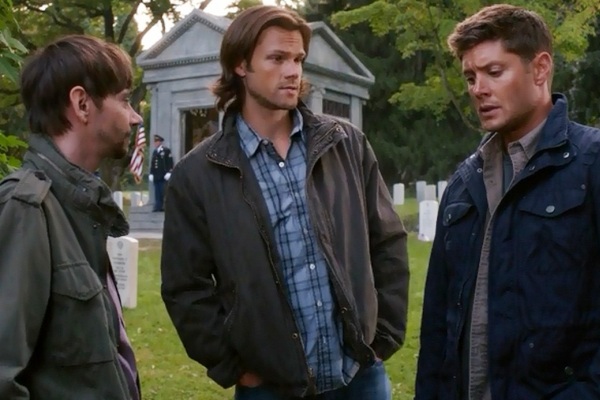 Their investigation leads them to Missouri’s own Unknown Soldier.  They break into the tomb and salt and burn the bones thinking the end of their problem is there.

Meanwhile at the jailhouse Scott has a asthma attack and the cop goes to grab his inhaler out of evidence.  When Scott’s belongs hit his hand he picks up a gun and shoots the sheriff who he has a grudge against for making him write up all his paperwork.  Next the cop that tackles the cop who shot the sheriff takes off to the hospital to seek out his own vengeance.

While Dean rushes off to stop the cop Sam and Garth head to the library to learn more about the Unknown Soldier where they find out that the object that allows the specter to travel is an old penny.  Dean gets into a conflict with the cop who can smell the grudge he is holding against Sam and shoves the penny into his hand.

Not being able to reach Dean; Sam and Garth head to the hotel where they find a possessed Dean waiting for them.  Dean lets all his pent up anger, about Sam leaving him in Purgatory for a girl and how he feels that Sam blames him for the life they live, out and he and Sam get into a fight where Dean has the super strength of  the specter.  Garth is able to distract Dean and when he is unsuspecting clocks him one and takes the penny away.

Not having a grudge with anyone Garth is able to destroy the penny and he and he and Dean have a moment where in his own way Dean gives him permission to carry on Bobby’s job.  Sam tries to bring up Benny again, even telling Dean he may be the hunter to take Benny out and Dean leaves it with we will cross that bridge if we come to it, but his look speaks volumes.  Could Sam going after Benny cause more conflict with the brother’s and would Dean choose Benny over Sam?

During the episode we see more flashbacks of Sam’s life with Amelia.  We learn that they were drawn to each other because they both felt lost after tragic losses.  His was Dean and hers was the loss of her husband.

I have to say that I was impressed with this week’s episode and so far it has been my second favorite of the season.  I felt the show was back on track and even though the ending made me feel nervous for the brothers, I loved every minute of the show.

Next week’s show looks insane. If you don’t believe me just take a gander:

Until next time my wayward sons and daugheters!