“THE WAIT IS OVER! THE TRUE LIVES OF THE FABULOUS KILLJOYS LAUNCHES IN JUNE 2013!

Welcome to Battery City, where the disease is the cure!

In My Chemical Romance’s critically acclaimed album Danger Days: The True Lives of the Fabulous Killjoys, the Killjoys fought against the tyrannical megacorporation Better Living Industries. It cost them their lives, save for one—the mysterious Girl. Today, the followers of the original Killjoys languish in the desert while BLI systematically strips citizens of their individuality. As the fight for freedom fades, it’s left to the Girl to take up the mantle and bring down the fearsome BLI or else join the mindless ranks of Bat City!

As announced at New York Comic Con, an early look into this world will be published as part of Free Comic Book Day 2013, with the first issue hitting stands the following month on June 6!” 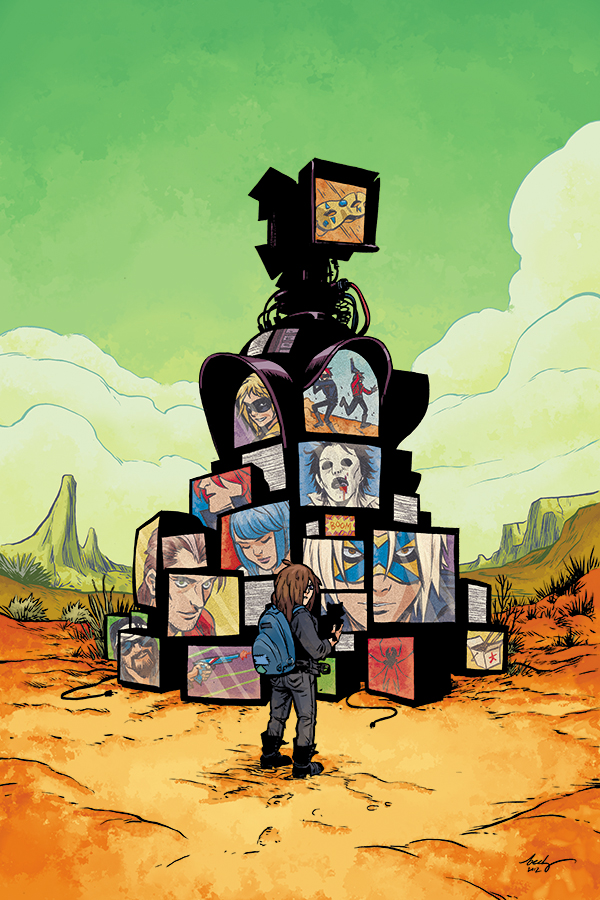 “The original idea for the comic informed the record — The record helped refine the idea, and then Becky had done a drawing of the Girl for the single ‘The Only Hope for Me Is You’ and I saw it and thought, this is the comic. It’s basically the last video, it’s the last part of the Killjoys story, while at the same time being totally its own thing.” – Gerard Way

“I think we have created a broad range of characters here — A lonely teenage girl hiding from her past in the desert. A couple of android call girls wanting nothing more than to be together. An aging assassin with a secret that could destroy his life . . . Even though these characters are living in a bizarre sci-fi world, their struggles are the same we face in our own.” – Shaun Simon

“The world of the Killjoys is full of visual opposites—from sprawling deserts to urban junkyards—and a cast of characters to match — It’s been a challenge to encompass all of this in my art, but woven into the world building is a human spark that lights this story on fire and gives me so much to draw from.” – Becky Cloonan

Epic times! Can’t wait for June 6th 2013, and it is so awesome to see all the detail work on that amazing promo art up close. Who are all those unfamiliar faces on those screens? I don’t know, but I can’t wait to find out!