“Dark Skies” Trailer: Close Encounters Get Too Close For Comfort

In Dark Skies, it all starts off with barbeques and white picket fences in the quiet suburbs of Anytown, USA, but apparently the tranquility doesn’t last long.  Soon the Barret family finds themselves living a very dark version of Close Encounters of the Third Kind with a bloody dollop of Alfred Hitchcock’s The Birds piled on top.

Things are being rearranged in the Barret’s home and their youngest child has strange marks on his torso.  The children aren’t the only ones being affected though, the parents begin to see marks on their own bodies and start acting strangely.  Enter the “expert” on these matters who ask them ominous questions like, “Have you experienced any unexplained illnesses or blackouts?” and “…the feeling that you might not be in control of your own body?”  In the trailer we don’t really hear any advice from this expert, just warnings that they can’t escape and their family will eventually be taken.

Remind me not to hire this guy for therapy of any kind…ever.

Like all creepy aliens who want to eat your face, these guys have the ability to turn screws from the other side of a wall and have an obsession with extremely bright lights which they like to shine through cracks in doors.  And again like all the creepy, stalkery aliens they don’t seem to be content to just knock your butt out and take you away.  No, that’s too easy and practical.  As if it weren’t bad enough that you’re probably getting probed in who-knows-where they’ve got to freak you the hell out like you’re living in some otherworldly haunted house before they finally take you away.

But take you away for what purpose?  To…to serve man?!! 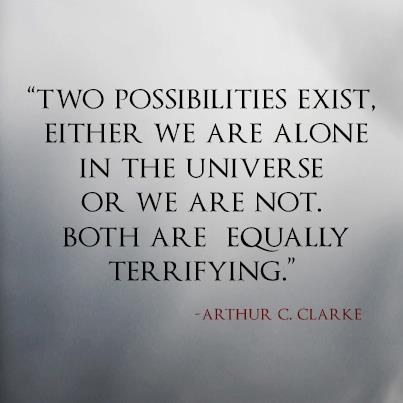 I’m really not grousing here, more just poking fun at the alien-abduction tropes without which, this kind of movie would be very dull.  Just imagine if the aliens came,  put everyone to sleep, then took them.  How boring is that?  Maybe they have, but those aliens don’t get a movie made about them.  It’s the smart aliens who mess with our heads, and maybe the opposite end, who get all the attention, and my money for the movie.  I’ll be parting with some cash when Dark Skies premieres on February 22, 2013.

Enough lip from me, read the official plot outline which should help wash away the memory of my curmudgeonly rantings:

From the producer of Paranormal Activity, Insidious, and Sinister comes Dark Skies: a supernatural thriller that follows a young family living in the suburbs. As husband and wife Daniel and Lacey Barret witness an escalating series of disturbing events involving their family, their safe and peaceful home quickly unravels. When it becomes clear that the Barret family is being targeted by an unimaginably terrifying and deadly force, Daniel and Lacey take matters in their own hands to solve the mystery of what is after their family.