Supernatural: LARP and the Real Girl ~ Recap and Review

Welcome back supernatural fans.  I hope you had a great week and were as excited to watch this week’s episode as I was.

Let’s dive into this week’s episode, shall we?

Goodness gracious I bet nobody has ever thought, “Hey, my punishment for having an argument over a game is being torn apart by an invisible horse and carriage”, but that is just what happened as Supernatural opened this week.  Only the creators of this shows would come up with something like this and that is one of the many charms of this show that has kept it going to Eight Seasons.

When Sam and Dean get the call to go investigate the bizarre death Dean is trying to lighten the mood in the Impala by suggesting that they go out and find some fun.  Sam doesn’t seem to be into the death.

During the investigation the boys find two clues.  The first is when Sam finds a tattoo on one of the limbs of the victim of a cool tree looking thing and second, the man’s house is filled with toys and they even find chain mail in his bedroom.  The police tell them that their main suspect is another guy who they had in custody that had sent bizarre texts to the victim the night before after having a fifteen minute phone conversation with him.   The boys interviews this man and they find out that both the victim, Ed, and the suspect, Lance, are involved in a role-playing game called MoonDoor.   Soon after the boys are done with their interview Lance sprouts a tree tattoo and bleeds out of all of his orifices and dies. 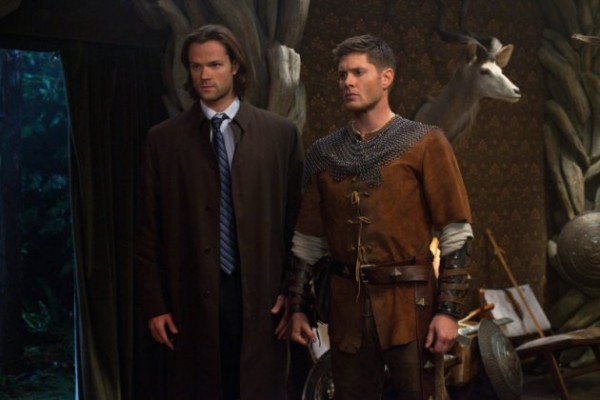 Checking out the website for MoonDoor the boys recognize a familiar face.  It is great to see Felicia Day again reoccurring her role as Charlie Bradberry.  Heading off to the game Dean seems to be enjoying the mid-evil costumes, weapons and the world in general while Sam just seems irritated and annoyed.  Finding Charlie they explain that her two missing subjects have been killed and that the people of MoonDoor are in danger.  The boys get into an argument when Dean wants Charlie to leave so that she is safe and Sam wants her to stick around because they can use her help in exploring the “realm” of MoonDoor.  Charlie settles the arguments by telling them that a Queen cannot leave the people behind to let them die that she was going to stay and fight for the new life she has created for herself.

At this point the boys split up, Sam goes down to the tech tent to do some research on the other people who had gotten hurt prior to the two killings, while Dean dresses up as a character from MoorDoor, and heads out to question people with Charlie.  After research and questioning they  find out that the tree tattoo is a Celtic symbol for the tree of pain which is connected to fairy magic.

When the only  “clan” left to interview are the Shadow Orcs it is decided that Joe, one of the higher people in the land of MoorDoor,  and Dean would do it and they send Charlie off to meet up with Sam.

Finding out that some of the Orcs have also been marked with the tree of pain and that they have taken it as their family crest Dean realizes that they are not behind the killings and the torture.  Meeting back up a Sam it is realized that Charlie never met up with Sam and that she is missing.

Meanwhile, Charlie has been kidnapped by a fairy who explains that she has been pulled out of her realm  into ours and is being forced to torture and kill people by her “master”.  The only way the fairy can be freed is by destroying the book of magic used to summon her to this realm.  Joe is determined to go with the boys to rescue the Queen and when they come across a tent that was set off from the rest they walk in on Charlie and her captor making out. 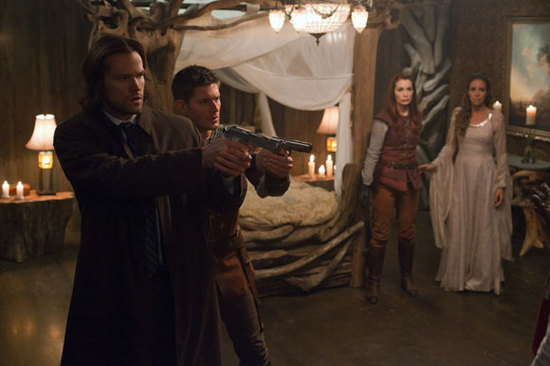 Noticing who the boys are with the fairy yells that her master is there and that everyone should run.  Having a fairy on his side Joe gives the boys a run for their money but when the book falls from his garment Charlie takes the opportunity to save the damsel in distress and destroys the book.  Dean finally knocks Joe out and the fairy goes back to her world and takes Joe with her for punishment.

Getting ready to leave Charlie tells the Winchesters that she is done running and that “getting away” isn’t what it is cracked up to be.

Turning to Sam, Dean inquires about what’s next since having fun is off the table.  He also tells him that he gets it, he gets that no amount of fun will replace what Sam has given up for the hunt.  Sam appreciates the gesture and having done some thinking himself says that having a little fun will help them both.

This week ends with the boys in full Mid-Evil garb, Dean quoting the Braveheart speech and both boys having a little fun to get away from their lives for a little while.

I have to admit this is my new favorite episode of the season, followed closely by Bitten.  Despite the brooding Sam I felt that this week had a little bit more of the old (Season 1 & 2) feeling and vibe the show started with and I have been waiting quite awhile to return to the bliss that made me love this show.  It has been missing for so long I was afraid the euphoria would not return.  I was also a bit glad that he story-line didn’t revolve around CAS and the mystery in heaven.  Don’t get me wrong I LOVE Cas, but sometimes just seeing the two boys dive into a hunt with the complications of Cas’ drama or heaven’s involvement is nice.

This week I want to take a little bit of time and talk about some of the great moments from this episode because I found myself laughing out loud for the first time this season.  The first moment I want to talk about was when they were talking to Charlie and Dean was looking over her attack plans and was giving her pointers on where to put her archers and warriors.  His face was classic and even when Sam tried to get them back into the investigation he was still moving pieces and giving her eye hints.  That was so great.  Another great moment is when Sam informs Charlie and Dean that Lance was killed with Belladonna and they both looked at him and said, “The Porn Star?”  Their faces…OMG I was dying. There were other great moments and quotes and facial expressions I loved this episode, but these two were my favorites.

I also want to talk about Charlie for a moment.  If she didn’t like girls she and Dean would be perfect for him.  I think Felicia Day’s  portrayal of this character is magnificent and I hope we get to see her more as the season goes on, but that may be wishful thinking.

Well this is what I have for you this week dear readers.

Until next week…..I am going to leave you with this: